Breaking News
Home / Comment / Declare victory in Afghanistan and bring the rest of our troops home!

Declare victory in Afghanistan and bring the rest of our troops home!

We can divide the time spent in Afghanistan into two parts. The first part is the 2001-2014 campaign ‘Operation Enduring Freedom’. The second part is the campaign since then, officially named in 2015 ‘Operation Freedom’s Sentinal’.

I’d like to point out this isn’t an judgement or blame game, I’m not going to be doing the whole “Bush did this”, “Blair did that”.    It’s an argument almost two decades in the making and happened whether you support it or not.    This is meant to be more of an assessment as to why we’re there and whether we’re fighting (and funding) a cause that may well be over.

Overall our troops have been on operation there for the past 16 almost 17 years. That means that men and women who were there at the beginning of our campaign may have had a child now serving in the military themselves.   We’re reaching a two generation war, the batton passed from Father to Son.

If I ask our purpose there does anyone really know the full answer? We followed the American coalition into the war, who responded to the first US homeland attack by a foreign attacker since Pearl Harbour.

So began the ‘War on Terror’.   Now I think any sane minded person can agree that terror is bad but it’s very hard to ask your Soldiers to a war without a specific target or aim.   You can argue our coalition wanted to get the masterminds behind the September 11 attacks, but Osama Bin Laden was killed by the elite Navy Seals almost seven years ago, yet still we’re engaged in combat.    Well perhaps then we’re putting an end to the whole of Al Qaeda, but the enemy are vicious guerillas who know their land better than the West ever can, similar to the prolongued war in Vietnam if you ask me.   Perhaps we’re actually just trying to put an end to terrorism. I think after 17 years we’ve realised an ideology cannot be taken out with rifles, as preferable as that option would be for these barbarians, and that we’re only fuelling the fire that will radicalise their children and providing our new generation of soldiers with a new generation of enemies.    Same game, different players.

In America, President Trump campaigned by bashing his predecessors records for not doing enough to de-escalate the conflict that’s been roaring for years, he’s always criticised why we were all ever there. Yet, he is still signing off plenty of more funding for this conflict that he’s been staunchly opposed to. I have to agree with Senator Rand Paul (as I most often always do) that this Victory parade of Trump’s is all well and good, but why not reimburse yourself first, make the Victory parade a Homecoming parade. The war costs the US around $45bn per year according the the Pentagon statistics, why not save all that money and use a chunk of that for the $10-30m parade?

President Trump has increased the numbers of US troops recently.   I’d like to point out I’m not saying this to criticise Trump (only a little), I do believe he is one of the least foreign interventionist Presidents for a long time, I gather that because of his protectionism and all of his tweets over the past years, I think a lot of it is the generals surrounding him who see no other solution in the Middle East than a military one.  But this doesn’t change the fact Trump still agrees to go ahead with this advice.

I believe in the Reagan Policy of peace through strength. It’s okay to have a powerful military, especially when the whole world is in a very tense Mexican stand off right now with North Korea, Iran and Russia.   But we were warned by one of the worlds greatest military leaders 57 years ago of something called the ‘Military Industrial Complex’.    It sounds to me like General Eisenhower’s final address to the nation as President of the Untied States has been very telling.    We are likely being held in perpetual conflict to this day because war is the most effective funding method for the Military Industrial Complex. I must admit this mostly applies to the US circumstance who spend hundreds of billions on defence per year, and the debt racked up in the Middle East so far reaches the trillions. 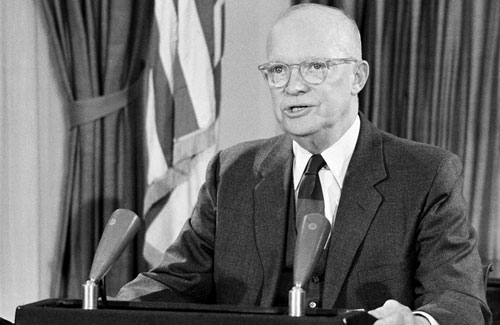 The UK is a different kettle of fish I’m afraid.    We’re cutting our military numbers in a rather dangerous way, there’s lots of talk that we could potentially be losing a large chunk of our Royal Marines, some of our best and fittest fighting men.   It’s a great shame, as the first duty of any Government is to protect the people.

To bring it back to the UK again we’ve also had votes in Parliament in the past couple of years to keep funding our foreign endeavors, not only that, discussions on whether to expand our war and move in to Syria aswell to tackle ISIS.   David Cameron won a House of Commons vote to commit to airstrikes in Syria, two years prior he luckily lost one to put our troops’ boots on the ground in Syria to tackle Assad, accused of Chemical warfare on civilians.    It’s amazing the lengths we go to get ourselves tangled up in more and more wars in these country’s when we haven’t even finished our old ones.  I don’t want to veer off and make this an article about the situation in Salisbury and the poison incident, but I think we’re heading down the same path here as well. Russia’s Armed Forces could quite frankly wipe our Nation off the map if they wanted to, I’m not saying this because I back Corbyn or as many will call me a “Russian hack” or because I’m some sort of appeaser. I’m arguing from a stone cold Devil’s advocate perspective, we still don’t know the full story of who’s done what and anyone claiming they do has let their emotions cloud their reason. History further shows that unfortunately governments take advantage of crisis at every opportunity to manipulate and drive a liberty-confiscating agenda.

I said I wasn’t going to make this about Mr Blair but it’s still how we wound up in Iraq, fearmongering.   Telling us about the dangerous WMDs and the evil Dictator Saddam Hussain, which he was but it didn’t justify our intervention, it hasn’t gone much better since has it.  This is why I take my Politicians’ words with a pinch of salt before I make any judgments as a general rule, not just regarding Tony Blair. Regardless of who the other guy is during tense times, I’m not going to back my leaders who are hypocrites doing the same acts they’re accusing others of doing just because “our Leaders are the goodies and they’re the baddies”.

I think we all know by now we’ve completed our mission in Afghanistan anyway, our coalition hurt Al Qaeda and Bin Laden is gone.   The majority of our mission since has been to arm and train the Aghan Forces to handle their situation themselves.   As far as I’m concerned they’ve had 17 years to do that, plenty of time to get prepared if you ask me.  Not much more to be done for them but let them get on their way.   We can’t be expected to fund evey other country everywhere around the world forever, we’ve got plenty of home struggles to settle first.  Some argue if we don’t help them then the terrorists will expand and come for us next, but truth be told some are already here, attacking Europe’s streets.   The UK had five terror attacks in 2017.  Clearly our 17 year campaign in these countries hasn’t done much to deter these attacks, especially when ISIS have made promises to take full advantage of European freedom of movement policies.  If ISIS were rolling in tanks on their way down our streets I’d agree to mobilise against them of course as a matter of National Security. William Prescott is quoted as saying “Don’t fire until you see the whites of their eyes” during the Revolutionary war and right now we can’t see the eyes of our enemies from 4,500 miles away, even if for some strange reason they did manage to march across Europe unopposed. One of the many benefits of being an Island nation is there is a large stretch of freezing Atlantic water known as the English Channel between us and mainland Europe, and we have a Navy that could set up a glorious blockade across it to greet any attackers.

We also have to remember what these perpetual wars are doing to our troops, they’re the real victims and casualties both physically and mentally. Soldiers come home with some devastating injuries, or worse, don’t make it home.  Not only that, Veterans who deserve looking after are then treated like criminals, legal firms jumping on the opportunity to make a decent amount of money to get these men tried and convicted for ‘War Crimes’ (defending themselves in battle), yet no repercussions for the Politicians who sent them there in the first place.    Institutions like IHAT, who have fortunately been shut down for their mistreatment of our Veterans, causing them unjustified and undue distress.  I’ve applied for the Army and I’m ready, willing and able to serve my country in any capacity that I’m required if asked. But I’m opinionated as well. I’d rather we return to be a peacetime force to focus on defense and the real threats to our Liberties in the current times. Rather than yesterday’s wars.

Adam is a Conservative concerning economic and social issues with a Libertarian streak on civil issues and foreign policy, the latter of which interests him most. From the town of Oldham and currently studying for his LL.B at Manchester Law School with ambitions of achieving a Reserve Commission. Has represented the Daily Globe on RT UK and is open to other inquiries.
Previous Political Tribalism And #Brexit
Next Shouldn’t the rich contribute more?

I met a friend who works for the BBC yesterday.  She was horrified at the …