From the annals of overwrought self-pity comes this piece from Nick Cohen in The Spectator, declaring that thanks to Brexit, Europeans are supposedly the latest designated victim class in Britain.

They have lived, worked and loved here. They never saw their status as a problem until Brexit. Nor did anyone else apart from a few thugs who look for any excuse to racially abuse a target. They knew who they were. And now their certainties have gone.

By this I don’t mean that the British government and the EU are still arguing about their legal status – important though the argument is. Rather that their secure sense of identity has gone.

I am not unsympathetic to the theoretical notion of one’s identity being impinged upon or “ripped away”, as so many Remainers like to claim. And Cohen is quite correct in his piece to point out that the umbrella term “EU immigrant” contains multitudes and diversity, from Romanian fruit-pickers to Romanian or French management consultants and bankers.

I will further concede that some on the Leave side have a tendency to paint all EU immigrants to Britain as city-hopping, rootless “citizens of the world”, members of the highly-educated professional class, when this is by no means always or even usually the case. I have been guilty of this kind of oversimplification in my own writing at times, and it is important to note that an individual or family can simultaneously be EU citizens from another member state and also one of the JAMs (Just About Managing people) invoked by Theresa May.

But what is particularly galling about Cohen’s piece is the total lack of self-awareness yet again shown by Remainers. Yes, an unexpected threatened change to one’s legal residency status can be unnerving and stressful (even though such issues have now been put to bed) but there is no reciprocal regard for the feeling of many Leave voters that their identity had been under increasing assault for the past forty years of Britain’s EU membership. This identity is not to be mistaken for a white ethno-nationalist sense of self, but in the sense of people of all races and ages who hold their British identity significantly more dearly than any European identity, yet have seen government political power and agency increasingly shift from being rooted in a demos to which they feel a part toward a wider European demos with whom they have far less affinity.

In other words, Remainers like Nick Cohen complain because of a sudden reversal of fortunes whereby they no longer call all the shots or get to see their worldview prevail unchallenged, but spent the past recent decades dismissing the concerns of Leave voters who watched their sense of Britishness being undermined against their will and without their positive consent.

Further, it should be pointed out that there is a surefire solution available to many of those who now claim to feel like “aliens in a land they took to be their home”, and that is to apply for citizenship. That’s what people do in practically every other part of the world if they choose to live and work in a country other than their own, and nowhere but within the European Union is it considered an outrageous, retrograde demand. My US citizen wife took the oaths of British citizenship only last month in a very moving ceremony in Camden Town Hall precisely because having lived in this country and grown to love it, she wanted to formalise and make permanent that connection rather than simply renewing her permanent residency ad infinitum or having to apply for it all over again when we return from the United States.

The process of applying for citizenship is bureaucratic, stressful and expensive, not helped by Home Office red tape and administrative incompetence, which should be changed. But barring those rare cases where joint citizenship is not permitted then there is no justifiable impediment from taking this step and formalising one’s connection to the United Kingdom.

As I wrote in January:

Citizenship is more than a basket of rights, privileges and perks. It is also a binding commitment to the society in which we live. Choosing to naturalise means a willingness to undertake obligations as well as demand one’s due. Becoming a citizen is a declaration that one is bound to one’s fellow citizens by something more than temporary convenience or the accidental byproduct of an overseas work assignment or relationship.

This bond is hard to describe or put down in words, which is perhaps why so many self-declared “citizens of the world” – people who consider themselves to have transcended national alignment and who flit from place to place without ever making a binding commitment to anywhere they set foot – don’t understand why it matters.

But if you have built a life in Britain over the course of years or even decades, why would one not want to formalise that connection? Yes it costs money, and yes the Home Office does its damnedest to make the process as bureaucratic, expensive, frustrating and opaque as possible, often actively throwing barriers in the way of people who desperately want citizenship. But if one has the means and the opportunity, why not take the pledge and acquire the passport? Failing to do so is the civic version of cohabiting with a partner but never marrying, one foot always out the door, one eye always casting around for something better.

There is one surefire way to ensure that you are never made to feel like a stranger in the land you call home, and that is to seek and acquire citizenship. The European Union is very much an aberration in that freedom of movement suspended this requirement and removed much of the motivation for taking citizenship in another member state, but this is exactly what people in other parts of the world do every day.

But as I wrote last year when thinking about the degradation of the concept of citizenship in general, we have been indoctrinated to see citizenship as a purely clinical, transactional affair when in reality it is supposed to be so much more:

In Britain, citizenship is increasingly regarded (to the extent that people think of it at all) as a transactional affair, services rendered for taxes paid – or even rendered with no reciprocity at all in the case of the modern welfare state. The argument goes that by the sole virtue of paying taxes or drawing benefits here one deserves a full voice in the country’s affairs, even if one is a non-citizen or is present in the country illegally.

This very transactional approach has frayed the contract or bond between citizen/resident and the state. Of course, people still expect the state to protect them from foreign foes, guard against domestic security threats, provide healthcare, offer a welfare safety net and distribute various domestic and EU services. But even as they make these demands they offer rapidly diminishing loyalty to the state in which they live. People are increasingly insatiable for the benefits while being less and less willing to accept the responsibility.

[..] Today, many people demand the perks without accepting the responsibilities – hence the outrage of and on behalf of EU citizens who have built permanent or semi-permanent lives here yet refuse to see why they should formalise that commitment through the naturalisation process (or at least the acquisition of permanent residency following Brexit). They forget that the European Union is an aberration, that nowhere else in the developed world would countries offer so much while asking for virtually nothing in return.

In a way we should actually be glad to encounter a sustained argument from the Remain side rooted in identity rather than the usual alarmist, short-term economic forecasts and prophecies of doom (or insistence that a reduced rate of forecast economic growth in future years means that we will all be digging through the trash for food tomorrow) – in that sense, I suppose Nick Cohen’s submission to the Oppression Olympics actually counts as a forwards step. But in every other sense, it is just more of the same.

More furious obsession with safeguarding access to perks and benefits, more failure to empathise with or comprehend the other side, more demanding something in exchange for nothing, more Politics of Me Me Me, more trying to win a political argument by referring to one’s supposed oppression rather than with reference to empirical facts and ideas.

Victimhood and oppression are the currency of our age, but Nick Cohen goes way too far with his latest argument, devaluing the idea of discrimination and persecution in just the same way as Social Justice Warrior student activists who take time out from their Ivy League or Oxbridge educations to complain about feeling “unsafe” at some of the most prestigious, well-resourced academic institutions in the world.

Citizenship and residency in another country is a privilege, not a right, and will remain so until the nation state is no longer the primary building block in human civilisation (an inevitability, but by no means an imminent one). The displacement which some EU citizens may feel with regard to their identities, while thoroughly regrettable, is therefore nothing more than normality finally reasserting itself in Britain after a long, unbidden hiatus. 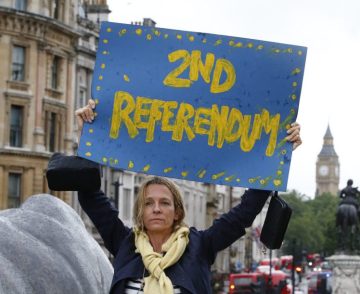 This post was originally published by the author on his personal blog: https://semipartisansam.com/2018/02/13/europeans-the-new-persecuted-minority-in-britain/

Sam Hooper is a former management consultant turned political commentator, currently living in London with his Texan wife. Sam can usually be found somewhere online, droning on about politics, free markets, civil liberties, classical liberalism and classical music. Sam is a proud conservatarian, blogs at http://semipartisansam.com and tweets @SamHooper.
Previous The Prime Minister must stand up for the UK against the anti-Brexit plotters
Next Theresa May’s Mansion House Speech on EU Negotiations