Breaking News
Home / Comment / How can the Tories win the 2024 election? The Conservatives can take some steps now to win the 2024 election.

The most important first step is to demand that BBC News and Current Affairs employs a fairly representative number of journalists from across the political spectrum in the UK.  Perhaps it is a result of operating the World Service but the BBC cannot maintain that it is unbiased when most of its journalists are Internationalists. The imbalance can be corrected by insisting that journalists from the Daily Express, Times, Telegraph etc. are hired as well as those from the Guardian and Independent.

The BBC World Programmes should also be monitored more closely because the message that it sent to the world over the past three years has been one of unrelenting gloom and doom about the UK.  This cannot be the role of such a “service”.

The second most important step is to attend to the rampant bias in employment practices and/or training in the education system.

Inbar et al (2012) studied political bias in Social Science Faculties in the USA. When asked if there was discrimination against conservatives by their colleagues the results were shocking:

44% responded that there was discrimination against hiring conservatives

36.9% said that grants would be withheld from conservatives

34% said that there was discrimination when reviewing papers by conservatives.

Only 4% of these sociologists are conservative so there can be no significant discrimination against the Left.

This study shows a disturbing bias in further education in the USA and there is no reason to suppose that the Humanities/Social Science Faculties here are not as bad or worse.  The voting intentions of teachers show that they are a heavily selected group compared with the rest of society:

It is a mystery why the Conservatives have not subtly removed the sources of this bias, they could do it as subtly as Labour when they introduced it. 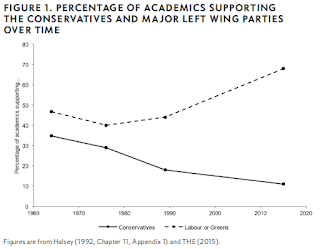 The bias has increased over time and should be stopped now. Units might be established to nurture a more libertarian spirit amongst the Humanities and Social Sciences and funding reduced elsewhere.

Labour has worked long and hard to gain dominance of the BBC and education system,  we can only wonder at the Conservatives failing to correct it.

Lastly the damage to our social fabric is due to those who supported “Remain” believing that they have been somehow robbed of prosperity by ignorant and misled morons.  This story was spun to them by, as John Humphrys confessed, a fanatically Remain BBC and Channel 4.  It is just a story.  The UK has done well compared with other EU economies despite the hiatus of the past three years and there is no reason to suppose that a No Deal or a Free Trade Deal will have a significant impact on the UK economy.  The Conservatives must ensure that the population knows that the Remain predictions for the Referendum were false and those for actually leaving the EU are also false.

This post was originally published by the author on his personal blog: https://pol-check.blogspot.com/2020/01/how-can-tories-win-2025-election.html

Dr John Sydenham has worked in International Pharmaceuticals and for one of the "big four" International Consultancies. He ran a successful company for 15 years and after selling the company devotes his time to travel, science, black labradors and freedom.
Previous Crime – A Conservative Direction
Next Setting sail in an SNP sieve