Breaking News
Home / Comment / It is time for Boris

It is time for Boris Originally, I supported Esther McVey for the leadership of the Conservative Party, and I still do believe that she is the best candidate. There is one issue – she is not gaining traction among MPs, and is still languishing with six supporters. This means I need to pick a different candidate – who can win.

I have decided who I am backing. This person has the support of Jacob Rees-Mogg, whom I have much admiration for, Liz Truss, who should be Chancellor of the Exchequer in the next Government, and Steve Baker and Priti Patel, the two ‘Spartans’ who stood firm on the Withdrawal Agreement. This person is Boris Johnson.

We need a leader who can deliver Brexit, prevent a neo-Marxist taking office in Number 10, and to bring our country together after the divisions of the referendum. We also need a leader who took a principled stand against the ‘Chequers’ agreement, which he surely did. We need to be optimistic about how well Britain can do, we need to aspire to be greater, we need to champion low taxes and free enterprise, and we need a leader who can connect to those who put their faith in Jeremy Corbyn two years ago.

I attended Boris’ speech at Conservative Conference after his resignation from the Foreign Office and it was barmstorming. I truly believe that he has the character, the passion, and the drive that we need to leave the European Union on October 31st. I would also urge Boris to bring back the legend, Dominic Raab, to the Cabinet. I truly like his domestic, Thatcherite agenda and he could bring some expert talent to the table.

This is a critical moment in our political history. We must leave the European Union on October 31st, with No Deal or a FTA. The latter is becoming very unlikely so we must exit on World Trade Organisation terms to restore faith in our democratic process. Boris Johnson has a huge platform, and can deliver on what I have just outlined. He has broad appeal, and has electoral successes behind him. I never thought I would say this but I urge you to back Boris Johnson to be the next leader of the Conservative Party, and Prime Minister. 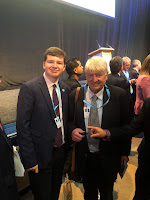 Thomas Moss is pursuing a degree in Law at the University of Chester and is on his local Conservative Party’s Executive Council. Born in Liverpool, he has ambitions to enter the Bar. He supports economic liberalism and social conversatism, similar to that of Mrs Thatcher.
@@realThomasMoss2
Previous The Reality of the EU
Next IMF and Treasury Predicted WTO Brexit will be Fine!