With this intervention by Gordon Brown, the Remain campaign scrapes rock bottom

The worst thing you’ll see all day: Gordon Brown sullying the grounds of the beautiful Coventry Cathedral (my favourite modern cathedral – I used to attend choral evensong while studying at nearby Warwick University) with his latest tawdry intervention in the EU referendum campaign.

Sebastian Mallaby, a Washington Post opinions contributor (and not coincidentally in this case a paid up Remainer) thinks that this is just brilliant:

A few days ago, former Labour prime minister Gordon Brown offered a glimpse of what Britain can be. He paced the ruins of Coventry Cathedral, a medieval gem destroyed by Hitler’s bombs, and praised “a Europe where the only battle is the battle of ideas; a Europe where we fight with arguments and not with armaments.” Staring into the camera, Brown appealed to his countrymen to lead, not leave. “What message would we send to the rest of the world if we, the British people, the most internationally minded of all, were to walk away from our nearest neighbors?”

The best news from this desultory referendum campaign is that Brown’s video has gone viral. (Watch it here).

In the video, which I watched while literally shaking with rage, Brown roams around the beautiful ruins, heaping praise on the European Union for ushering in “a Europe where decisions are made by dialogue, discussion and debate”.

But those decisions are not made democratically, are they, Mr. Brown? At least not by any serious definition of the word. Or is the mere existence of the European Parliament supposed to make up for the fact that the only EU institution with even a tenuous claim to the word “democracy” can neither propose new legislation or strike down the bad, and represents an utterly non-existent European demos (hence the abysmally turnout in European elections)?

Until now, I thought the succession of intellectually tepid interventions by the misguided pro-EU bishops were the worst thing to be done to (and by) the Church during this EU referendum. But Gordon Brown has gone and outdone himself, making the hand-wringing apologetics of John Sentamu and Rowan Williams seem positively devout.

Standing in the ruins of the old Coventry Cathedral, and in the shadow of the new – a magnificent and unique British contribution to architecture, conceived and built to the glory of God long before we joined the European Economic Community – Gordon Brown propagated the Remain campaign’s fatuous assertion that the EU single-handedly kept the peace in Europe and is still needed today for this purpose.

Back on planet Earth, anybody with a brain, a television and an internet connection can see for themselves that the European Union is doing far more to foster resentment and discord between the European countries than sowing peace. Whether it is the promise of young lives being permanently snuffed out or curtailed by 50% youth unemployment or the utter ruin of a small country which ought never to have been allowed to join the calamitous euro experiment in the first place, the last thing the EU is doing is promoting peace, cooperation, tolerance or understanding. I’ve been to Athens. I have seen the anti-German graffiti on every street corner.

Exactly how bad would it have to get for Gordon Brown and his allies in the Remain campaign to feel a twinge of shame or doubt about using Coventry Cathedral, an international emblem of peace and reconciliation, to drum up support for a European Union which has drifted far from the lofty goals of its own mythology, and which only now manages to function at all to the extent that it suppresses democracy and the popular will of the various member states?

I happened to be in Coventry Cathedral on April 21st this year, the Queen’s birthday. And after choral evensong was over, as a tribute the organist played “Orb and Sceptre”, William Walton’s coronation march written for the Queen’s coronation in 1955. In the music echoed centuries of history and independence which Gordon Brown and many in the Remain campaign are apparently willing to cast aside gladly and without a second thought, enthralled instead by a creaking and dysfunctional supranational political union, a mid-century relic which will almost certainly not live to see its hundredth birthday.

But as magnificent as the organ sounded that day, and speaking from a purely personal perspective, it will take a long time to stop the echo of Gordon Brown’s nauseating hymn of praise to the European Union from reverberating around that beautiful cathedral. 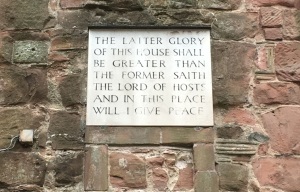 This post was originally published by the author 10 June 2016 https://semipartisansam.com/2016/06/10/gordon-brown-sent-to-coventry-eu-referendum-remain-european-union-peace/

Sam Hooper is a former management consultant turned political commentator, currently living in London with his Texan wife. Sam can usually be found somewhere online, droning on about politics, free markets, civil liberties, classical liberalism and classical music. Sam is a proud conservatarian, blogs at http://semipartisansam.com and tweets @SamHooper.
Previous A challenge to “call me Dave”
Next An Overview of the EU