Leave supporters celebrate opposite the Houses of Parliament in London after voters in the referendum backed the campaign for the UK to leave the EU.. Picture date: Friday June 24, 2016. Photo credit should read: Anthony Devlin/PA Wire

What shall we call them? 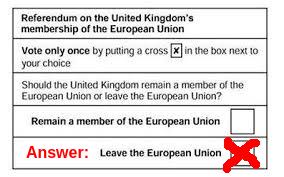 Today brings us the most wonderful news for 50 years as the British people  voted to leave the European Union.  The headline figure for the vote was 51.9% Leave versus 48.1% Remain, a 3.8% margin in favour of leaving.

The reaction of pundits from the three main political parties to the result was shocking.  Instead of realising that the British were saying that their representatives should represent them, many pundits and politicians were scoring party political points and talking about how they might continue importing foreign labour despite the Leave result.  It is this failure of the political class to represent the people who elect them that is at the heart of the referendum result.  When an MP is elected for Sunderland he or she should represent the interests of the electors of Sunderland.

The British political classes have lost their way, they focus on Syria, international migration and political ideology instead of being one with their people. It was saddening to see Remain politicians saying that they should “listen more” to the voters.  How patronising! It is not about listening, these politicians should be of their own people, knowing their own area and country, knowing it as one of them, not as a messenger or patroniser.  British government and politics has become colonised by a bunch of ideologues who don’t give a damn about anything but their own petty ideologies. This failure is obvious to much of the population but not to the politicians.

The margin of victory in the referendum appears small but the population has been subjected to a continuous barrage in favour of Remain from the UK government, all the main parties in Parliament, the EU, the USA and by all of the USA and EU backed bodies such as the IMF, OECD, WTO etc. In the absence of such an attack the real margin in a fair referendum would have been higher, perhaps much higher.  The government had also been secreting pro-EU supporters into many major public positions over the past two years and had clearly done a deal with the BBC to guarantee slanted coverage. So, well done People of Britain, you have slain the giants against all the odds!

The margin in England was quite large with a 6.8% advantage to Leave (53.4% for Leave and 46.6% for Remain). In Wales there was a 5% advantage for Leave and in Northern Ireland and Scotland a Remain majority. Scotland was resoundingly Remain with a 24% margin. Even with a fair referendum in which both sides had been equally represented in the media and political parties and outside influences such as President Obama banned, the Scots would still have voted Remain.

The population of Britain has voted Leave and there will now be a period of adjustment and negotiation.

The fall in the pound is exactly what the UK economy needed, it will make EU and other imports less competitive and increase the competitiveness of the UK economy. We can only hope that 5% or so of fall in value persists for a while.

Contrary to the partisan “experts”, the UK government has, over the past 20 years, neglected the terms of trade and finance between the UK and EU.  It would never have allowed a combined, annual trade and financial deficit of over £100 billion to occur with any other trading partner than the EU (and did not allow it).  It is time to rebalance the UK economy.  Leaving the EU gives the UK the chance to reduce the rate at which profits made by EU investors can leave the UK and to reduce the huge import of manufactures from the EU that causes a trade deficit of over £60bn per annum.  I would strongly counsel against rushing into any Free Trade Agreement with the EU and instead the UK should negotiate phased tariff reductions that correct the trade imbalance without affecting trade volume excessively.  The UK should, of course, join EFTA as soon as possible (but not the EEA with its commitment to membership fees and free movement of labour).

The Referendum has also told us a great deal about Britain. The voting patterns in the referendum have shown that Britain is divided and bent.

Most strikingly, although the majority of the population was for Leave, and in England a substantial majority, there seemed to be few journalists in the BBC who were sympathetic to Remain and the main Parties were all Remain.  Something stinks at the BBC and in the Parties. There should be an enquiry into BBC political bias that asks the question of journalists: “Do you think Britain should have Remained in the EU?”.  According to the Referendum at least 50% should answer NO if there is no bias in staff selection.

This Referendum was particularly shocking because many young people seemed to think that global government is holy and the inevitable fate of humanity.  This idea was commonplace despite the fact that every James Bond and Superhero film portrays any attempt at conquering the world as the ultimate psychopathy!  It is obvious that given long enough, any involuntary or voluntary global government will fall into the hands of the corrupt or ideologically insane and, in the absence of any outside help, the globe would sink into centuries of oppression.  It is the diversity of Nation States that maintains the light of freedom by providing an outside example to the people of any regime that slides into oppression.  Many young people genuinely believe in global government and imagine that utopia would be achieved by abolishing any opinions that they despise or dislike.  Worse still many fully believed that such an intolerant outlook was holy.   The young have been taught to put Union and abolishing the differences between Peoples ahead of Respect, Independence, diversity and even freedom.

The young have been subjected to a curriculum in school that favoured Internationalism, portraying decent Nationalism as xenophobia and racism, whilst ignoring the fact that the EU will just become a large Nation, and seemed unaware that supporting it is a transfer of allegiance, not something holy.  The last Labour government was largely responsible for this political bias in the education system and the EU allocated funds and course materials to insinuate its propaganda into schools. It should be a priority for any future government to remove Internationalist and pro-EU propaganda from education.  Future governments should take serious measures to remove all political messages from the curriculum, including slanted coverage of history, geography and economics.

The majority for Remain in migrant areas shows that the education system has neglected to tell people about the British Constitution and European History.  It was very obvious that many people had no idea that the EU was not just a larger, more left wing, version of the UK.  They were unaware of even the most basic differences and history such as the difference between Common Law and the Code Napoleon or the nature of the Habsburg and Holy Roman Empires.

There will be many calls for us all to unite after this referendum.  I agree but we should unite as British people and not consider unity as offering space for Internationalists to continue ignoring the needs of their own constituencies and people.

Dr John Sydenham has worked in International Pharmaceuticals and for one of the "big four" International Consultancies. He ran a successful company for 15 years and after selling the company devotes his time to travel, science, black labradors and freedom.
Previous Why I am Voting Leave
Next Great Britain delivers

The Great Indy and Ref Swindle

If I go around knocking on doors collecting for a local cancer charity, but it …