A united voted for a United Kingdom

This image first appeared in the Daily Mail

Once more there is a General Election. I’m rather tired of elections, but it could have been worse. I could be writing once more there is going to a Scottish independence referendum. A few weeks ago indyref2 appeared to be getting closer by the minute. Then it got kicked into the long grass by Theresa May telling Nicola Sturgeon that she would have to wait. Now the whole thing may depend once more on the outcome of the General Election. It’s time to think clearly.

There are only two people who can become Prime Minister. Either we keep Theresa May or gain Jeremy Corbyn. We know from past experience that opinion polls and betting odds are a poor indicator of the future. They are about as accurate as weather forecasts and just as likely to give you a surprise. For this reason it’s necessary to accept that Labour could win the General Election. What would happen if they did?

Given the present political makeup of the UK, it is basically impossible for Labour to win an overall majority. They have one seat in Scotland. This means that for Labour to govern they would require the support of other parties. This might or might not be a coalition. It doesn’t matter. Relying on the votes of other parties informally is still relying on them. If Labour had to depend on the votes of other parties it would have to make concessions to them whether there were a formal coalition or not. Which other parties would Labour depend on? Whose votes and MPs would Labour need to form even a minority government? Well obviously this would depend on the result. However it is worth noting that the Lib Dems have nine seats while the SNP won fifty six seats in Scotland in 2015. Realistically this means that in order for Labour to rule they will require the support of the SNP. This was the case during the last election campaign in 2015 when the SNP had only six seats. It is still more the case now. Simple arithmetic tells us that Labour cannot win on its own. 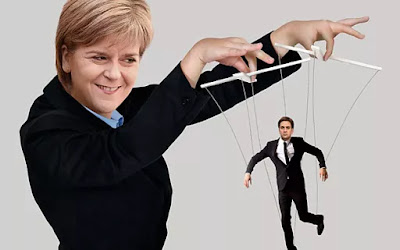 A Labour victory might not mean a coalition with the SNP. Whatever the parties say now, we would only find out if there were to be a “Progressive coalition” involving the Labour, Greens, SNP and Lib Dems when the General Election is finished. But whatever arrangement came about whether it was called a coalition or not, it would require some sort of deal. What do you suppose the SNP price would be? What does Nicola Sturgeon want most in the world? I cannot imagine Jeremy Corbyn being as firm with her as Theresa May has just been. This is not least because Corbyn has recently said he was “absolutely fine” with indyref2. This is a man who apparently has such a loathing of Britain that he consistently sides with our enemies. He would be delighted if Northern Ireland left the UK. Perhaps he would be equally delighted if Scotland left too. But even if he were the firmest of leaders, if his party depended on SNP votes to rule, what choice would he have but to agree to Sturgeon’s demands? This is the logic which saw Ed Miliband depicted as a puppet on the end of SNP strings. It applies still more so today.

If you want to keep indyref2 in the long grass, therefore you had better hope that Theresa May remains Prime Minister. It is likely that this hope will be fulfilled. I cannot imagine a time when the British public elect a far left Trotskyite IRA/Hamas sympathiser to lead them. Labour Party MPs themselves have frequently tried to get rid of him. They have in huge numbers expressed that they have no confidence in Mr Corbyn? Now these same MPs are trying to persuade us that the British public should nevertheless have confidence in him leading our country. This strikes me as just a tiny bit hypocritical.

Labour MPs may eventually get their wish. If Labour loses badly, even if Labour loses at all, surely Corbyn would go then. Or would he? No doubt the majority of Labour Party members would still vote for him to lead their party. I sometimes think the problem with Labour is not so much its MPs, many of whom are quite sensible, but its supporters, most of whom are not. It is simply not sensible to elect Jeremy Corbyn as your leader, not once, but twice.

The British public do not want socialism. We never have. When Labour has been moderate it has periodically been elected. Until Labour Party members come to accept that socialism is the problem rather than the solution, they will find themselves outside the mainstream pushing towards the edge of the extreme. By ditching socialism and becoming a social democratic party Labour may deserve another chance. But until that happens voting for the far left is as irresponsible as voting for the far right and morally as dubious.

Even if Theresa May remains Prime Minister, even if she increases her majority this may not be enough to keep indyref2 in the long grass. This will depend partly on how the campaign goes and the main issues that arise. Obviously Brexit is still a main UK wide issue. Theresa May is looking for a mandate for her approach to leaving the EU. Perhaps this will also be an issue also in Scotland, but whatever people’s various views on the EU, there is still only one issue that dominates Scottish politics and it is not Brexit.

Until recently momentum was building towards indyref2. It was unstoppable. Then it stopped. Theresa May said “No, not yet, you are going to have to wait”.  Finally someone was firm with Scottish nationalism. A Prime Minister said “No” and Sturgeon found herself impotent. That’s where we are now. Theresa May can theoretically maintain this position for years.

The SNP have no right to an independence referendum whenever they want. The right to self-determination in international law is balanced by the right of nation states to maintain their territorial integrity. No-one thinks that the USA must allow its various parts to leave by means of a vote. Nor indeed does international law require any Western democracy to grant a constituent part a vote on independence. There is hardly a single one that would. The reason is that the international law regarding self-determination was developed in the context of decolonization and simply does not apply to long-standing democratic nation states.

SNP supporters who continually go on about self determination likewise appear unaware  the fact that Scotland by a large majority decided to stay in the UK was in itself an act of self-determination. We did determine, because we did choose. Most commonly such historical choices are seen as once and for all. To continually re-run such votes would lead to international instability.

However, although it would be possible and certainly legal for the UK Government to decide that the UK was constitutionally indivisible and that therefore there would never be indyref2, it is unclear that this is politically acceptable and fitting in with our traditions. Given enough support for the SNP over a sustained enough period, it is unlikely that a UK Prime Minister would continue to block indyref2 indefinitely. “This isn’t Spain, you know”. We govern with consent.

Scottish voters can either help Theresa May maintain her “not yet” stance or we can hinder her. It has never been more vital for Pro UK people to show Theresa May that we support her response to Nicola Sturgeon’s indyref2 demands.

But doesn’t voting for any Pro UK party show that we support Theresa May’s stance. No obviously not. Voting for Labour or the Lib Dems is a vote to kick Theresa May from office. This is not usually described as support. Quite the reverse.

Voting for Labour or the Lib Dems in Scotland is not going to help the situation. Neither of these parties can rule on their own. Each would require the votes of the SNP. Remember when Labour had nearly all the seats in Scotland. The SNP still used this fact to justify independence on the grounds that England voted Tory, while Scotland voted Labour. Both the Lib Dems and Labour favour giving still more powers to the Scottish Parliament while loosening still further the bonds that hold the UK together and calling the result federalism. Both the Lib Dems and Labour are responsible for starting the whole mess that is now called Scottish politics by demanding that we have a Scottish Parliament in the first place. It was Labour who first played the nationalist card by saying that Conservative rule was illegitimate in Scotland because we didn’t vote Conservative. This card then destroyed them.

In this election I don’t believe in tactical voting. It amounts to propping up the declining Labour and Lib Dem vote when polling suggests that Conservative candidates have the best chance of defeating the SNP all over Scotland. Voting for the the Lib Dems or Labour hinders the key Pro UK goal of creating a united opposition that could go on in time to defeat the SNP. Moreover, every single Labour or Lib Dem MP is potentially part of a loose “progressive” coalition containing the SNP. The price of this so called progress would be indyref2. If a Conservative votes tactically for a Labour or a Lib Dem MP, it could be this MP’s vote that gives the Lib/Lab/SNP pact the majority needed to topple Theresa May and Sturgeon the leverage she needs to demand indyref2.

Obviously I would prefer any Pro UK MP to be elected rather than a Scottish nationalist, but I don’t intend to spend the whole election attacking only the SNP. This negativity hurts the Pro UK cause. I will campaign positively for what I believe and vote for the party that I prefer. I suggest that you do likewise.

But remember if all Pro UK voters united behind the Conservatives we would surpass the SNP and there would be no danger of our facing a divisive and damaging second independence referendum. It’s time to stop voting tribally. It’s time to vote for the party that has the best chance of standing up to Scottish nationalism.

Huge numbers of Pro UK Scots were delighted when Theresa May stood up to Nicola Sturgeon, but many if not most will still say, I couldn’t vote for a Tory. Scottish politics is distorted. The vast majority of Scots vote for left of centre parties. It is this that justifies the SNP’s claim that England votes for the Right while we vote for the Left. Only when there is a Left/Right balance in Scottish politics will we once more be safe from Scottish independence. We can bring that day nearer in only one way and that is by voting for the Conservatives. A vote for any other party helps the SNP.

This post was originally published by the author on her personal blog: http://effiedeans.blogspot.com/2017/04/a-united-voted-for-united-kingdom.html

Effie Deans is a pro UK blogger who works at the University of Aberdeen. She spent many years living in Russia and the Soviet Union, but came home to Scotland so as to enjoy living in a multi-party democracy! When not occupied with Scottish politics she writes fiction and thinks about theology, philosophy and Russian literature.
Previous Happy #edballsday, Angus Robertson
Next Labour And The Left Simply Do Not ‘Get’ Patriotism, And Their Patron Saints Holiday Proposal Proves It