Adults Migrants Posing As Children Make A Mockery Of British Asylum, But Pointing This Out “Offends” The Left

Leftists do not scream “that’s offensive!” out of overwhelming, saintly concern for the supposed “victims” of free speech. They do so as part of an authoritarian ploy to shut down unwanted discussion and mockery of their own sacred values

One does not need to see the dental records of some of the people currently being brought to the UK from the soon-to-be-demolished Jungle refugee camp in Calais to know that a number of those migrants (for who can say whether most are genuine refugees?) are not, as they claim to be, under the age of eighteen.

In fact, one barely needed a functioning brain to correctly predict that a number of enterprising military-age males might seek to game the system, claiming to be both children and refugees when one or both assertions are entirely false (current figures show that two thirds of “child” refugees challenged by Home Office officials turned out to be adults).

I confess I was rather looking forward to the arrival of the alleged ‘children’ from the Calais migrant camp.

Leftists have an oily habit of stretching the definition of this emotional word. It helps them make the exaggerated claims of suffering, by which they so often achieve their political aims.

I fully expected to see square-jawed, muscled, hairy young men of military age, and I have greatly enjoyed the embarrassment of the soppy idiots who spread and believed the propaganda about them.

Of course it’s possible that they are all really 12, and have been terribly hardened by war and suffering. But if that is so, how come they are in a crime-ridden camp in France, which exists purely to besiege our borders and launch illegal attempts to cross them?

Nobody ever asks how the inhabitants of this camp got there, because the answer in almost all cases is that they were trafficked there by well-paid crooks. What responsible parent would put an actual child in the hands of such people, notorious worldwide for their ruthlessness?

And why are we supposed to be so tear-stained that these people are stuck in France? France, the last time I looked, was one of the most civilised countries in the world. It is not a war zone. Nobody starves there. There are schools. Many fashionable British liberals own houses there. The quality of the coffee has gone down a bit in recent years, but that is no reason to stow away in a lorry or climb a 15ft fence so you can move to Tottenham or Slough.

And with so many transparently post-adolescent people being dutifully shipped across the English Channel and ushered into Britain by a credulous Home Office, it does not fall beyond the bounds of reasonable political humour to joke about the way in which British immigration and asylum rules are being so nakedly and egregiously flouted (the photo captions in this Daily Mail piece are some of the best political comedy this month).

Unless, that is, you are a thin-skinned Labour MP whose metro-leftist ideology demands that anybody and everybody who demands admittance to Britain is immediately and unquestioningly allowed in. For in such cases, joking about octogenarian “children” being rescued from the perils of France is not mere political banter – it is inherently racist for a start, and worse, it is highly offensive and triggering to those leftist MPs whose ideology and motivations are being mocked.

A Labour shadow minister has been left upset after someone stuck up a “highly offensive” child refugees joke in her shared kitchen in Westminster.

Chi Onwurah shared the A4 sheet on Twitter after it was found this morning in the room she shares with Labour, Tory and SNP MPs.

The message mocked refugees after pundits and Tory MPs questioned the age of arrivals in Britain who said they were under 18.

It showed an old man with the message: “Just £3 from you could clothe and feed this 12-year-old Syrian child for a week”.

Who, exactly, does Chi Onwurah think is offended by this poster? Genuine child refugees from Syria? None of them have visited the House of Commons kitchen, or had an opportunity to see the offending poster. Genuine child refugees will have far more pressing cares and concerns on their innocent minds than a poster which mocks people who are clearly above the threshold of adulthood but trying to pass themselves off as children.

No, the only people “offended” by this poster are the virtue-signalling, bleeding heart lefties who are currently puffing themselves up with over-conspicuous compassion for people who already enjoy the shelter and protection of a safe and very pleasant country (France) because their metro-leftist ideology calls them to undermine the nation state at every turn and defy national borders wherever they exist.

And as even the MP herself emphasises to us, the main takeaway from this event is that Chi Onwurah, not any refugee or person directly connected to the migrant crisis, was left “upset” by the incident: 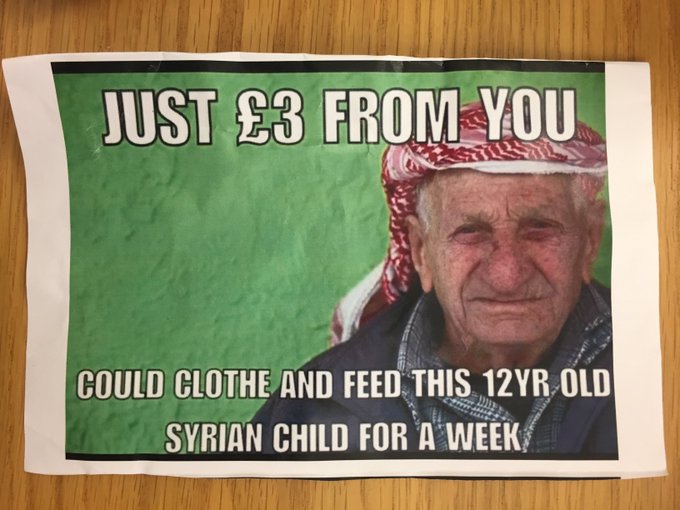 Upset someone in Parliament thought it funny to display this in the communal kitchen over the weekend. #refugeeswelcome

In other words, Onwurah – who, as an MP, is an immensely privileged and powerful member of society – was left distressed because somebody challenged and mocked her worldview in the form of a poster. That’s what we are invited to feel upset about, really. Not the genuine child refugees themselves. Screw the child refugees. Screw the adult refugees posing as children, for that matter. No, what really matters here is that a virtue-signalling Compassion Olympian like Chi Onwurah encountered some unexpected pushback against her leftist worldview, and promptly fell to pieces as a consequence.

This is – oh, how best to put it? – completely and utterly pathetic. This blog has sympathy for anybody desperate enough to traverse the continent of Europe and then rot in an improvised camp in Calais just to try to reach our shores. That sympathy does not extend to wanting to throw open our borders to anyone who seeks to abuse the asylum process to have their pick of safe European destinations – that’s not what asylum is for or how the system is supposed to work, and the nation state ceases to mean anything if everyone who fancies a life in Britain can claim one – but there is great sympathy nonetheless. And I back that concern and sympathy with action where I can, with charitable donations to appropriate organisations seeking to provide relief to genuine refugees.

But this blog has absolutely no sympathy for Chi Onwurah. I hope that with time and extensive therapy, the MP for Newcastle Central will manage to recover from the immense personal trauma of encountering a poster which contradicted and mocked her own personal worldview. It is truly a calamity of monstrous proportions, verging on torture, for a leftist MP to accidentally behold a poster which scorns her own personal belief that every last migrant seeking to gain entry to Britain is a legitimate refugee from the Syrian conflict, or that everyone who claims to be a child is actually under the age of eighteen. We may as well be honest – the person who put up this poster in the House of Commons tea room effectively mentally waterboarded poor Ms. Onwurah. There is simply no other way to put it.

And yet call me crazy, but this blog would sooner feel sympathy for those genuine refugees who have undergone untold sufferings on their voyage to Europe than for an MP who (shock, horror) experienced indirect mockery in the House of Commons – an unheard of and unprecedented indignity, I’m sure.

But this is how the modern Left operates. They have weaponised victimhood and offence-taking to such an extent that the target of any supposedly “offensive” speech no longer even has to be the victim group currently being exploited for political gain. Now, it is an equal crime to “offend” the leftist advocates of that victim group. Insulting Chi Onwurah is like insulting a vulnerable child refugee herself, according to this ridiculous mindset. To offend against a leftist white knight is to offend against their beneficiary.

Directing her comments at whoever posted the image she said: “It’s a communal area, not everybody shares your sense of humour.

“There are many things I get angry about but I’m not going to force that on my work colleagues.

“I don’t think it’s funny. Not when you see what people have been through coming from Syria.

“People often share jokes but this is a communal area and I and others shouldn’t have to suffer what you think is funny.”

Ms Onwurah said her researcher took the poster down, and she was unlikely to make a formal complaint if it broke the rules because she had already highlighted it by making it public.

Again, we are invited to feel sympathy for and rend our garments in solidarity with Chi Onwurah, who has seen refugees from a distance, rather than with the refugees themselves. It is her trauma we are supposed to care about, not that of the migrants and refugees in Calais. The self-involvement of Onwurah’s complaint would be hilarious, were it not quite so sickening.

From her fainting couch, Onwurah writes that she should not have to “suffer” the sense of humour of the person who erected the poster, despite also conceding that other “people often share jokes”, seemingly without arousing her ire. In other words, Onwurah effectively sets the bar for offence within the Palace of Westminster at the low level of her own easily-triggered sensitivities.

And yet Onwurah actually believes she is being magnanimous by not reporting the incident to the House of Commons authorities (who presumably have an HR policy ready to go, just waiting for the moment when a Labour MP was triggered by a satirical poster). Onwurah clearly believes that it is perfectly within her legal and moral rights to summon the authorities and have them crash down like a ton of bricks on the head of the perpetrator – and that she is showing mercy to the perpetrator by not doing so.

Ultimately, Chi Onwurah’s complaint asks the British people to be more concerned that a home-made poster violated the safe space for leftist groupthink that is the House of Commons communal areas than we are about the plight of genuine child refugees stranded in Calais.

Leftists like Onwurah are aghast that a harmless poster mocked and contradicted their worldview, and have no compunction about assuming the same language of frailty and victimhood as the people they so ostentatiously affect to help, even though we can say with cast iron certainty that No Refugee Was Harmed In The Making Of This Poster.

And that really tells you everything you need to know about the self-involvement, decadence and moral bankruptcy of the modern Left.

This post was originally published by the author 24 October 2016:  https://semipartisansam.com/2016/10/24/adults-migrants-posing-as-child-refugees-syria-mockery-british-asylum-leftists-offended/