NHS figures show that almost a quarter of 17 to 19 year old girls in the UK suffer from emotional disorders such as anxiety and depression.

These disorders are thought to be more the result of environmental influences rather than genetics. 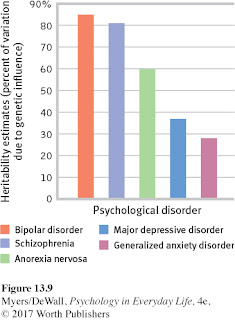 The frequency of emotional mental illness in the young is rising.  The NHS graph below does not include the 17-19 age group and does not separate males and females but shows that emotional disorders are rising: 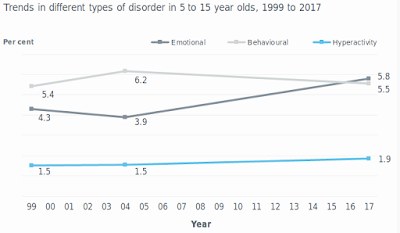 If the 5-15 year old girls are separated using the raw data there is a 62% increase over the past 18 years: 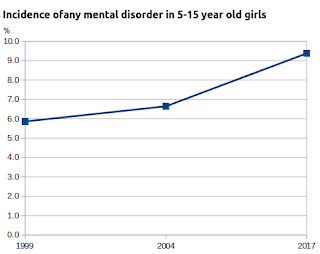 The effect would probably be greater if data were available for 17-19 year olds.

The major cause of this illness is well known and it is getting worse:

The cause of this terrible unhappiness and distress is largely social media.  The NHS data showed that the poor were more likely to be affected and suggested that the mental illness made sufferers more likely to turn to alcohol, smoking and drug use.

It is interesting that we will shut down our entire economy for a disease such as COVID19 but not lift a finger to help our children.  The big tech companies are literally driving our children mad but nothing is done.  It is sadly the case that for every research paper that identifies the problem the big tech companies will support (indirectly) a study or review to obfuscate the problem.  This is all reminiscent of what happened when smoking was being identified as the source of lung cancer or the adverse effects of the broadcast media were identified.

There is evidence that the epidemic of emotional mental illness is affecting young women in general as is shown in this graph of prevalence of experiencing any common mental health disorder (CMD) in the past week, by age, males and females, England, 2014:

The media claim that everything will be all right with the world so long as we get our ID politics “correct” is not supported by the NHS data, it being unclear whether the rise in sexual awareness due to media exposure would exacerbate or cure the problem of emotional mental illness:

This post was originally published by the author on his personal blog: https://pol-check.blogspot.com/2020/09/are-social-changes-damaging-childrens.html

Dr John Sydenham has worked in International Pharmaceuticals and for one of the "big four" International Consultancies. He ran a successful company for 15 years and after selling the company devotes his time to travel, science, black labradors and freedom.
Previous EU law is bunk
Next Ireland and the EU are damaging the Peace Process