Coverage in the media of the fact that the Belfast Agreement does NOT specify open borders with frictionless trade in Ireland has been entirely suppressed (read the Belfast Agreement here if you don’t know this) and the news that the Bank of England has calculated that a WTO Brexit with a 21 month transition period will have little effect on our wealth has also been suppressed. This article aims to shed light on the Bank of England predictions for a managed WTO Brexit.

The Bank of England’s report: EU withdrawal scenarios and monetary and financial stability contributed to Hammond’s predictions for Brexit but not in the way he must have hoped.  They actually showed that a managed WTO Brexit would have little effect on our wealth.

Even the Bank of England did not really believe the “worst case” scenario, the one that got all the headlines, would happen. Its realistic scenario for a near to “no-deal ” Brexit involves a transition period of 21 months in which the basic requirements for UK EU trade such as mutual recognition are sorted out.  Even though it is clear the Bank was trying to make a case for avoiding a WTO Brexit the outcome of this straightforward scenario is acceptable to anyone who believes in self government for the UK.  The Bank of England Graphic for WTO Brexit with a 21 month transition looks awful at first sight: 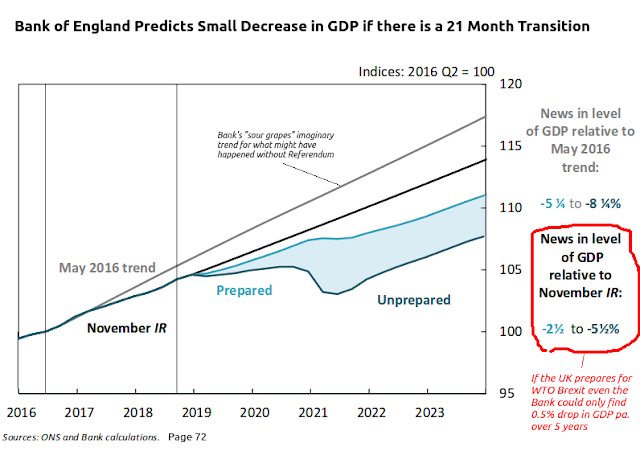 However, it corresponds to only 2.5% fall in GDP over 5 years compared with the Bank’s calculated GDP rise if we remained in the EU.  That is only 0.5% per year.  Much of the predicted “fall” in GDP is actually due to 0.33% lower population growth – fewer people mean a lower GDP but don’t mean you and I get poorer. (See Note 1 below for the population figures).

What the Bank is saying is that we would all earn a similar amount per head after a WTO Brexit but there would be fewer of us so overall GDP does not grow.  It was actually rather malevolent of the Bank to fail to point out that we -you and I – would not be appreciably poorer with a managed WTO Brexit.

Sensible governments will publish GDP per head figures rather than GDP figures after Brexit so that people do not get confused by lowered population growth.

If we use the Bank of England figures for a fall in GDP of about 0.5% per annum plus a lowered rise in population by 0.3-0.4% per annum due to lower migration (see Population Growth) we get the following graph of GDP per head of population: 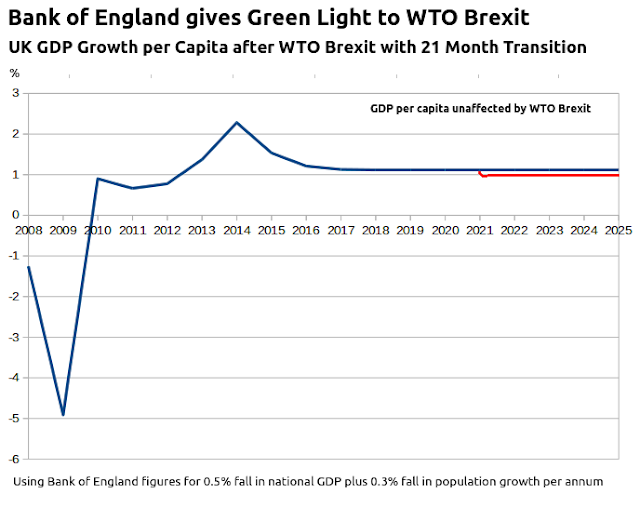 In truth 0 to 0.2% falls in national statistics cannot be predicted with any certainty so a WTO Brexit will be fine.  All those who support Brexit should cheer the Bank of England for showing in black and white that a managed WTO Brexit should involve no fear for us.

Notice that the “sour grapes” effect of the referendum, the “May 2016 trend” that the Bank uses to exaggerate the “ill-effects” of the Referendum, does not occur when we consider GDP per head, it is an artefact of slightly lowered migration into the UK, as can be seen from the decline in migrant workers from the EU in 2017 below. 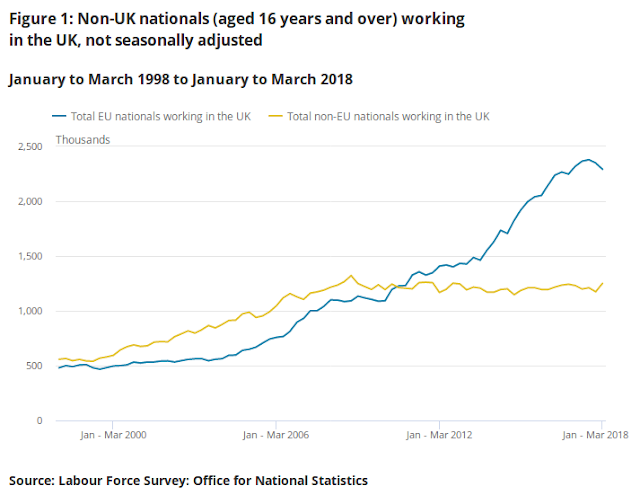 We should all start to get angry with the Bank of England and the European Movement (the leaders of Remain), they are literally treating journalists like ignorant fools who will just publish any propaganda they generate.  Everyone knows that increasing GDP by increasing the population is a bad idea on this overcrowded island and doesn’t benefit us.  It is higher GDP per head that we need.

Hammond to Carney: how do we double our GDP?  Carney to Hammond: double the population. You and me: but that doesn’t make me any richer. Carney and Hammond: we don’t care so long as it fools you.

It is deeply worrying that our media are not giving any publicity to the fact that the Belfast Agreement does not specify frictionless trade in Ireland and has not informed us that this is a new concession to the Republic of Ireland.  It is also disturbing that economics editors have simply refused to mention that much of the “ill effects” of a managed WTO Brexit will not make us poorer and are hugely beneficial for all of us because they will ease population pressure.

Here is a list of the most disastrous events anyone in the Bank could imagine for a no-deal Brexit:

Tariffs are introduced suddenly in Q2 2019 (no transition at all), EU does not recognise any UK standards but UK recognises EU standards, no trade deals are signed for 5 years, there is maximum disruption to derivative markets, UK loses all existing trade agreements negotiated by EU, UK has no infrastructure to deal with border crossing, “fire sales” of commercial assets occur, bond yields are increased substantially, migration falls to 100,000 people leaving the UK pa.

It is, of course, possible that the government has really fallen down on its job so badly that no deal means no planning but we would expect at least a year’s transition, mutual recognition of standards, allies already promising trade deals, infrastructure planning at ports. It is also unlikely that the EU would allow a collapse in derivative markets and 100,000 people would leave the UK with no-one coming in.

This post was originally published by the author on his personal blog: http://pol-check.blogspot.com/2018/11/bank-of-england-gives-green-light-to.html

Dr John Sydenham has worked in International Pharmaceuticals and for one of the "big four" International Consultancies. He ran a successful company for 15 years and after selling the company devotes his time to travel, science, black labradors and freedom.
Previous Sophistation tastes or just snobbery and ignorance
Next Don’t say we didn’t warn you.