Be Careful what you Wish For

It has been evident for some time that the EU Referendum could be overturned.  This is still not certain but possible.

Things looked bleak from the very beginning because the government that was to negotiate Leaving had a Remain Prime Minister and a Remain Chancellor.  This was not surprising because only about 25% of MPs supported the independence of the UK.

If the Referendum is overturned I will continue to support the UK leaving the EU but I fear that the bulk of the population will simply have grown tired of the fight for the the UK to be an independent country.

What will the future bring if the Referendum is overturned?  It will bring a rapid acceleration of EU Union.  The “victors” will see this as the way to ensure that the British will never be able to threaten the EU project again.  Full Union will be fairly easy for the EU because it is in the hands of the EU Council and does not need further Treaties.  The “shared competences” that encompass most of government can be turned into areas of EU control with little difficulty and most National Government powers will pass to Brussels.

I am white and well heeled.  EU full union will not affect me much.  If our children’s children survive the wars and oppression that a Franco-German state will inflict on them a freedom loving, independent UK may rise again from the ashes in the 23rd Century.  Or the UK may simply be gone forever to be reviled in the history books of the victors who write history.

I have been lucky enough to travel the whole world and can assure you that the UK is at the heart of the idea of freedom.  Freedom is not universally valued at all.  When the UK has gone individualism and freedom will slowly die.

If the Referendum is overturned then perhaps, in a thousand year’s time, historians will see the period from 1642 to 2019 as an amazing experiment in liberty that failed even as, after WWII and the fall of communism it looked as if it had won.  Will they realise that it was our own children who killed it?  Teach your children well, the EU understood this with their pan European “support” for education that ensured that an internationalist, pro-EU slant was added to the curriculum and 70% of UK teachers were converted to “Remain”,  but our own politicians forgot it. 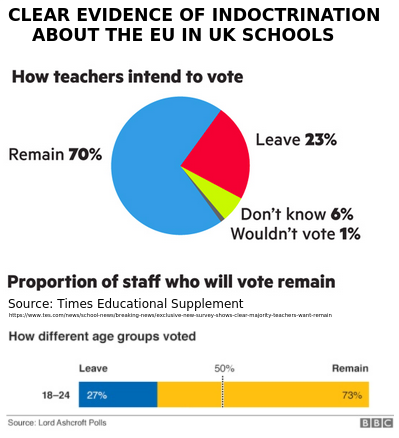 This post was originally published by the author on his personal blog: http://pol-check.blogspot.com/2019/09/be-careful-what-you-wish-for.html

Dr John Sydenham has worked in International Pharmaceuticals and for one of the "big four" International Consultancies. He ran a successful company for 15 years and after selling the company devotes his time to travel, science, black labradors and freedom.
Previous Dying in a ditch
Next The UK is none of Ireland’s business