Boris Johnson must explain Brexit to win the country.

The bulk of those who support Remain want to hear why we are embarking on Brexit.  They really do not know.  Boris Johnson must explain why leaving the EU is essential.

The most important reason for leaving the EU is that it has been given power over most aspects of government.  It delegates this power to the EU Nations at the moment but can take it back whenever it desires. Don’t believe this? Click here for full details.  No further formal Treaties are needed for the EU to adopt almost full governmental power over the UK.  This in itself should be enough reason for anyone who wants to live in an independent country to leave.

There will be some people who are not sure that they want to live in an independent country if the EU provides prosperity.  But the EU is not now providing prosperity.  The economic data shows that the EU is regionalising the UK.  It is turning the UK into a dependent region of the EU in the same way as the South West is turned into a dependent region of the UK.  Dependent economic regions are created when the financial centre of a country buys up factories and services in a region and turns them into warehouses and call centres.  The real production then occurs near the financial centre.  In the UK London and the SE has turned the rest of the country into dependent regions, in the EU it is the centre of the Eurozone that is regionalising the whole continent. The EU is sucking over £60bn a year out of the UK productive economy.  This regionalisation is occurring at an alarming rate in the EU.  As the EU becomes ever more regionalised ordinary British workers will be forced, like Greeks, to find their employment on the continent.  Don’t believe this? Click here for more details.

When talking to those who support remaining in the EU most believe they are on the “moral highground” having been told that they are the anti-racists.  But racism is far, far worse in mainland Europe. Most EU countries have little in the way of race relations legislation.

True anti-racists would be extremely concerned about the long term future of the UK ethnic minorities in the EU, especially now that the Far Right parties in the EU, such as the French National Rally, see their future as creating a Far Right EU.  Migrants did not just queue up in Calais for economic reasons, they came to the UK to escape racism.

“Among foreigners, English people are known for being very indifferent, or tolerant, to other people’s choices in life, be it how you are dressed or whether your partner is from a different ethnic origin. It is quite common to meet mixed race French couples in London: is it because the pressure of the society is less evident or is it just a coincidence? Nobody really speaks about it openly.” See living as a mixed race couple.

Although Britain welcomes those who have come here to stay it must be recognised that this country is a relatively small island.  If migration rates stay at their current level our land will be utterly unsustainable and spoilt. 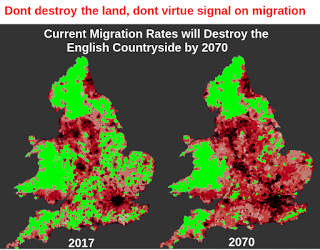 This is a major reason why the rural English want to control migration.  We are not racist, it just makes us weep to see our beautiful land covered in housing. You cannot be Green and support the EU.  Don’t believe migration causes overpopulation? Click here for more details.

Many people see remaining in the EU as the stable option.  They imagine that everything will stay the same.  This is not the case.  The EU has changed rapidly and is nothing like the Common Market that the UK joined in the 1970s.  The ultimate objective is a single nation.  The founders of the EU were absolutely clear that they were founding a “United States of Europe” that would be created over decades of steady change.  The EU is the unstable option.  Don’t believe this? Click here for details.  Some people may be thrilled at the thought of living in a single EU nation, leaving behind their friends and family to work in Frankfurt, but they should remember that most of the EU does not use Common Law, for instance jury trials are unknown in Germany and 12 of your peers will not be there to save you if you are accused of crossing the line.

There are many other reasons for Brexit (see Reasons for Independence) but leaving the EU now is an urgent necessity before we get fully ensnared by the process of EU State creation.  As for the costs of actually achieving Independence they will not be high and The Treasury and IMF have shown that they cannot be trusted on Brexit.  Project Fear Mk1, which was about economic collapse as a result of the Referendum, did not happen and Project Fear Mk2 which is about the effects of “No Deal” is equally absurd. Click here for details.

This post was originally published by the author on his personal blog: http://pol-check.blogspot.com/2019/06/boris-johnson-must-explain-brexit-to.html