It will be shown below that the Treasury has been using incorrect “predictions” to influence the debate on Independence.  If the Conservatives are truly now a pro-Brexit party they must publicly rebut the Treasury Reports.

There have been two high profile sets of Treasury Predictions during the campaign for Independence from the EU.  The first predictions were HM Treasury analysis: the immediate economic impact of leaving the EU, these were issued in May 2016 to affect the EU Referendum and the second set of predictions, issued in November 2018, were EU Exit: long term analysis and these have been used by MPs to prevent a WTO Brexit.

The 2016 predictions are widely accepted as being wrong by those who have studied them. They predicted that GDP would be 6% lower two years after the Referendum (a £120bn loss) and unemployment would rise by 500,000.  When we compare UK GDP growth with the other leading EU economies it can be seen to be following a similar trend: 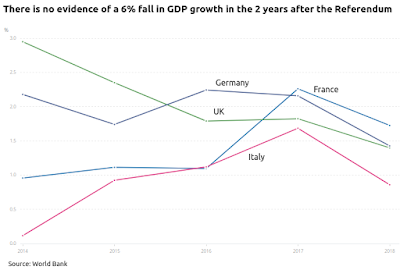 There is no real evidence that the Referendum affected GDP at all.

Unemployment fell steadily after the Referendum: 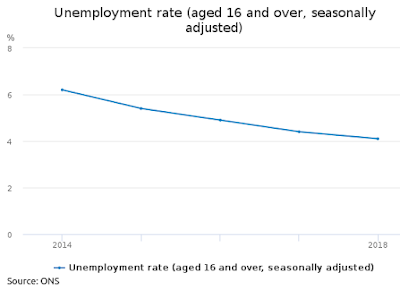 So the principle, headline grabbing predictions, were entirely wrong.  The only prediction that was vaguely right was that the pound would fall over the 2 years but this was right for the wrong reasons, the pound is falling because of a long standing Current Account Deficit on the Balance of Payments (largely a deficit with the EU).  The pound had been falling steadily since 2014:

The failure of the Treasury Predictions in 2016 has scarcely been covered by the Broadcast Media.  This has allowed the population to trust the Treasury.

A Government that was truly seeking independence from the EU would have issued an apology for the 2016 predictions.

The 2016 prediction have rightly been called Project Fear. They were based on guesses at the effect of uncertainty on the UK economy after the Referendum and before the UK leaves the EU.  Now we must call these predictions “Project Fear Mk1” because there have been an entirely different set of Treasury predictions, allegedly based on post brexit trade.

The punch line for these predictions is this graph (p81 of report): 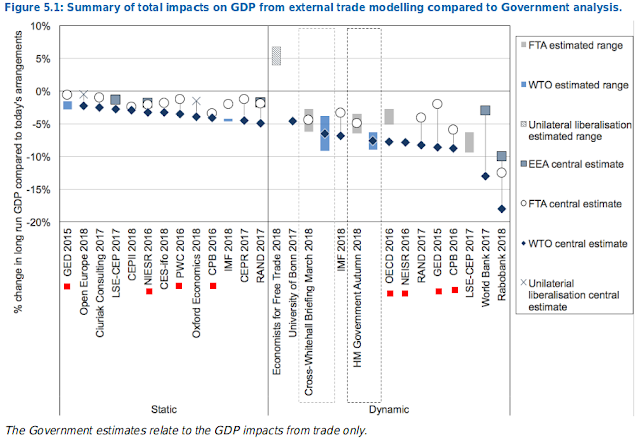 In the case of a WTO Brexit the IMF has a Scenario A that has small scale imaginary effects and in scenario B large scale imaginary effects.  No one actually knows how disrupted borders will be.  The French reassure us that there will be no disruption on their side and the government now say disruption will be minimal on the UK side.  However, the IMF are ignoring those who control the borders and are using an imaginary numbers for disruption.

The IMF graphs above are for April 2019.  The IMF did not change its predictions in its October report despite the fall in UK GDP being imagined to be due to lack of preparation. Preparations for a WTO Brexit have been much stronger in the past 3 months and should have led to a re-appraisal of the IMF figures.

Once the assumption of reduced population growth is subtracted from the IMF figures they price leaving the EU at about £50bn – five years EU net contributions.

If the Government truly supported Brexit they would apologise for Philip Hammond’s Treasury figures for No Deal.  They would explain that half of his data points were discredited, they would apologise for mixing up population growth and economic growth, they would point out that no economist can predict more than 18 months into the future, they would tell us that the planning for leaving with No Deal had now reached a stage where the “disruptive” scenarios are history.  Most importantly they should point out that the Treasury and IMF have an appalling record on Brexit that smacks of political interference and cannot be trusted to give unbiased predictions.

Having made this apology the Government should firmly state that MPs are not opposing No Deal, they are opposing Brexit. There is nothing to fear from No Deal and, even if there were, the risk was factored in to the Referendum which was Project Fear vs Independence and in 2016 Project Fear was more expensive than it is today.  Otherwise nothing has changed.

This post was originally published by the author on his personal blog: http://pol-check.blogspot.com/2019/10/boris-johnson-must-publicly-reject.html

Dr John Sydenham has worked in International Pharmaceuticals and for one of the "big four" International Consultancies. He ran a successful company for 15 years and after selling the company devotes his time to travel, science, black labradors and freedom.
Previous Brexit betrayal – don’t lose faith in democracy yet
Next Brexit witching hour