Brexit – what happens next

At present there are only three options available for Brexit.  These are the approval of a changed Withdrawal Agreement, a No-Deal Brexit and an extension of Article 50.

The EU is insisting that the Withdrawal Agreement cannot be changed.  The EU always plays hard ball in negotiations so no-one is actually believing this position.

A No-Deal Brexit is an essential option if the UK is to respond adequately to the EU negotiating position.  It is difficult to understand why MPs who support the Single Market or Customs Union believe that No-Deal should be taken off the table because that would immediately remove any power from the UK negotiating team and allow the EU to dictate terms.  Fortunately Yvette Cooper’s recent amendment to forbid a No-Deal Brexit was defeated in Parliament.  However, she has another in the pipeline – see below.

An extension of Article 50 has been discussed widely.  It is the preferred option of Labour and Remain MPs.  Labour believe it will keep the Tories on the political rack until they self destruct or call an election, Remain MPs believe that while the UK remains a member of the EU there is a chance of the Referendum result being overturned.  Yvette Cooper and Oliver Letwin have proposed a motion to extend Article 50 that will be heard on 27th February.  As the Parliamentary Research Briefing shows, an extension of Article 50 would require approval from all 27 EU States and is by no means a foregone conclusion. Several EU Leaders have voiced concerns about the uncertainty of extending Article 50.  The Lithuanian Prime Minister was particularly vocal in opposition to extending Article 50.  The EU is against extending Article 50 unless there is a clear agreement in the UK Parliament on the way forward (see Note 1).

So what is going to happen?  I believe that the EU will not extend Article 50 unless the UK has a definite plan.  I also think that the rational approach for Theresa May is to simply end all the in-fighting and division by declaring Brexit on 29th of March.  Once the UK is out of the EU there are no Remainers or Leavers.  The issue is closed.

When the broadcast media talk of legislating against No Deal they normally mean extending Article 50, however, the UK broadcast media is exclusively Remain so they may also mean abandoning Brexit altogether..  such a move would destroy the Labour and Conservative Parties and polarise British politics for decades.  It should not be forgotten that “No Deal” only exists because Remain MPs have resisted leaving the EU, seeing the Referendum as approval of staying in the Common Market (Single Market) rather than a vote to Leave.

Remain MPs always prefix “No Deal” with words like “disastrous” but the Treasury and Bank of England predictions for no-deal were brazenly fixed by including in the small print massive reductions in UK population growth after No Deal and using a baseline for predictions from 2016, effectively lumping global downturns in with Brexit.  The Bank also stated openly that its worst case no-deal predictions were for the absolutely worst case imaginable with no measures of any sort being taken to ameliorate any potential dislocations.  Remain MPs have been using these imaginary figures as a true account of the results of No Deal.  The truth about No Deal is that it will be slightly painful but nowhere near as bad as the 2008 bank collapse and the country will recover within a year or so with the Referendum result respected.

As it turns out, the uncertainty over Brexit is damaging the Labour Party almost as much as the Conservatives. The departure of seven Labour MPs (Ann Coffey, Angela Smith, Chris Leslie, Mike Gapes, Luciana Berger, Gavin Shuker and Chuka Umunna) to form the New Independent Group opens up a split in Labour’s ranks that may grow.  Three Tories (Anna Soubry, Sarah Wollaston and Heidi Allen) have also now defected to the TIG.  The TIG is composed of individuals who have been supported by the European Movement and Big Business. See Who is paying for Remain and the “Peoples Vote”.  This new group is actually about a last ditch attempt to overturn the Referendum result.

The consensus of independent economic forecasts for 2019 is reasonable growth for the UK economy, probably higher than that of Italy and Germany, whether there is a deal or not.  The exception to these predictions are those of the Bank and Treasury. What is particularly puzzling about all of this debate over No Deal is that the Treasury and Bank of England predict that the growth rate of the UK economy after 2021 will be almost identical whether there is a Deal, the UK remains in the EU or there is a disorderly No Deal. The graph below shows GDP growth % but the GDP per head growth is actually better in the No Deal scenarios than in the Remain scenario because of the vast decrease in population growth predicted by the Bank. 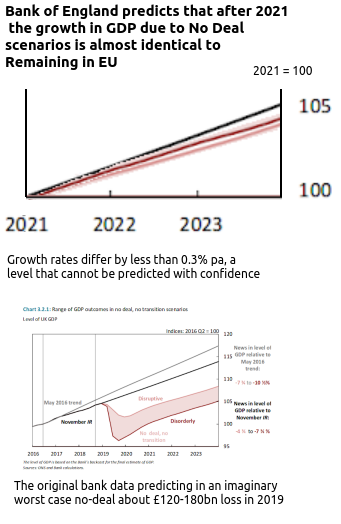 The real issue is whether there will be a £120-180bn loss in 2019-20.  The “losses” predicted by the Bank and Treasury in their No Deal scenarios were for the absolutely worst possible contingencies.  These have been taken by Remain supporters as the likely outcome of a No Deal Brexit. The Referendum was largely a battle between Remain, who maintained that Brexit risked £120bn losses, and Leave who said this risk was worth taking.  Even the hugely exaggerated risk of possible losses in a No Deal Brexit has already been sanctioned in the Referendum, the electorate approved it. Given this approval of the risk the Government must press ahead with No Deal if a changed Withdrawal Agreement is rejected by the EU or Parliament.  It is the only way to unite the country on the 30th March when Remaining will just be history.

Note 1:  Of course, it really is pointless for the EU to extend Article 50 if there is no sign of agreement in the British Parliament, as Barnier said:

“If Britain asks for an extension, it has to be approved by EU leaders. They will only agree if three questions are answered: first and second, why and how long? And third, will not that be a problem for holding the EU elections in May? I have no clear legal answer to the third question yet. It is important that the EU’s democratic processes are not disturbed by this, however.

The first two questions are complex and interconnected: it needs a stable majority in London for all laws related to Brexit that need to be adopted. This will need time.”

This post was originally published by the author on his personal blog: http://pol-check.blogspot.com/2019/02/brexit-what-happens-next.html

Dr John Sydenham has worked in International Pharmaceuticals and for one of the "big four" International Consultancies. He ran a successful company for 15 years and after selling the company devotes his time to travel, science, black labradors and freedom.
Previous The philosophy of Dostoevsky: Chapters 4 and 5 Review
Next Banning No Deal is banning Brexit