CANZUK: A firm alliance between Canada, Australia, New Zealand and the UK

The world is changing rapidly. China is rising and the mighty dollar is under attack from all sides. Never has there been a time when knowing who are your friends has been more important.

It is not time for the UK to enter another EU but it is time for the UK to consider close ties with large trading blocs and review its security future.  Is CANZUK – a close alliance between Canada, Australia, New Zealand and the UK – the answer?  Can we learn from the EU experience and form a union that avoids the pitfalls of the EU?

Freedom of Movement is the most contentious issue for the UK because we are a small island with the most beautiful man made and natural landscape.  Overpopulation is a real problem for the UK.  Freedom of Movement may also be an issue for countries like New Zealand which have set aside large areas of land for nature and could be swamped by an influx from the UK.

Any arrangement for Freedom of Movement should be between countries with a similar level of development and wages so that there is not a huge influx or exodus of people within a bloc.  CANZUK would obviously fulfill this criterion but to protect any nation in the bloc from excess flows of people it should be possible to review and impose temporary quotas on Freedom of Movement if it becomes a problem for any member.

A free trade area with no tariffs and no quotas is enhanced if countries in a bloc do not have industries that could be overwhelmed by production in other bloc members.

There should be some complementary production between the nations of an economic bloc. The fact that the UK does not compete with Canada and Australia in primary produce and New Zealand focuses on fine agricultural produce is an advantage.  The economies of CANZUK are certainly more complementary than those of the EU where the Netherlands, France and Germany have very similar economies which results in regional domination of the whole EU and the merger of national producers.

The greatest apparent similarity and potential clash is between Australia and Canada. UK production is highly diversified so its overlap with the others is not as great as the broad headings on export tables such as “Vehicles” or “Computers” suggest.

CANZUK would need to guard strategic industries in each member, ensuring that there is always some minimum of production left even when it appears that this is uneconomic at a particular time.

Were CANZUK to become a full free trade area the UK might become the gateway to the European market in primary production.The greatest enemy facing any economic union is regionalisation.  The lesson that the UK should have learnt from its EU membership is that all of the countries in a union should guard against excessive flows in any direction within the union.  There needs to be an organisation at the highest level in a bloc that ameliorates excess flows and concentration of wealth and production.  As an example, if Canadian car production were to threaten Australian car production the CANZUK regulatory body would investigate the possibility of a partnership between the Australian and Canadian car industries to forestall the closure of Australian car plants.  Although the economics may favour a huge plant in Toronto the health of the parts of the bloc is more important than simple economics, provided joint ventures are sustainable.

CANZUK may also provide an answer to the Scottish problem by offering the Scots an alternative to the EU in a CANZUKS.The biggest advantage of CANZUK is security and negotiating strength.  The history of the four countries is such that we can trust each other on matters of security more than we can trust any other nations.The four nations together have a total GDP of  $6.22 trillion.

This compares with $20.5 trillion for the USA and $15 trillion for the EU (without the UK).  The scope for growth is far higher than that of the EU and even higher than the USA given the right policies.  CANZUK would be one of the big five in global negotiating strength (China, USA, EU, CANZUK, India) and would certainly be able to hold its own in the WTO etc.

The constitution of CANZUK would need to avoid the mistakes of the EU. Although the four countries would sign up to mutual support, freedom of movement, rule of law and economic ties CANZUK must avoid a Single Currency and Parliament.  CANZUK must always be a Federation of Equals.  Any expansion of CANZUK would only occur if it had overwhelming support from the People.  CANZUK would be a beacon of cooperation between independent states for the world.  Liberty and Independence should be its motto.

This post was originally published by the author on his personal blog: https://pol-check.blogspot.com/2020/07/canzuk-firm-alliance-between-canada.html 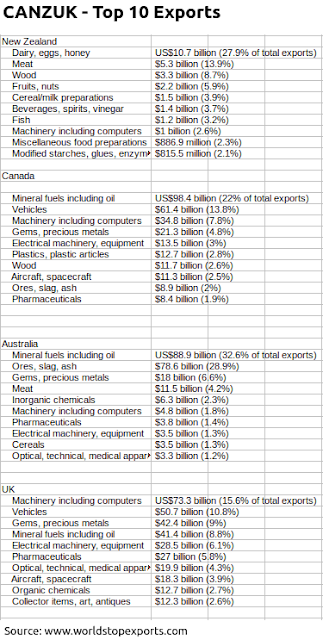 Dr John Sydenham has worked in International Pharmaceuticals and for one of the "big four" International Consultancies. He ran a successful company for 15 years and after selling the company devotes his time to travel, science, black labradors and freedom.
Previous In Defence Of JK Rowling
Next How to stop Scottish nationalism