What shall we call them?

The Great Indy and Ref Swindle

With the tragic murder of George Floyd in the states, the Black Lives Matter movement was imported into British society. British historical statues became fair game, and the introduction of ‘white privilege’ emerged. Many people have been using their social media platforms to spread misinformation pushed by the profoundly divisive far left Black Lives Matter organisation. Usually, it is the same type of woke middle-class university-people who feel ashamed of the supposed inherent privilege. You can identify yourself as being apart of the woke middle-class person by addressing the following criteria:

If you fit one or all of the criteria, then you’re officially apart of the self-loathing anti-British middle-class and kindly fuck off and leave the Labour Party to be governed by patriotic working-class people. 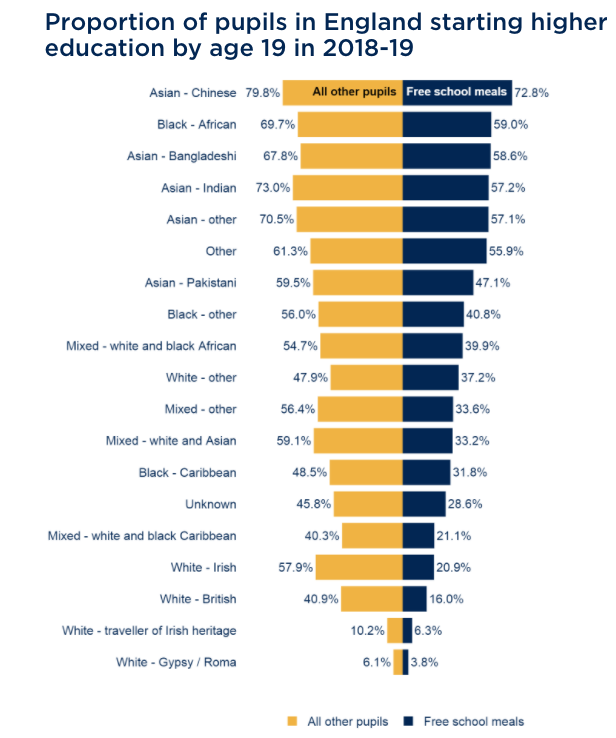 One of the biggest lies perpetrated by the left is that having a white characteristic gives you an inherent advantage in life. However, the data in the UK provides a different picture.

The White British population is significantly below other characteristics in attending high education. Only 16% of white working-class Britons attended university compared to 72.8% of the Asian-Chinese community and 69% of the African Black population. The white population experiences the most significant social-economical distinction, with middle-class students being almost three times more likely to attend university than their working-class white counterparts. To be born poor and white in 21st century Britain means you have fewer opportunities than everyone else, mixed in with racial prejudice and social-economic disadvantage. The native working-class community in these islands is in peril.  This a damning verdict on the state of Britain in the 21st century.

All parties in the UK must return to supporting its traditional voter base and treating its traditional heartlands with more respect and decency. The Labour in particular must reject critical race theory and the dangerous false concept of white privilege. The BLM has no actual evidence of the existence of  white privilege being a reality in the UK. An old Texas saying comes to mind “The smallest dog barks the loudest”.

Kaide is passionate about politics and history. He is currently a University student and writes about notable events relating to British military history, Brexit, the Commonwealth and the CANZUK Movement. Alongside that, Kaide is undergoing training to be a British Army Officer.
Previous Could the SDP be the UKIP of the left?
Next CANZUK Story #2 – Let’s get CANZUK done

The Cover Up for COVID is worse than the disease, much worse

Why is the origin of COVID being suppressed in the media?  There is clearly a …