We have the chance to kill off Scottish nationalism

Just after the Brexit vote I came back from holiday and found a string of messages from Pro UK people. They were worried. Nicola Sturgeon was continually on the television complaining about something or other. Far from encountering systematic bias from the BBC, she was getting encouragement. At least she wasn’t one of those dreadful Brexiteers.

People were asking me where have you been. Some were angry that I had encouraged them to vote to leave the EU. Look what you’ve done. The pound will soon be worth nothing. The markets are going to crash. We’re all going to lose our jobs and we’re not going to have a Prime Minister for months. Nicola Sturgeon is going to call a second independence referendum and she’s going to win it. It’s all your fault. 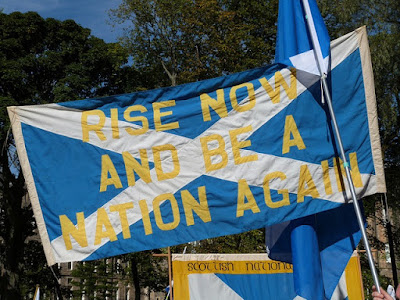 There is something feverish about news at the moment. It must be to do with it being on all the time. They have to fill up the time with something. When there is a plane crash there are endless interviews with experts who know absolutely nothing about what has happened. When there is a budget there are continual speculations about what will be in it. Why not just wait a few hours and find out? Well so too with the EU referendum. There was endless noise. Much of it was just people complaining about the result and signalling that they were not and never had been a Brexiteer.

Scotland didn’t vote to stay in the EU, nor did England and Wales votes to leave. None of these places are members of the EU. Try counting the members if you are unsure. Scotland is no more  a member of the EU than is Aberdeenshire or Antrim. When the Scottish Assembly was established it was on the basis that it had power over certain matters and didn’t have power over certain other matters. That is what the majority of people in Scotland voted for. Foreign affairs have never been devolved. International relations take place between independent sovereign nation states. Many people in Scotland would prefer that Scotland was such a state. But again we had a vote on this and they lost.

The endless noise from Nicola Sturgeon is based on a simple mistake. It is of course a deliberate mistake. She thinks that if she acts as if she were the leader of a sovereign independent nation state she is more likely to become one. But really Scottish nationalists ought continually to be reminded of a simple matter of logic. You cannot become what you already are. If you already are independent, why are you campaigning for it? But then Sturgeon’s grievance collapses. She is complaining about something that was never within her remit and which the electorate in Scotland has more than once decided not to give her the power to control. Until and unless Scotland becomes independent it will not be able to have foreign relations with other sovereign independent nation states.

Most news and most comment about news is trivial. The reason for this is that most news will be forgotten a year from now. Political comment likewise is usually of no consequence. There was endless comment during the last General Election about what would happen if there were a hung Parliament. Today there is a lot of noise about Theresa May’s trousers. Nicola Sturgeon’s talking head after the Brexit vote was of no more consequence than these lederhosen. It is vital to see through the day to day noise and try to think about long term consequences. What matters is not that an argument works today, but that it works a year from now.

Nicola Sturgeon talks about all sorts of conditions that must be met or else she will call an independence referendum. This is all noise. There is only one condition. Can she win it?

The whole narrative is ludicrous. Supposedly the UK Government has to make all sorts of concessions to the SNP or else Nicola Sturgeon will do what she wants to do more than anything else in the world, i.e. have another independence referendum. But let’s say the UK Government gave the SNP everything they could possibly dream of. Imagine if the Scottish Parliament was given even more powers, and even more money. Imagine if there was another Constitutional Convention and Gordon Brown made another vow. Imagine if the UK became a federal state. Imagine if all these things happened would it kill of the hydra of Scottish nationalism. Would the SNP cease to want independence?

All sorts of weird and wonderful schemes are dreamed up by which Scotland somehow gets to stay in the EU or the Single Market. These are then presented as the condition for the SNP not calling a second independence referendum. But what if Scotland were given this special status? Would this mean that we wouldn’t have a second referendum five years from now or ten years from now? Of course it wouldn’t. So why bother. We have to learn the lesson that there is no appeasing nationalism. There is nothing the SNP wants except independence. So no more Constitutional Conventions please, the last one has done enough damage. The UK needs more unity. We need to go in the opposite direction to the one in which the SNP wants to travel.

Again it is important to look at matters from a more long term perspective. There were a few opinion polls in June and July that showed support for Scottish independence had increased. This was one of the reasons why people were writing to me in a panic. But polls go up and down and anyway they are wildly inaccurate. What matters is the fundamentals. Leaving the EU makes Scottish independence harder.

Voting for Brexit in the short term angered quite a lot of Scots who found themselves on the losing side of the argument. It angered a lot of people in the rest of the UK too. Naturally this had a short term effect on opinion polls. But just like news, these day to day emotions are trivial. This is human nature. We get angry, but then we get bored. Each of us had a huge emotional reaction to Brexit, but it was also complex. I was pleased, but scared and uncertain. Would the scare stories come true? For the first month I read everything I could about Brexit, but then I got on with my life. I stopped following every detail. Above all I stopped listening to Nicola Sturgeon.

The last six months hasn’t been a disaster for the UK. Perhaps next year will be. Lots of people seem desperate for leaving the EU to go as badly as possible. It’s a peculiar sort of masochism. Above all it’s peculiar if you want the UK to remain intact.

Most Scots just got on with their lives in the past few months. Whichever way we voted in the EU referendum we got on with daily life. We put the debate behind us. It is for this reason that support for Scottish independence has not increased and instead has fallen. I didn’t take part in the SNP’s national survey. But then I don’t know anyone else who did. Apparently SNP activists were going to ask all their friends. That seems an excellent method of coming up with an unbiased sample. I’d love to know what the results were, but the SNP won’t tell me. But then again I don’t need them to tell me. Imagine if two million Scots had told the SNP that they were desperate for another independence referendum. Would the results be secret under those circumstances?

Some disappointed Remainers will continue to try to prevent Brexit or to turn it into leaving in name only. They will fail. But they might help the SNP. 2016 was a year of revolutions and the momentum from this is liable to continue into 2017. The UK electorate is sick of an establishment that has ignored its legitimate concerns for decades. That is the fundamental thing that happened this year. That is the thing that will remain news a year from now. In time it may even topple the Scottish establishment. Who are they? Well they have been in power for quite a long time now.

The EU apparently wants to be as nasty to Britain as it can be. Again some Remainers will cheer them on. They will be delighted that the EU wants to make leaving as unpleasant as possible that it considers those who attempt to escape as deserving severe punishment. I get the impression some Remainers think that the EU is really called Stalag Luft III and that Brexiteers deserve to be shot by machine guns in order to discourage the others. But this too won’t work. Once you have turned your beloved EU into a prison, you have lost the argument. What’s more the revolution is contagious.

We have seen off worse than the EU and we have also been isolated before with the whole of Europe against us. This just helps British unity.

The SNP thinks that Scots prefer the EU to the UK but they are mistaken. We all want free trade and we all want to be able to live and work in Europe. But few indeed of us want more than this from the EU. When did you last watch a debate in the EU Parliament? Some of us vaguely think of ourselves as internationalists. But Scots who want to create a border between England and Scotland are a peculiar sort of internationalist.

Brexit makes the choice for Scottish nationalists particularly delightful. Do you want to live in a Britain that is not ruled by the EU or do you prefer to be an “independent” Scotland subject to ever closer union more and more ruled by Brussels and ultimately by Berlin? Do you want to end up in a different trading bloc to your closest trade partner? Do you think a place with five million people will get a better deal from our European neighbours than a place with sixty five million people? Do you think that the UK leaving the EU makes it more or less likely that they would share a currency with Scotland? If Scotland were in the Single Market, but England was not would there have to be customs at Gretna? Do you know that the EU countries that want to discourage secession will even allow Scotland to join in the short term? How sure are you that the EU will even exist in ten years? The Visegrád Group don’t seem very keen on being bossed around and Italy has become the new Greece.

Brexit forces Scottish nationalists to choose. It makes the disadvantages of Scottish independence more acute. It makes any split from the other parts of the UK more fundamental and deeper. If we can make Brexit work, if we can show that prosperity awaits the UK outside the EU, we have the chance to kill off Scottish nationalism. So all Pro UK people should work together to get the best Brexit deal possible. The Scottish nationalists would love it if Brexit were to fail. They have the excuse that they hate Britain. Do you?

This post was originally published by the author 17 December 2016:  http://effiedeans.blogspot.com/2016/12/we-have-chance-to-kill-off-scottish.html

Effie Deans is a pro UK blogger who works at the University of Aberdeen. She spent many years living in Russia and the Soviet Union, but came home to Scotland so as to enjoy living in a multi-party democracy! When not occupied with Scottish politics she writes fiction and thinks about theology, philosophy and Russian literature.
Previous The EU Snubs Britain At Its Own Risk
Next Focus on the family