The White Riots in the USA

What is in common between the riots in the USA, Chinese expansionism, a Global Pandemic, Global Warming, drought, wildfires across Siberia, global economic collapse etc. ?

Is it the media?  Certainly the media are hysterical and determined to bring down the government in the UK and USA but as part of this program they have actually been suppressing news about China, Asian wildfires and several other important developments.

Is it a social change?  Political parties are no longer tolerating defeat in elections and Referendums and the tolerance that underpins democracy is indeed evaporating.  As an example the riots in the USA began with an appalling abuse of power by the police but this direct cause was rapidly addressed with criminal charges and investigations.  The continuing riots are now Democrats on the streets hoping to unseat Trump.

This behaviour is consistent with research that shows democracy is now supported by the minority in democratic countries.  However, this disintegration of the West only answers a few of the problems facing the world.

The human world is a “complex system”.  It is highly interconnected and bumping up against a host of constraints.  A feature of many complex systems is that when one variable suddenly changes it precipitates changes across the system which have not been foreseen or could not, even in principle, be foreseen. This complex system is made even more unpredictable by our politicians who seem to be blind to anything other than immediate political advantage and it is exacerbated by the favouritism shown to transnational capitalism such as banking, sovereign wealth funds & multinationals that intensify connections.

In a complex system sudden changes, such as the collapse of the oil price plus a global pandemic leave us floundering when trying to make predictions of what will happen.  The system is too complex. 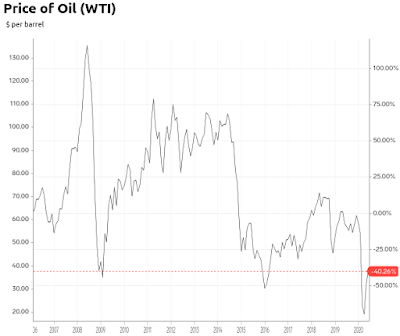 What we do know is that when a complex system is highly interconnected and experiences multiple insults there is an ever increasing chance of a “phase change”.  A phase change is where the system flips into another stable pattern.

The only stable ecological states are those that are either diverse or true deserts.  If we assault the global ecosystem with agri-deserts and urbanisation it will create instabilities such as crop failures and diseases or local and global depletion of resources that will eventually remove the agri-desert.  Such changes could take centuries or happen within ten years or less.

The most likely outcome at present is a flip to Hitec Tyranny.  As the Chinese will tell you, this is not at all pleasant and is almost impossible to remove.  The advantage of Hitec Tyranny for the governing class is that, once established, it is scaleable.  The population can be completely controlled so that if there are events such as severe Global Warming any population reduction can be covered up whilst the governing group continues to live in a privileged environment.  Economic collapses can be managed by plugging the population into smartphones and state media that tell them they have never had it so good.

All of this could be my reaction to bleak times and it is indeed possible that humanity might find the same answer to stability as ecosystems in general: diversity.  A diversity of sustainable nations is still possible but diversity is a dirty word in the West.  The transnational capitalists are frantic to create a centralised, global economic and political system that embraces China and they have successfully stolen the hearts and minds of young adults for this project.

I would feel confident in the West finding a stable democratic answer to the current challenges if the West felt confident in itself.  Unfortunately being confident in our culture is known as “racism” so we may have lost the battle before it has started.  Postmodernism has corroded our unity of purpose.  You can be absolutely certain that China does not have such a problem with racism and sees the Han as the naturally superior inheritors of the Earth.

You have got to hand it to the Postmodernist/Poststructuralist philosophers of the 20th century.  When they set the demise of the West in motion they certainly knew what they were doing.

This post was originally published by the author on his personal blog: https://pol-check.blogspot.com/2020/06/cheer-up-its-just-end-of-days.html

Dr John Sydenham has worked in International Pharmaceuticals and for one of the "big four" International Consultancies. He ran a successful company for 15 years and after selling the company devotes his time to travel, science, black labradors and freedom.
Previous You can’t fight injustice with more injustice
Next Barrow Grooming Gang Allegations