My joy at opening this week’s AAAS magazine “Science” was slightly blunted by the four pages of Chinese Government advertising that were followed by a long editorial article on how the Wuhan Institute of Virology (WIV) should be given NIH funds.  The article did not mention that due to the COVID debacle the WIV is now under Chinese military command so it obviously cannot receive US Government funding.  Even in science it seems that those who pay the piper call the tune.

China is also increasing its military spending this coming year by 6.6%.  In 2019 China already had the world’s highest military expenditure, allowing for the massive undervaluation of the Yuan (See OECD PPP value), China’s military expenditure was $913 bn ($261 bn) compared with $732 bn for the US (unadjusted SIPRI figures in brackets).  The adjusted figures are correct because even the US is buying military components from China.  China is a mercantilist economy that is a global trading predator and has arranged for the Yuan to be worth far more inside China than the exchange rate might suggest (c.3.5 times undervalued).

According to the Rand Corporation China achieved parity with the USA in many areas of military combat in 2017. 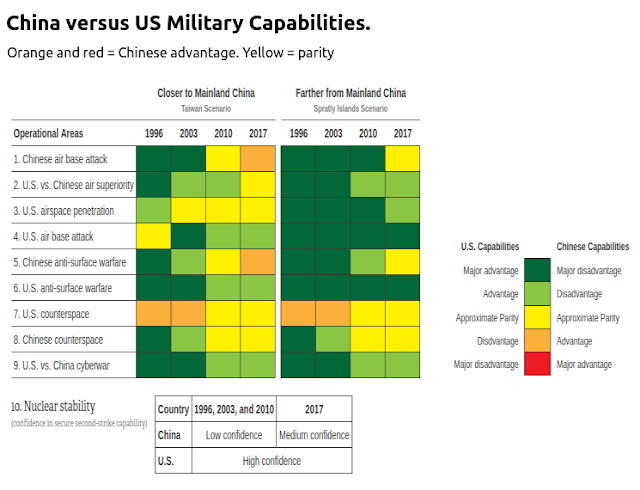 In 2017 China had the military capability for a “draw” when invading Taiwan.  In 2020 China would probably win.  Most disturbingly China is rapidly increasing its ability to project power far from home.

China is already winning the propaganda war.  It seems to have deep control of the broadcast media in the West, for instance the BBC is still publicising 5G disinformation about COVID19 on behalf of the Peoples Republic of China and calling any truthful criticism of China over COVID “conspiracy theories”.  In the EU and UK the broadcasters are steering well clear of analysing what “president for life ” means or what the concentration camps for Uighurs actually signify about China. China has also deeply penetrated Western Academia, a surprising and highly successful move that derails academic analysis of the Chinese military and economic threat.  The penetration of academia is probably an unplanned bonus of its 1000 Talents and other “talents” activities.

China has also recruited allies in Western Big Business.  The dependence of Apple, Amazon and hundreds of other large Western Corporations on Chinese manufactures and markets means that they are inclined to the Chinese view on many matters.  When Big Business lobbies about China they are lobbying to increase China’s advantage.

Putin expects that the 21st Century will be the beginning of Sino-Russian hegemony and Russia is likely to conclude a military alliance with China in the near future (See China-Russia alliance on horizon as nuclear arms treaties crumble ).

I hate to say that the West has probably “blown it”.  Chinese power has grown as fast of that of the NAZI Third Reich grew in the 1930s and our politicians have failed to react. It only took Germany 10 years to become a superpower.  There might still be time to cage China, if we fail to do this there will probably be a war, if we fail to do that the next millennium is Chinese Nazism.

Also see: Coronavirus: Strong evidence that it is man made: BBC Silent

Postscript:  The Chinese are disarmingly honest about their intentions. This comment was made by a Chinese commentator, Tong Zhao: “Tong said China’s conventional missile buildup has at least two broad objectives. One is to secure key national interests, such as reunification with Taiwan. Another is to assert territorial claims in the South China Sea and over the Japan-administered Senkaku Islands, which Beijing calls Diaoyu.
“The biggest threat to China securing these interests comes from the U.S. capability and intention to militarily intervene in these areas,” Tong said. “Land-based intermediate range missiles constitute a very effective tool for China to secure a military advantage around the first island chain and deter American military intervention,” he added, referring to the first line of major archipelagos off continental East Asia.” (See China-Russia alliance on horizon as nuclear arms treaties crumble ).

China has been openly telling us for the past 20 years what they intend for the world and our broadcasters are either stupid or believe that the West will be eternally dominant or are being paid off.

This post was originally published by the author on his personal blog: https://pol-check.blogspot.com/2020/05/china-are-we-too-late-to-react.html

Dr John Sydenham has worked in International Pharmaceuticals and for one of the "big four" International Consultancies. He ran a successful company for 15 years and after selling the company devotes his time to travel, science, black labradors and freedom.
Previous Magna Carta & the English roots of Liberty
Next If you want to oppose separatism, don’t be separate