Documenting the Decline and Fall of the West

The West was born at the end of the Second World War when the Western Allies (USA, UK, Canada, Australia, New Zealand, British Commonwealth) controlled a vast army, navy and airforce and had nuclear weapons.  The West had defacto control of most of the world except Eastern Europe, the Soviet Union and China.

Within 12 years the Western Allies established the World Order of the UN, GATT (WTO), OECD, IMF, EEC (EU), World Bank etc.  that has dominated all of our lives ever since.  The Western Allies kept their military alliance as NATO and SEATO and became the rather ill defined “West”.

Empires rot from within.  Perhaps the hubris of being at the apogee of power such as the British in 1870 or the Romans in 250 or the USA of 1990 provides the seed of the rot.  This hubris means that the generation that never fought for the empire believe that power and security is their birthright and will be eternal.  When the rot begins the external enemies feed it, knowing that as the empire decays their turn will come.

The current hubris of the West is breathtaking.  Having travelled to much of the world it is obvious that the billion people who regard themselves as natives of the West are not just a small minority of the global population but have lost their technological and financial edge over the rest of the world.  Yet when I return home the mass media and even the social media portray the world as Western dominated or as eagerly awaiting to be Western dominated.  The populations in the West believe that all “rational people” accept the Western way of life so it is only a matter of time before the whole world accepts Western power.

However, the rest of the world tends to have a dim view of the West: 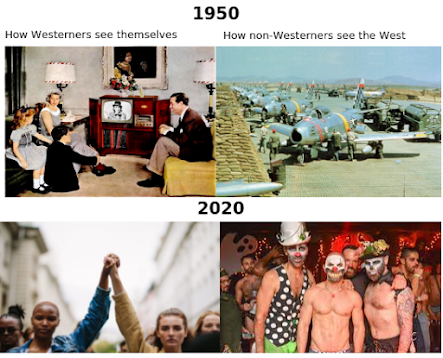 The ordinary people in the West have an arrogance about their power and the capacity of their social system to accept continuous dismantlement that is profoundly shocking to outsiders.

The rapid rise of the power of China is similar in speed to the rise of the Third Reich in the 1930s. The Western media have still not realised what has happened over the past 20 years.

The Years of growth and power

1945:  Allied victory in WWII. The Western Allies become the “West”.

1945-1973: The zenith of the militant West.  Marked by the Bretton Woods Era, the foundation of the UN, the EEC, the IMF, World Bank etc.

The Apogee of Western Power and Decline

1980s: The failure of democracies to outlaw movements that are dedicated to the end of democracy, such as communism, national socialism, postmodernism and postmarxism, is exploited to subvert the West.  The arts and, to some extent, the humanities in the West begin to identify their role as rebellion.  The Western Establishment has utter belief in the power of Western society to adapt to any rebellion.  Art becomes judged on its social and political radicalism rather than aesthetics.

1991: The West flexes its muscles in the Middle East and wins rapidly in the first Gulf War.  However, it does not follow the political logic of the campaign and leaves Saddam Hussein in power.

2001: 9/11.  The US has the entire world on its side after a vicious terrorist attack on New York.  With the opening of Guantanamo and Middle Eastern invasions the moral high ground is rapidly lost.  The invasion of Afghanistan in 2001 results in Western troops being bogged down for years.

2001: December, China allowed in the WTO.  This is probably the greatest mistake of the century.  It is pushed by Multinational Corporations in the West as essential and necessary.  It is billed as the essential step to China becoming a democracy.

2003: The Iraq War.  The West announces it is invading Iraq to neutralise weapons of mass destruction when it is obviously pursuing regime change.  This fools no-one and is a diplomatic error of enormous proportions.  The West is unable to extricate itself from Iraq.

2008-: China launches the “Thousand Talents Plan”  to infiltrate Western academic institutions, research establishments and industry. Surprisingly Western hubris is so vast that academic institutions are permitted to take any number of Chinese students.  British universities become heavily dependent on Chinese funds. Chinese graduates are allowed to stay in Western countries to occupy important posts and encouraged to do so by the Chinese authorities. Western authorities seem to have no comprehension that students were sent deliberately on the understanding that they would benefit China and that those who stay in the West have not changed allegiance, they are patriots.

The scale of the problem:

2012- China launches a campaign to control Western media. This campaign extends to financing the scientific press such as the publications “Springer Nature” (direct control) and “Science” (many full pages of advertising weekly).

2010-2020: Western troops still involved in the Middle East. This has a similar effect to the Vietnam War: the West can be beaten.

2013- : BLM is formed as a spin-off from the US Maoist Black Liberation Movement.  It has strong connections with China.  In 2014 it introduces the slogan “I can’t breathe” which becomes used by some Black people as they are arrested in the USA, most famously by George Floyd who chants “I can’t breathe” throughout his arrest until, ironically, he may have died from being unable to breathe.

2014- : the Uyghur Genocide. About 1 million Uyghurs placed in concentration camps by China. The West stands by and continues trade.

2019: A third of the population of Tibet is drafted into labour camps. This is ignored in the West.

2019- : The Wuhan Virological Laboratory performs experiments to enhance the infectivity of coronaviruses.  A global pandemic ensues, the West is silent and continues to trade with China.

2020: China imposes sanctions on Australia for demanding a full investigation of the origins of COVID. The West fails to support the Australians. The Western mainstream media scarcely mention what has happened to Australia.

2020: China demands that the EU remove any mention of possible Chinese involvement in COVID.  Twitter bans users who blame China.

2020: BLM protests occur globally, even in countries such as the UK that have virtually no deaths of Black people in police custody (1-2 a year out of 1m arrests) and relatively good records on equality legislation.  The genocide in China is ignored.  ID politics successfully trumps geopolitics in the media, there is almost no coverage of the South China Sea and Total Surveillance in China.

2021: The UK sends an aircraft carrier to the South China Sea to reinforce Western forces, to mockery from the UK media.

2021: Despite a Chinese controlled WHO report denying that COVID19 escaped from a laboratory various Western leaders and intelligence chiefs demand an investigation into COVID19 being a laboratory leak. Sir Richard Dearlove, Ex Head of MI6 said “.. the West had been naive in trusting China, which had infiltrated scientific institutions and journals in the UK and elsewhere.”  The Western mass media are heavily influenced by Chinese controlled publications such as “Nature” and by Chinese financed researchers so continue to deny China’s involvement in the creation of COVID19. The BBC even used statements by Peter Daszak and Shi Zhengli, both workers at Wuhan Virological Institute who might be directly implicated in any lab escape, as impartial commentators.

2021: China now has the largest economy in the world in International Dollars (PPP). This is still only about half of the size of the entire Western economy. It is the world’s leading trading nation and has about $3 trillion dollars in foreign exchange reserves to finance subversion abroad.

The end result?   Islamic and most other non-Western states are not convinced by modern Western society so the West has lost any moral leadership that it may have had.  China will replace the West as global hegemon unless the West triggers WWIII.  If China wins there will be a dark age for a millennium.  It is unlikely that the West can win without total war.  Most of us would lose our lives but humanity might be saved from sinking into the total surveillance society of China.

This post was originally published by the author on his personal blog: https://pol-check.blogspot.com/2021/06/documenting-decline-and-fall-of-west.html

Dr John Sydenham has worked in International Pharmaceuticals and for one of the "big four" International Consultancies. He ran a successful company for 15 years and after selling the company devotes his time to travel, science, black labradors and freedom.
Previous A wonderful, historic event
Next Kneeling to an unjust God