The House of Lords has just published its inquiry into energy security after Brexit – see Brexit: Energy Security. This publication is fairly complete in its coverage of the changes that will be needed in the coming year.  The government will have had almost 3 years to plan for Brexit by March 2019 so any blame for unpreparedness must lie squarely with the government, not Brexit.  The House of Lords does not seem to have spotted this obvious truth.

The House of Lords also fails to frame the document correctly.  The UK is leaving the EU which consists mainly of the Eurozone (the 19 states that together operate under Eurogroup economic management) and the UK.  In view of the Eurozone domination of the EU, the House of Lords document is a list detailing what measures must be taken to unravel Eurozone control of UK energy security.  This is the reality.

The Lords inquiry failed to name the key risk to UK energy security outside the UK.  This greatest risk is our excessive reliance on Eurozone suppliers such as EDF, EON, NPower, Scottish Power and ENGIE which at present use their privileged Single Market access to funnel Eurozone products and goods into the UK.  Problems in the Eurozone could lead it to switch supply to internal use, disagreements between the Eurozone and the UK could lead to energy blackmail and Eurozone companies could operate a cartel to steal from the UK economy.  Of the main energy companies, only SSE is not Eurozone owned so about 85% of the UK market is owned by the Eurozone.  This is an unacceptable energy security risk for the UK and should have been flagged by the Lords as a major issue.

Although the Lords failed to name the key risk to UK energy security the entire report is actually about this risk, detailing how difficult it may be to escape Eurogroup control and favour.

The report points out that although the EU supplies 12% of UK gas and 5% of its electricity, the EU tariffs are only 0% on electricity imports and 0.7% for gas imports. This means that the price of Eurozone supplied Gas and electricity will be scarcely affected by Brexit if the UK uses EU tariff rates.  The report does not note that the dominance of Eurozone energy companies within the UK  might lead to preferential importing of Eurozone product rather than developing UK product and hence be a long term risk to the UK economy.

The report mentioned that Brexit might allow state aid for new electricity generation technologies and allow the reconsideration of the charging structure applied to electricity traded over interconnectors. Both of these are critical to the future of UK energy security but were ruled as outside the scope of the Lord’s document.

The Lords found that skilled roles in the UK energy industry, such as engineers, were being occupied by EU employees.  The report exposed the fact that the construction of Hinckley Point was using a vast number of EU employees.  The Lords were troubled that immigration restrictions would prevent this use of EU labour and gave no thought to the fact that the UK can train its own people for such higher paid jobs. The Lords did not mention that other countries had installed Eurozone Reactors without huge numbers of Eurozone staff being employed, indeed, the Chinese insisted that EDF use Chinese staff when supplying reactors and now they make Chinese badged reactors using the EDF designs.

The Lords seemed to view the proliferation of gas and electricity interconnections with the EU as positive for UK energy security.  They did not consider that these would make the UK dependent on energy imports from the EU nor did they consider the fact that with 85% of energy delivery in the UK owned by the Eurozone the interconnectors would serve as a ready route for imports and could be cut at any time after Brexit.  The interconnectors would have provided a simple way for the Eurozone to discipline the UK had it remained in the EU. 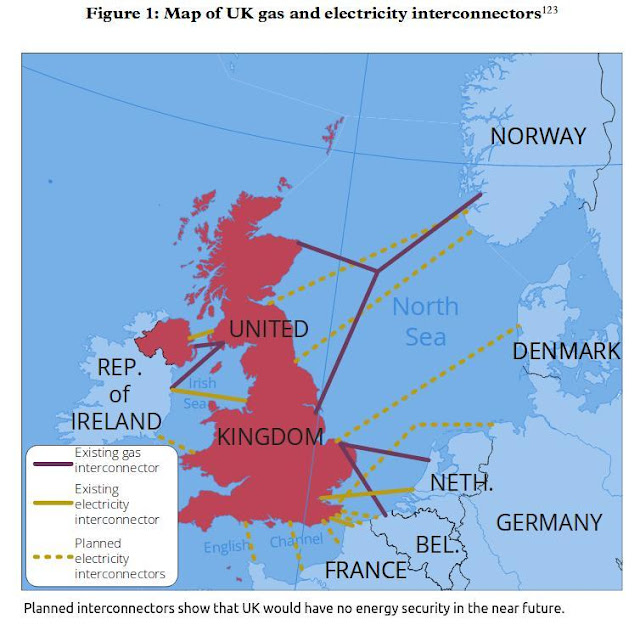 The Lords discussed how the UK could fund relatively low cost ventures like Horizon 2020, which deals with energy efficiency.  Curiously the Lords also mention that the UK, a major contributor to the European Investment Bank, would be deprived of EIB funds after Brexit without mentioning that it could use its own money rather than cycling it through the EIB.

The discussion of Euratom did not touch on the stockpile of plutonium held by the UK. The UK has 140 tonnes of plutonium which is enough nuclear fuel to fuel a 10 GW reactor for about 50 years or enough for centuries of supply using MOX technology, mixing the plutonium with low grade uranium.  The stockpile was only created because previous governments imagined this would be the fuel of the future.  Government dithering and state aid rules prevented the UK from developing the technology to exploit this resource.  The plutonium is now a liability, being enough to make perhaps 10,000 atomic bombs (critical mass P239 11kg) and almost impossible to dispose of without using it in a reactor.

The Lords noted that the UK had allowed perhaps half of its nuclear inspectorate to be sourced from the EU, a terrible lapse of guarding the nation’s energy security that disregarded all energy security contingencies – such as the UK deciding to leave the EU or a Eurozone move against nuclear power.  It also shows that UK governments have not been defending high tech, high pay employment in the UK but were happy to lose these jobs to the Eurozone.  The Lords seemed to have no insight at all into the effect of de-skilling a country except that we should continue doing it if at all possible.

The ITER project (civil thermonuclear power) was also considered to be under threat from Brexit but Korea, Russia etc. are part of the project so continued UK membership should not be a problem.  The money “given” by the EU to UK thermonuclear research (the JET project) is, of course, recycled UK funds and could easily and more cheaply be supplied direct by the UK.  The Lords failed to mention that the UK already pays via the EU.

Overall the House of Lords document has some important tick points for planning Brexit but reads like a campaigning pamphlet for the Remain position in the 2016 Referendum rather than an inquiry into energy security. It entirely fails to grasp the main energy security issue after Brexit, which is defending the UK against the Eurozone.  The Eurozone has 85% of the UK retail energy industry and the UK is in a perilous position if relations with the EU sour. Brexit is happening just in time, had all those interconnectors been built and further losses occurred in nuclear capability the UK might have had no independent energy security.

This is a shocking report because it shows that the Lords are living in the past, not realising that the EEC no longer exists and was inevitably going to create a cohesive economic bloc such as the Eurogroup/Eurozone.

Also see The Eurozone Trojan Horse which explains the problem of privileged Eurogroup access to UK markets that is causing Austerity and other problems right now.

E.ON is a German-owned group formed from the merger of German companies VEBA and VIAG. The group bought UK energy company Powergen back in 2002 but it wasn’t until 2007 that its UK energy operations were renamed E.ON.

Npower is a subsidiary of German energy company RWE Group. It was bought in 2002, having evolved out of National Power, later renamed npower, which had bought the likes of Calortex, Independent Energy and Midlands Electricity following privatisation.

ScottishPower is a subsidiary of Spanish company Iberdrola, who bought it in 2006. The company was formed in 1990 from the South of Scotland Electricity Board. It later bought Manweb, the energy company supplying Merseyside and North Wales.

In 2000, it bought SWALEC and it also owns Atlantic and Airtricity. It operates those brands plus Scottish Hydro and Southern Electric as subsidiaries of the main SSE group.

This post was originally published by the author on his personal blog: http://pol-check.blogspot.com/2018/01/energy-security-adter-brexit.html

Dr John Sydenham has worked in International Pharmaceuticals and for one of the "big four" International Consultancies. He ran a successful company for 15 years and after selling the company devotes his time to travel, science, black labradors and freedom.
Previous Unregulated, Unaccountable Corporate Megacharities Like Oxfam Are Not Fit For Purpose
Next NHS Defenders Value Ideology Over Healthcare Outcomes, But Voters Increasingly Disagree