Environmentalism in the EU

The EU has had overall responsibility for environmental concerns in the UK and other member states for almost 30 years (Treaty on European Union, Art 191).  How well has it done beyond putting up blue flags?  Has it done better than the Member States might have achieved outside the EU?

Driving around the EU over the past 20 years has been a depressing experience.  The agri-desert of Northern France has expanded relentlessly (see Europe is Facing an Ecological Disaster as Wildlife Numbers Plummet).

In Spain the whole southern half of the country has been turned to agri-desert with thousands of square kilometres of olive plantations (see Intensive Olive Farms Fingered for Water Shortages). In Southern Spain the water table is so depleted that desertification is almost inevitable.

The same methods of intensive agriculture are being used in Hungary. Twenty years ago I was shocked to find myself driving on the left in Hungary because the hedgerows and lanes looked so English. There is no possibility of making such a mistake today over much of Eastern Hungary. The EU has fostered corrupt practices in Hungary and across the EU – see New York Times: The Money Farmers – that have caused this ecological disaster. 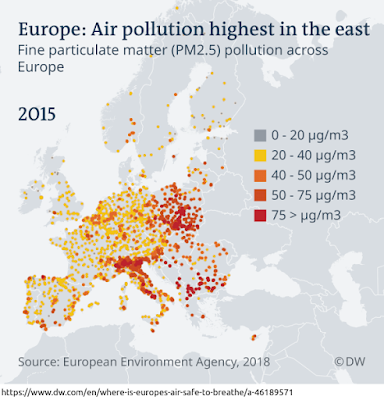 With substantial control of agriculture and the environment where was the EU? Why didn’t it stop intensive farming and depopulation of the southern half of Spain and the destruction of field boundaries and hedges throughout Europe?

EU Control of Environmental Policy is most important when it comes to air pollution.  Here there is a clear villain who promoted inaction: Angela Merkel and Germany.  This Guardian article neatly summarises what has happened: Who’s the world’s leading eco-vandal? Its Angela Merkel.

In Europe, about half a million people died prematurely in 2015 due to air pollution.  The EU has had 30 years to address the problem but the Germans in particular have strong-armed other member states on the EU Council into accepting the situation (see Guardian article above).  Had it not been for the EU blocking of environmental legislation we might have had less than 100g/km CO2 in all cars by now and have been rid of the toxic particulates (PM2.5 etc).

The EU has also failed to bring water quality up to standard, despite its much vaunted Blue Flag schemes etc. In the report European Waters Assessment 2018 the EU admits that the condition of N European inland water is parlous: 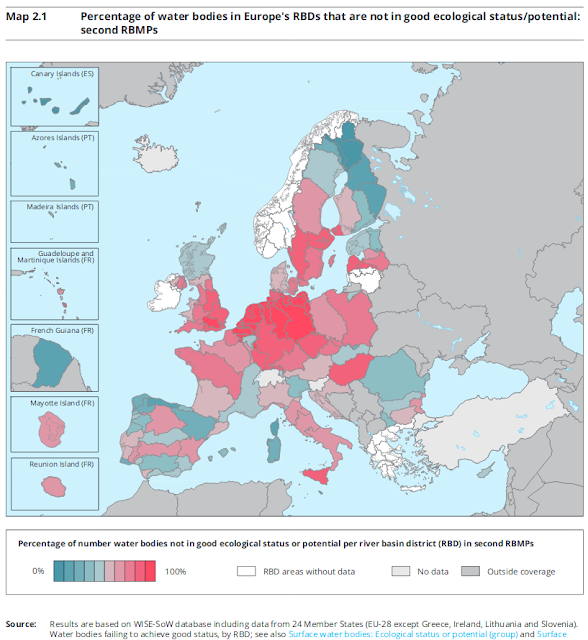 We can see that the EU is a major part of the problem of the ecological disaster sweeping Europe but we also see members of Extinction Rebellion clothing themselves in the flags of EU Nationalism at pro-EU demonstrations..

The EU can wreak damage on a continental scale.  Continental powers cause catastrophes like the Aral Sea, Chernobyl, the dust bowl, Lop Nur and Xinjiang, the destruction of the Amazon etc.

There is a deep seated problem with the EU.  The EU Commission can issue reports and make grand statements about how much it is doing and then do nothing.  We cannot hold the EU to account.

It is the failure to understand that we cannot bring the EU to account that allows a person to be an EU Nationalist.

This post was originally published by the author on his personal blog: http://pol-check.blogspot.com/2019/11/environmentalism-in-eu.html

Dr John Sydenham has worked in International Pharmaceuticals and for one of the "big four" International Consultancies. He ran a successful company for 15 years and after selling the company devotes his time to travel, science, black labradors and freedom.
Previous Either Boris or Remain
Next The American disease. Part four (history)