What is it that distinguishes people on the Left and people on the Right? We now have two party politics again. But what is the choice between these two parties fundamentally about? The answer can be summarised in the following way. Conservatism is about what is. Liberalism/Socialism is about what ought to be. For this reason Conservatives seek to protect what is, while the Left seeks to overturn it. Conservatives think that the fundamental structures of society that have developed over centuries should be respected and that progress should be gradual. The Left is dissatisfied with how society is at present and wishes always to change it radically, decisively and immediately. The basis for Conservatism is respect for human nature as it is. We have the society that we have because of human nature and the faults in society are due to the faults of human nature. The Left on the other hand is dissatisfied with human nature and seeks to reform it. Only in this way can it radically change a society that is grounded in human nature. 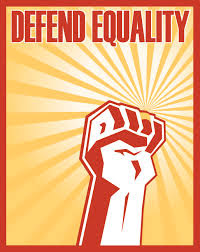 It is fundamental to human nature that we are unequal. In any primitive society you will find hierarchy. Likewise if you took one thousand modern human beings and put them on an isolated island, left them and came back after a hundred years you would find inequality. Some people are more intelligent, stronger, more ruthless or have more charismatic personalities than others. Some people are fit and healthy, beautiful and popular, others are not. Some people have skills that are uncommon and which are necessary for society others have much less to offer. Society is fundamentally unequal because people are unequal. The Right accepts this as a fact and tries to work with human nature. The Left is dissatisfied with the inequality of human nature and seeks to create a better society by means of creating a better human being.

The motto of the French Revolution, liberté égalité fraternité [liberty, equality, fraternity] involves in fact only two things not three. Equality and fraternity are obviously the same thing. It’s the same idea as found in Schiller’s “Alle Menschen werden Brüder” [All people become brothers]. At present my brother or my sister is someone in my family. I prefer this person to someone who is not in my family. But heaven on Earth or Schiller’s Elysium happens when everyone in society is equally my brother and I cease to make the distinction between family and anyone else in society.

The problem for the French and for every other revolutionary movement is that people do not want to become brothers. We wish to retain our hierarchical structure whereby I have talents, gifts or qualities that make me more successful than you. A handsome man who has his pick of pretty women, does not wish to become equal with those who don’t. If my skill at fishing means that I can catch one hundred fish why should I give most of them to the person who has no skill at fishing or who is lazy and who catches none? It is for this reason that the motto of the French Revolution involves a contradiction. It is only possible to achieve equality/fraternity through compulsion. But what is compulsion other than loss of liberty?

It is not accidental that the French Revolution or the Russian Revolution or the Chinese Revolution led to terror. It is a feature. The attempt to eradicate inequality and create a utopian brotherhood of man will always involve those who are more talented, stronger and intelligent being forced to share with those who are less talented, weaker and unintelligent. Some may choose to share, but the majority will not. It is human nature to seek advantage for yourself and your family. Human nature as it is will never lead to utopia. The Left therefore has to force us to be free and force us to be equal.

This means that we are faced with an either/or situation. Either freedom or equality you cannot have both. If we believe in allowing people to live as they please with as little interference as possible from government we will have maximum inequality, but we will also have maximum freedom. I can then earn what I am able and spend it as I please. Other people are inevitably going to do either better than me or worse than me.

Perfect equality can only be achieved by a perfect loss of liberty. But even those who don’t want to go the whole way and achieve a socialist brotherhood of man must accept that what they are doing involves people losing their freedom. If people are completely free and left alone they will naturally form a hierarchy based on talent. But the Left, dissatisfied with human nature, will try to mitigate this. Even if the Left doesn’t want to create perfect equality it still wants to create imperfect equality, i.e. more equality than would otherwise arise. But this can only be achieved by loss of freedom. My freedom to earn what I please and spend as I please, must be curtailed because I am forced to share what I would otherwise keep. Even an imperfect level of equality can only arise by forcing me to act differently to the way I would naturally choose. The attempt to create a society that is contrary to human nature, i.e. a more equal society, can only be done by creating a society that is less free. Every step on the way to equality is a step away from freedom.

In a democracy the poor may vote to take money from the rich in order to make their situation more equal with that of the rich. The rich may be outvoted and laws created that force the rich to give a large proportion of their money to the poor. This may be described as fair. But it obviously involves compulsion. What if the rich decide to take their wealth and their talents elsewhere? If enough of the rich do this then clearly the Left’s utopian project to change human nature will fail because it requires the contribution of the talented. The Left’s response to people trying to take their money elsewhere is usually to prevent either the people or the money leaving. The Iron curtain was not an accident, rather it was the condition for the possibility of eradicating inequality. You can only make people equal by forcing them to stay.

There is a sliding scale between freedom and equality. Peak equality requires complete loss of freedom. Here we have revolutionary forms of communism. But those ideas of the Left such as social democracy or democratic socialism also require loss of freedom. They don’t require as much loss as communism, but this is only because they don’t achieve as much equality as communism does.

The Left argues that what is important is equality. There is in the West a fetish about equality. Whenever something is found to be unequal it is condemned. How dare some newsreaders earn more than other newsreaders? How dare some people have the right to do something that others do not? Equality is such now that “men” must be allowed to have children and choice must neither be limited by reality nor by nature. Everyone can be what he or she wants himself or herself to be and words must mean what I choose that they mean. The lame walk, the blind see, a man can marry a man and then give birth. All of these miracles are because all must bow down to the god/goddess equality.

The folly is that the Conservative Party far from defending the essence of Conservatism has been striving to do the Left’s job for it. The Conservative view ought to be simply that inequality is a function of human existence. A man cannot marry a man for the simple reason that he is a man. A man cannot give birth because he is not a woman. This is what these words means. This is the human nature that is the bedrock on which we build the foundation of our society. Alternatively we overthrow our society by overthrowing the meaning of ordinary words. “Man”, “Woman”, “marry” are words with clear meanings that reflect a clear reality. A man cannot become a woman any more than he can become a Martian or a dog. We may pretend that this man is a woman, but in reality the word we are looking for is “Eunuch”. The demand for equality, the demand to be able to do what our nature forbids, does not change the reality, but it may distort it. It may mean that we lose sight of what is real, because we end up lacking the words to describe it.

This is how the Left seeks to reform human nature. A Conservative who goes along with this or seeks to lend a hand is quite simply not a Conservative. He is in the wrong party and should leave.

Some people are paid more because they are more popular, more talented, or more beautiful. The only way to change this is if people become less free. Conservatives should become the champions of freedom and point out that the fundamental idea of Labour and any other left-wing party is to take away our freedom to be as we please. Instead absurdly the Conservative Party seeks to imitate the ideas of the Left rather than champion the ideas of the Right. Given a choice most people prefer to be free. Most people prefer freedom to equality. It is for this reason that the Left requires walls to maintain its equality.

Freedom is an attractive idea. All human beings naturally want to be free to live as they please and to be as successful as their talents allow. This is the essence of being an individual rather than part of a socialist collective. Equality can only be achieved at the expense of my individuality being dissolved into the brotherhood. This is called levelling whereby what distinguishes me is erased because it creates difference. But difference is what makes me the individual that I am. Equality in striving to minimise difference ends up minimising me. It is for this reason that Left in the end always ceases to care about the individual and the freedom of each individual. This is not accidental. It is rather a feature of all Left-wing thinking. It is the mentality of the hive rather than the mentality of the freedom loving individual. There is nothing attractive for individuals in being forced to become worker drones.

For this reason it is high time that Conservatives argued for Conservative ideas and pointed out that equality can only come about through compulsion. You might think it is a fine idea to compel the rich to give up what he has earned through his talent, his skill and his good luck, but if you go down that route you will eventually find someone has taken away your freedom too.

This post was originally published by the author on her personal blog: http://effiedeans.blogspot.com/2017/07/equality-or-freedom.html

Effie Deans is a pro UK blogger who works at the University of Aberdeen. She spent many years living in Russia and the Soviet Union, but came home to Scotland so as to enjoy living in a multi-party democracy! When not occupied with Scottish politics she writes fiction and thinks about theology, philosophy and Russian literature.
Previous Weekly Globe Episode 10 #podcast
Next The Case for No Deal