These figures are shocking.  The figures for racial harassment are just as bad. See Second European Union Minorities and Discrimination Survey: Being Black in the EU.

The exceptional nature of the UK within the EU has been noted by the United Nations Committee on Protection against Racial Discrimination in Europe which praised the UK: “It is noteworthy that this State party’s equality legislation has been welcomed by the Committee on a number of previous occasions and that it was the first of its kind among EU Member States, dating back to 1976 (and its predecessor to 1967)”

The UN Committee criticised the Czechs, Latvians, Cypriots, Austrians, Greeks, and Slovenes for a lack of legislation against discrimination and criticised numerous States from Belgium to Poland for Apartheid style provision for minorities such as the Roma.

The rise of Far Right political parties in the EU has been incorrectly reported by the broadcast media in the UK who seek to give the general impression that they are like the Brexit Party.  The EU Far Right are nothing like the Brexit Party.  They are truly Far Right, like the BNP, and now they do not believe in leaving the EU. They want a Far Right EU.  Popular parties like National Rally in France have clear links to Generation Identity, a group that believes in intimidating and repatriating migrants.

Why do migrants queue up to get to the UK, even in the noughties enduring places like Sangatte and the “jungle” that seemed to have been deliberately created by the French to make life hard? Maybe it is fear of homelessness:

Possibly it is fear of discrimination: 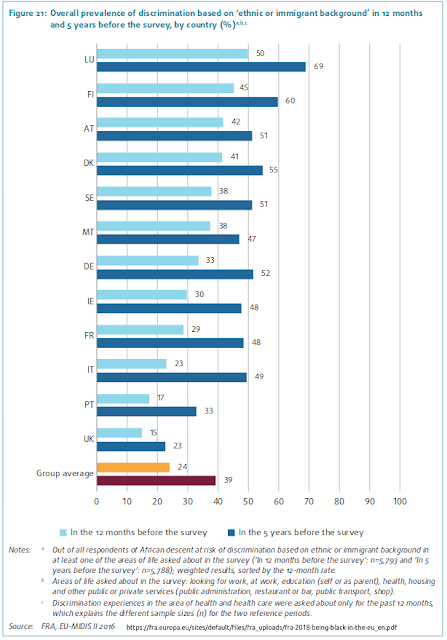 Or perhaps it is because they are three times more likely to be stopped by the police in France as in the UK.  The journalists in the broadcast media have recoiled from the criticism of our EU neighbours and have covered places like Sangatte as the product of the evil UK immigration system, they have done this despite the fact that many white English people love France and have moved there.  The inconsistency between black people fleeing France and white people regarding France as paradise seems to have been lost on our biased journalists.

So you voted Remain and think you are an anti-racist.  Did you never hear the saying about the “road to hell..”? Perhaps the problem lies in the fact that many Remain voters are middle class racists who love the EU because they think it will abolish the differences between people.

What are the current chances of Marine Le Pen, head of the National Rally Party, becoming President of France in 2022?  Support for Le Pen is growing and opinion polls have Macron and Le Pen neck and neck for the first round of voting. At present Macron has a lead of 14% for the second round (in 2017 this was a 33% lead).  National Rally is going to be the strong second party in France within a decade and may be in power within two decades.

This post was originally published by the author on his personal blog: http://pol-check.blogspot.com/2019/07/eu-racism-is-far-worse-than-uk.html

Dr John Sydenham has worked in International Pharmaceuticals and for one of the "big four" International Consultancies. He ran a successful company for 15 years and after selling the company devotes his time to travel, science, black labradors and freedom.
Previous Is it worth writing about politics?
Next Pride Before The Fall: What Woke Capitalism Tells Us About Power In Modern Society