The UK trades with the EU at an enormous deficit.  The UK also has a huge deficit in the payment of profits, rents and dividends to the EU.  The combination of the deficits in trade and financial transactions has led to a very large balance of payments current account deficit with the EU of £119 billion in 2019.  It will be shown below that this deficit is dangerous for the long term health of the UK economy and suggestions are made for any trade deal with the EU.

Before proceeding further it should be made clear that the large trade deficit with the EU is not due to a failure of UK exporters.  It is due to the steady acquisition of UK companies by EU owners (25% of UK production value is EU owned) and the ease with which parts etc. can be imported from the EU by EU companies.

Should we be worried about such a huge deficit?  The deficit with the EU is real and is financed by a trade surplus of £24 billion with non-EU countries and through borrowing by UK banks and companies.

Dekle et al summarised the effect of these deficits succinctly for the case of the USA:

”According to our static analysis, the main welfare cost of eliminating the current account deficit is simply the loss of the free lunch, i.e. the loss of goods that we currently consume but do not pay for until later. That cost is on the order of six percent of GDP.” UNBALANCED TRADE Robert Dekle et al

In other words the deficit is paid for by our children.

The effect of a continuing deficit is worse than a one off deficit because as the indebtedness of a country increases its creditworthiness decreases so there comes a moment of reckoning when it suddenly becomes very difficult to borrow money except at very high interest rates.  The UK is not in this position at the moment but if it continues to have a current account deficit of about £80 billion a year for another decade it will be on the edge of a sudden economic collapse.  As can be seen below, the current account deficit with the EU is enormous. 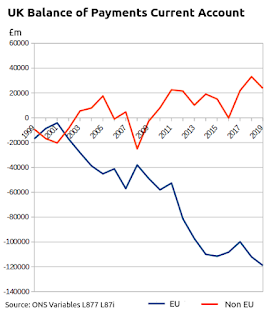 Governments that run persistent current account deficits are gambling.  The gamble is that by the time the economy collapses they will not be in government.

The total UK external debt (borrowing from overseas) is over £6 trillion: 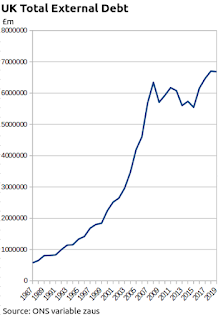 This level of debt is largely due to borrowing to pay for the current account deficit.

The external debt of the UK is very high by international standards but currently there is little risk of lenders getting nervous.  Real problems might arise in ten years time at the current rate of UK debt accumulation.  These deficits steadily devalue the currency in the long term.

Over half of the UK current account deficit with the EU is a trade deficit. 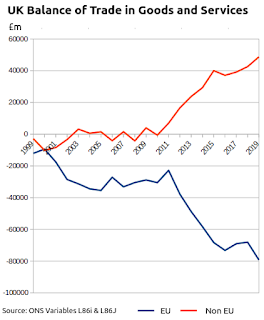 Given the parlous state of UK-EU trade the UK will need to take great care in its trade negotiations.  There is clearly the need for a “circuit breaker” to address the UK-EU deficits.

This lack of relationship between tariffs and growth should give the UK confidence in the WTO scenario for Brexit.

But what of the various predictions for disaster if the UK leaves the EU on WTO terms?  These predictions were based on “gravity models” and used GDP rather than GDP per head as the measure of the effect of a WTO Brexit.  In the excellent paper by Coutts et al 2018, “How the economics profession got it wrong on Brexit” a group of Remain voting, Cambridge University economists investigated how so many of the predictions for 2016 onward have been wrong.  The most important finding of these economists was that there were flaws in both the application of gravity model results to a Brexit context and in the knock-on impacts from trade to  productivity.  The  flaws  always  had  the  result  of  exaggerating  the negative impact of Brexit.

The Treasury gravity model approach  involved  analysing  trade  flows  between  around  120  countries  over  a  65-year period and estimating an equation relating bilateral trade to the size of the two economies  in  each  trade  pair,  their  distance  apart  and  other  factors  such  as  a  common  language. This produced a gravity equation that was used to determine the effects of proximity to trade.  The effect was highly positive over the whole EU but the Treasury missed the fact that the UK was an outlier.  In the case of the UK the effect of proximity was negative.  The punch line of the re-evaluation of the gravity models by the author was:

“The  UK  is  the  only  EU  state,  other  than  Malta,  which  exports more to non-EU countries than to other EU member states. UK exports of goods to the EU have usually been well below the levels predicted by these gravity model equations. Instead of the Treasury’s average impact [of EU membership] across all 28 EU  member  states  of  around  115%  extra  trade,  the  increase  in  the  UK  alone  appears  to  be  much  lower,  in  the  range  20-25%.”

Once the correct figures are used for the effects of proximity on the trade in goods, and modern data on the effect of proximity on services are included, Coutts et al 2018 predict a 2-5% decrease in international trade with a WTO Brexit.  We would expect domestic substitution for these losses and also acquisition of goods from cheaper sources abroad.

All of this means that the UK should be sanguine about a WTO Brexit.  There is certainly no need to give up UK territory, such as the fishing grounds, to buy free trade.

This post was originally published by the author on his personal blog: https://pol-check.blogspot.com/2020/10/eu-uk-trade-negotiations.html

Dr John Sydenham has worked in International Pharmaceuticals and for one of the "big four" International Consultancies. He ran a successful company for 15 years and after selling the company devotes his time to travel, science, black labradors and freedom.
Previous What does a no deal Brexit mean for Scottish independence?
Next The SNP school of economics