People react near a military vehicle during an attempted coup in Ankara, Turkey, July 16, 2016. REUTERS/Tumay Berkin TPX IMAGES OF THE DAY

This failed military coup has achieved the awful outcome of allowing Turkey’s tin pot dictator in gestation, the despicable President Erdogan and his supporters, to pose as champions of the very democracy they are busy subverting

Nobody in their right mind usually yearns for a military coup – the violence, confusion, civilian casualties, suspension of justice, martial law and human rights abuses which occur in the best of times are nothing to welcome, no matter how odious the status quo.

But once it became clear that a military coup was underway in Turkey, involving at least a subset of the military, it were better for that coup to succeed with as little bloodshed as possible than to have it fail.

Why? Because if you thought President Recep Tayyip Erdoğan was bad before, just wait until paranoid, vengeful President Erdogan 2.0 is unleashed once he has finished putting down the coup and reasserting control over his divided country.

This is a vain and power-hungry little man who was at one desperate point last night reduced to addressing his nation via FaceTime, through an iPhone screen pointed at a television camera. He will not have taken kindly to this humiliation, and his vengeance will be swift and merciless.

President Erdogan was already well on the way to tin-pot dictator status, jailing critical journalists and political opponents, seizing control of independent critical newspapers and turning them into pro-government propaganda outlets, violently suppressing popular protests, subverting the constitution and building himself a palace fit for a king. All of this will now be accelerated.

If you thought he was a paranoid tyrant before, you ain’t seen nothing yet. Erdogan was already throwing his weight around – jailing journalists, seizing control of critical newspapers, sending riot police in to fight protests and so on. But now he has a concrete threat which he can use to justify any and all repressive measures. The odds are that we will now see even tougher clampdowns which sadly will extend will beyond those actually responsible and likely sweep up many targets whom the government finds it convenient to be rid of.

Worse still from a secular standpoint, the military’s bluff has now been called. Turkey’s military has historically served as a firewall, a last line of defence against creeping Islamism and theocratic control. While details of this coup attempt have yet to fully emerge – it may be the case that these events were plotted only by one specific subset of the military – it now appears that the military has gambled and lost. It is hard to see them serving their pro-secular role in future, especially once Erdogan has made further personnel changes, replacing the current general staff with his stooges.

This failed coup attempt is also bad news for everyone else who relies on Turkey being a moderately stable presence in the region, and a trustworthy negotiating partner. Erdogan already had the European Union over a barrel with its pants down, extorting huge sums of money from European taxpayers in exchange for taking the smallest of actions to stem the flow of migrants and refugees entering the EU via Turkey. Expect that price to go up (while Turkey’s commitment to abiding by its agreement goes down) now that Erdogan feels the need to shore up his own position.

But the truly depressing thing about this failed military coup is the fact that it allows an utterly despicable and contemptible man and his hardcore supporters to parade around like the champions of democracy when in fact they are its sworn enemies. Erdogan himself once remarked that he views democracy as akin to getting on a bus, and that once the bus reaches its destination he will get off – in other words, he will submit himself to taking part in elections until he has built up a sufficient power base, and then kill Turkish democracy in the crib so that he can never be removed.

Already in the early hours of the morning, when it appeared that the coup attempt was failing, we saw Erdogan’s supporters wrap themselves in the flag of democracy:

President Erdoğan: “I have never recognized any power over the power of the people and will never do so.”

Sadly, some in Britain who should know better – including the normally reliable Brendan O’Neill – joined in the same chorus: 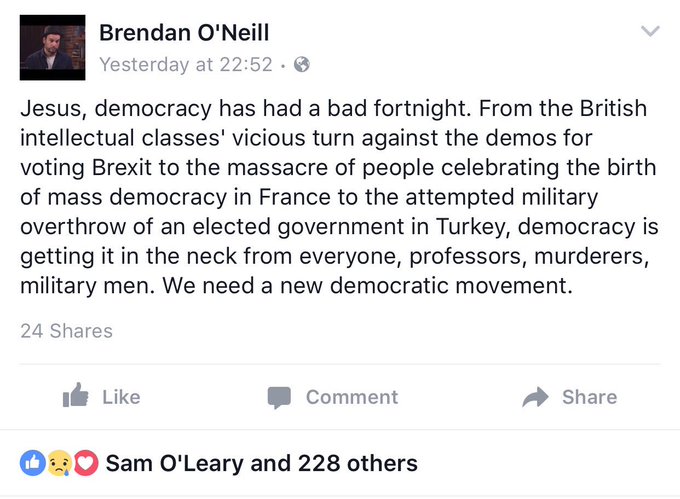 Brendan O’Neill on the new contempt for democracy.

The events cited by O’Neill – the establishment’s horror at Brexit, the Islamist terrorist slaughter of innocent people in Nice on Bastille Day and this failed coup in Turkey – are hardly comparable. While the first two do indeed represent the hatred held by some people for popular liberal democracy, President Erdogan is no great believer in liberal democracy, using it as a vehicle when it helps him but quick to suppress it when it represents a threat to his interests.

The danger is that by ennobling Erdogan’s survival by lumping it together with legitimate democratic movements (like Brexit) we help to shore up the power of somebody who is no friend of democracy, and who fully intends to snuff out democracy altogether once he has used it to drag Turkey back to some primitive, theocratic dark age.

This really is the worst of all possible outcomes. Military coups are never something to be celebrated, even when aimed at deposing someone as unpleasant as Erdogan – his defeat should come at the ballot box, not at the barrel of a tank gun. But a failed coup is doubly bad since it weakens the military, hardens Erdogan’s supporters and makes the man himself even more paranoid and authoritarian – there are already talks of Turkey reinstating the death penalty to deal with the plotters.

Whichever side had prevailed in this coup attempt, democracy would have been the nominal loser. But democracy’s defeat will be particularly bitter now that Recep Tayyip Erdoğan stands strengthened and victorious.

Postscript: The failed coup in Turkey also seems to have brought out the worst in several British politicians, notably Labour MP Chris Bryant who thought that turmoil in Turkey provided a perfect opportunity to smear Brexiteers:

Turkey is now and has long been a lynch pin in European and wider security. Ludicrous Brexit lies undoubtedly contributed to destabilising

In other words, Chris Bryant is literally blaming Brexit and the quest for British independence from ever-closer European political union for causing civil unrest in a country thousands of miles away.

“Sore loser” doesn’t even come close to describing this hysterical, childish behaviour from an elected Labour MP. So out of touch are Labour MPs with the mood of the country (and their own constituents – Chris Bryant’s constituency voted for Brexit, 54-46 per cent) that even now they are sulking and taking part in a tantrum, lashing out at the British people for having the temerity to ignore their doom-laden advice and drag them away from their beloved EU.

The next time you hear it said that the Corbynites are rendering the Labour Party unelectable, remember that it was the centrist Chris Bryant acting like a moronic child on social media while civilians were being killed in Turkey.

This post was originally published by the author 16 July 2016 https://semipartisansam.com/2016/07/16/a-failed-military-coup-in-turkey-is-the-worst-possible-outcome-for-democracy/

Sam Hooper is a former management consultant turned political commentator, currently living in London with his Texan wife. Sam can usually be found somewhere online, droning on about politics, free markets, civil liberties, classical liberalism and classical music. Sam is a proud conservatarian, blogs at http://semipartisansam.com and tweets @SamHooper.
Previous You’ve already had your independence referendum
Next The benefits of constitutional monarchy