There is currently some talk of global economic collapse being imminent. (See for instance Complex Systems Collide, Markets Crash).   The basic thesis is that interactions between the world and the economy can cause the economy to switch into a different mode of operating.

Things are looking bad at the moment. The stock markets are replaying 1929 with eerie precision:

But how bad is it? There are several weak points: most large corporations are up to their ears in debt, eurodollars are getting ever harder to obtain, eurodollars are lacking collateral, over $2 trillion of corporate bonds mature annually, the oil price is below the break even level for Russia and Saudi Arabia.

There is an interesting title to the graph below  that summarises the complacency of most of the finance industry “Global debt has grown from $97 trn to $169 trn since the crisis but has been stable relative to world GDP since 2014”: 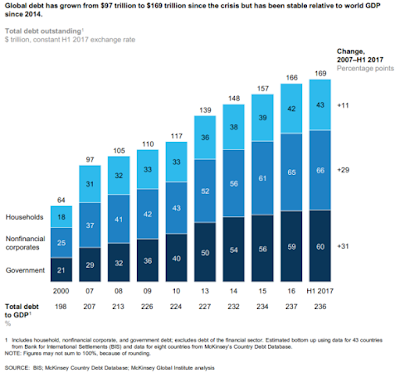 Bank balance sheets are once again in trouble as shares fall and oil prices tumble.   Banks are selling their treasury bonds to pay corporate clients and free up cash for loans to businesses hit by coronavirus.  The shortage of eurodollars dating from the financial crisis means that bank liquidity is drying up (eurodollars are dollars held outside the USA that are used for interbank loans).  The efforts by the Fed, ECB, Bank of England etc. to inject liquidity by lowering interest rates are a drop in the ocean compared with the eurodollar shortage.

The other problem is that traditional car companies are in trouble. 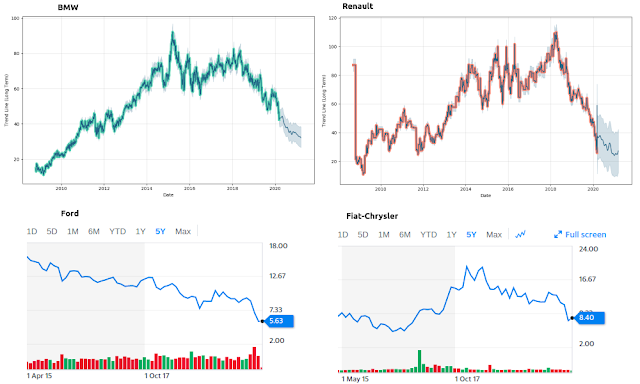 Coronavirus has merely cemented the trend due to astonishing lack of preparedness for phasing out hydrocarbon fuels. It reminds me of IBM in the 1980s saying that personal computers were just a passing fashion.

Many of these factors predate coronavirus.  Coronavirus is a Black Swan that is precipitating trouble that was already in the pipeline. But will the global economy crash?

A major global crash would require the simultaneous failure of bank liquidity coupled with the failure of several major Multinational Corporations.  Governments tend to back their big banks and prestige corporations so it is doubtful they will fall.  However, the price of supporting our profligate banks and dozy corporations is high for each of us. As in the 2008 recession it will be our wages that take a hit.

The UK is lucky because BA, Virgin, Tesco, HSBC are strong brands and so may return the cost of their support.  The EU is less fortunate because they will be propping up heavy industrials such as BMW that may lose value permanently.  The EU is also threatened by the weak fringe from Ireland southwards through the Mediterranean.  Whether the ECB can raise the cash to support half the EU is a moot point, especially given the poor state of the German economy.  As Eurozone members these fringe countries cannot take effective independent action and must be supported.

Perhaps the biggest problem is the Eurodollar market.  This is used for inter-bank lending and is outside the control of any central bank, it is “offshore” money.  How we got a financial system that is ultimately dependent on deals between banks with little possibility of intervention from nation states is a mystery but it has happened. When one bank lends eurodollars to another the lender checks to see if the recipient has collateral.  The recipient prints out details of all the eurodollar loans that it has made to other corporations and banks.  The acute reader may have spotted that there could be a problem: where is the REAL collateral?  Eurodollars are collateral for eurodollars.  It would only need banks to ask for less than 100% collateral for each loan for the system to race out of control.

What do traders say? A quote: “Now let me just mention that due to the high liquidity in the eurodollar market many of the transactions aren’t necessarily collateralized.” The Eurodollar market between “gilt edged” banks can happen without adequate collateral.  Of course, once you have fooled a Bank into giving you a Eurodollar loan you can lend this to create Eurodollar collateral to get more loans.. This all seems to have happened leading up to 2008.  The basic problems of 2008 have not been resolved.

What would happen if the banking system just created far too much money?  The stock exchange would rise and rise, “A” and even “B” rated government bond interest rates would fall and fall.  This is what happened leading up to 2008.  During and after 2008 the problem was too little liquidity.  The Central Banks had to inject cash.   Inflation would rocket unless canny central banks and banks in general restricted the distribution of money to large corporations, institutions and banks, using QE and related techniques to keep the cash away from you and me.

2008 was a shock for the banks and, maybe, made them realise the importance of real collateral.  Unfortunately there is little of this to be had and the bad habits seem to have returned very soon after 2008. In 2019

The only difference from 2007 is that now the banks are very skittish about lending and if crisis threatens will want to see some real collateral. Interbank lending can collapse very easily.  It is also doubtful that the US will meet the funding needs of non-US banks by doing dollar swaps this time around.

Governments can intervene until people lose faith in national balance sheets so that the governments cannot prop up the crazy system.  Global collapse would occur if a sufficient number of countries fail. The Multinational Corporations and Banks, which are the prime recipients of all this monetary largess depend on international trading and will fail if sufficient countries fail.  The silver lining is that government bonds have very low interest rates which makes intervention feasible.  It is possible that the world has discovered a stable way of diverting wealth into the pockets of the Oligarchs that run Multinationals and International Banks.  Global collapse will happen if there are a number of sovereign debt crises in the next year or two.  We shall see..

Gold is falling slightly because lots of banks, corporations and people need cash, urgently.  It may rise next year if the stimulus by central banks is effective at halting the rout elsewhere but there is a nagging suspicion that too much money was also chasing gold. 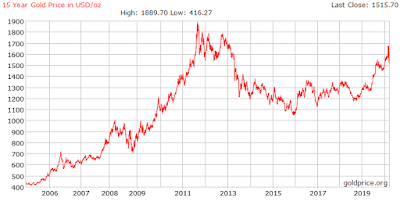 So, there are interesting times ahead…

This post was originally published by the author on his personal blog: https://pol-check.blogspot.com/2020/03/global-collapse-how-likely.html

Dr John Sydenham has worked in International Pharmaceuticals and for one of the "big four" International Consultancies. He ran a successful company for 15 years and after selling the company devotes his time to travel, science, black labradors and freedom.
Previous Time to cease fiddling
Next Rishi Sunak just killed Scottish nationalism