Those who follow economics now know that the economic “experts” were wrong about their predictions for the period between the Referendum and today.  This has scarcely been covered by broadcasters and this lack of coverage has left many Remain voters believing that an economic disaster is imminent.  The absence of any coverage of the “experts” being wrong has seriously divided our society, with Remain voters feeling they were robbed rather than wrong. 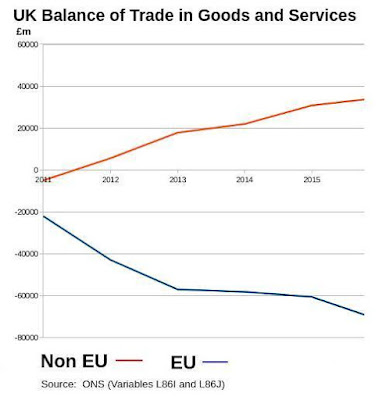 It is simple, as are the consequences:

In developed economies trade deficits are the result of government policy.  Governments can impose tariffs, hinder exchange, purchase foreign currency etc. etc. to modulate the Trade Deficit or Surplus. The huge UK trade imbalance with the Eurozone is a result of the political decision to be in the Single Market.  See The Eurozone Trojan Horse. We have 3 choices: Austerity, High Taxes or Leave Single Market.  Austerity is indeed awful and raising taxes above about 40 to 45% of GDP always causes private industry to falter.  The third option is obviously the best.

Economists should have learnt the Sectoral Balances Equation at school, let alone at university!  That they are not telling everyone about this problem suggests that they have sold out.  It is easy to imagine the economists at the LSE, OECD etc producing reports that suppress coverage of the UK-EU Trade Deficit because these economists are paid for their research by organisations that are opposed to Brexit.  Why economics journalists refuse to cover the Trade Deficit is a mystery, surely they have not been bribed or nobbled by management at the BBC etc?

Dr John Sydenham has worked in International Pharmaceuticals and for one of the "big four" International Consultancies. He ran a successful company for 15 years and after selling the company devotes his time to travel, science, black labradors and freedom.
Previous Are Technocrats To Blame For The Rise Of The Know-Nothing Celebrity Politician?
Next Globe on the Weekends #podcast: An interview with Alex Illingworth