How Old is Humanity?

Discussions of the antiquity of Homo Sapiens provide an interesting insight into our post-modern, post-Marxist times.

Neanderthals seem to have been quite clever, they were capable of using fire to extract resins and could make and mount flint spear heads securely on wood. Both these tasks would severely test any modern man in the street.

So two questions emerge: why is there such attachment to the 60,000 year date for the genesis of Homo Sapiens and why have palaeontologists got in such a fluster about whether Neanderthals were truly a different species?

The first question is easy to answer, a 60,000 year “Out of Africa” history for humans gives media people a warm feeling of righteousness: “we are all Africans”.   Well, it still looks highly probable that Homo Sapiens evolved in Africa but the date is so far back that the warm feeling looks stupid. Indeed any political feelings about palaeontology are obviously stupid and should be excised from the field. 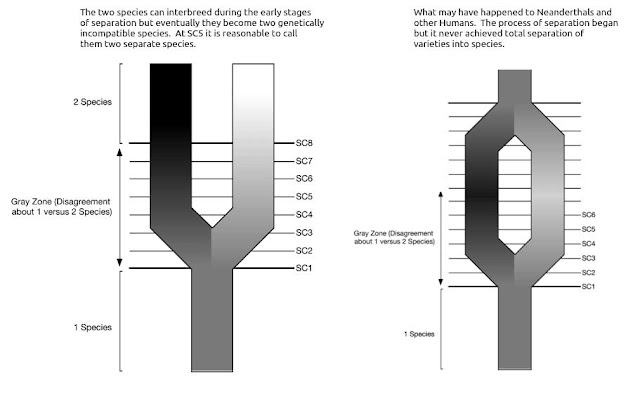 What seems to have happened is that there was a period of partial separate development between Neanderthals and proto-humans between about 600,000 and 100,000 years ago.  There is no need to invent new definitions of “species” for such occurrences as some palaeontologists are now doing.

All this is fairly straightforward so why are people getting emotionally exercised about it?  I was amazed by the enthusiasm of the post-modern media for the “Out of Africa” hypothesis.  Whether it happened 60,000 years ago or not should not really mean anything to any of us at an emotional level.  If you were genuinely not racist you would simply be interested in the origins of Humans, to invest an event with modern political significance that was thousands of generations in the past verges on the insane.  It is interesting that the last people who tried to separate humans into separate species, the “Scientific Racists” are now in disrepute:

My guess is that the science will stabilise with the earliest humans evolving 600,000 to 1 million years ago which allows them to have gone out of Africa, returned, gone out again, interbred etc. etc.

So what is going on?  There is no doubt that modern humans do not even have sufficient genetic or phenotypic diversity to contain a “variety”, let alone a sub-species.  “Race” is used to exaggerate the differences between people.  So why are post-modern journalists etc. so keen to talk of palaeontology in racist terms?  Their desire is to stoke up current racial conflict rather than to explain what actually happened in the past.  A decent, fair person would talk of “out of Africa” in terms of the richness of the African environment and its stability in the face of ice ages making it a good place for human evolution, we are all humans so this is of passing interest, however, a malevolent journalist would state “We are all Africans now!”.  Telling a white racist that they are “really” black is totally unhelpful and deliberately divisive.  It also gets all the idiots into difficulties if “Out of Africa” is found to be false in some way.  We are not really black or really white, we are really human.

A note on Eve

DNA occurs in the cell nucleus (nuclear DNA) and also in mitochondria, the tiny energy generators in our cells.  As far as is known, all modern humans have mitochondrial DNA that came out of Africa no more than about 60,000 years ago.  Mitochondrial DNA is passed on by mothers to their children, hence the idea that all humans came from a primeval, African Eve.

If it is true that all modern humans have Eve’s mitochondrial DNA then this must have been of huge selective advantage.  We can guess that Eve’s mitochondria permitted enhanced resistance to infection.  What moved out of Africa was a mutation that probably spread by intermarriage (it takes about 30,000 years for a genetic trait to spread from Africa to the tip of South America by diffusion) and greatly enhanced the survival of offspring.  Although we all carry Eve’s mitochondrial DNA her nuclear DNA is diluted thousands of times in all of us, being mixed with Human (and Neanderthal) nuclear DNA in general.

This post was originally published by the author on his personal blog: http://pol-check.blogspot.com/2018/05/how-old-is-humanity.html

Dr John Sydenham has worked in International Pharmaceuticals and for one of the "big four" International Consultancies. He ran a successful company for 15 years and after selling the company devotes his time to travel, science, black labradors and freedom.
Previous The Christian Duty to Defend Democracy
Next A man has to be what he is