How to maximise the Pro UK vote in Scotland

It’s important to understand how the Scottish Parliament election system works to find the best way to defeat the SNP and other pro-independence parties such as the Scottish Greens and Alba.

The latest poll is as follows

The SNP has had around a 20% lead for months, often more. The Pro UK parties are at about the same level of support they were in 2016 when we last had an election for the Scottish Parliament.

The campaign may change these percentages slightly, but it is highly unlikely that the SNP will lose 20 points or that Labour, the Conservatives or the Lib Dems will gain 20 points.

As things stand the SNP will win nearly all the constituency seats, because the pro-independence vote in the constituencies is united while the pro UK vote is divided by three. One is always going to beat one third.

There are 73 constituency seats. In 2016 the results were as follows:

The Conservatives and Lib Dems benefit from there being parts of Scotland where they are strong enough to overcome the SNP’s overall percentage lead. Labour struggle because the regions where it was traditionally strong have gone over to the SNP.

It is impossible for the Conservatives, Labour and Lib Dems to do much better if they each choose to stand in every constituency. The result will be much the same as last time. There might be the odd upset. But the SNP will still win almost all the constituencies and be close to the point of winning the 65 seats needed for a majority.

So long as each party polls at a similar percentage to now, the election can be repeated over and over, and it will still end up with the SNP winning though it might only get around 40% of the vote.

For Labour, the Lib Dems and the Conservatives to keep repeating this strategy is to give up the chance of winning. Labour won 21 list seats in 2016, the Conservatives won 24 and the Lib Dems only 1. But the list seats are the consolation prize for those who do poorly in the constituencies. It would never be possible to beat the SNP without defeating them in the constituencies. To focus a campaign on winning list seats is to admit that you will never form a government and your leader will never be First Minister. But there is an alternative.

The number of constituency votes in 2016 was as follows

This means that the combined Pro UK vote was 1,194343 which is a bigger number that 1,059,898. The SNP won 59 constituencies versus Pro UK parties winning 14 even though there were more Pro UK votes than SNP votes. This is what dividing your forces in the face of the enemy does to you.

One solution to the problem would be to have a single Pro UK party. In the absence of this the only other solution is Pro UK people to vote for the Pro UK party that has the best chance of winning in each constituency.

Unfortunately, tactical voting campaigns have had limited success over the years. By far the best way to make Pro UK voters choose the party most likely to defeat the SNP is for the two others to stand down in each constituency. Not every Pro UK voter would be willing to back the Conservatives, Labour or the Lib Dems, but many more would if the only alternative was the SNP.

This is not a game as Anas Sarwar suggests. Rather it is the only way to compete. Sarwar’s strategy is to give up and not even take part.

This is the most important part of the campaign. Unless Pro UK voters choose the party most likely to beat the SNP in each constituency, we will have no chance of defeating them. 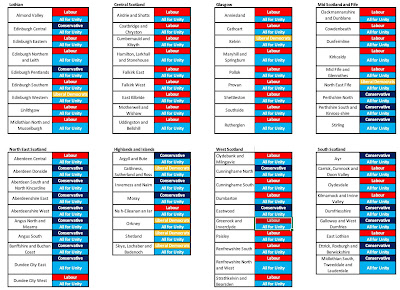 In 2016 the SNP won only 4 list seats, because in most regions it won too many constituencies to have a chance on the list.

To arrive at the who wins a list seat it may be best to look at the regional votes from 2016.  In that election a party that came fourth or sometimes fifth could pick up a list seats with relatively few votes. The Greens won a list seat in Mid Scotland and Fife with only 17,860 votes.

It becomes clear that a party that wins between 17,000 and 25,000 votes in the list has a chance of winning a seat. But it only has that chance if it does not win a constituency. It is for this reason that it is worth having a list only party. Any party that wins a constituency has that much less chance of winning a list seat. For example, the SNP won 111,000 votes in the Glasgow region in 2016 but won no list seats because it won all nine constituency seats.

This means that in every region where either Labour, the Lib Dems or the Conservatives win a seat it would be advantageous if Pro UK people voted for All for Unity because as a list only party it won’t be hindered in the calculation of the list seats by its having won a constituency. It is only standing in the list seats.

There has been some debate between Pro UK people on the best way to maximise the number of Pro UK list seats. I don’t believe that it is possible to know for certain prior to the election, because how well a strategy works depends on how many votes a party gets. We also don’t know what affect Alba will have on either the Green vote or on anyone else’s vote in the list.

But it is perfectly possible for All for Unity to get more than 17,000 votes in a region and at that level it will begin to win list seats. The more list seats All for Unity wins, the more likely Labour, the Lib Dems and Conservatives will see that working together is beneficial. At that point we may begin to move to people thinking about putting forward a single Pro UK party.

The strategy can be summed up as follows.

1 Vote for the Pro UK party with the best chance of winning in the Constituency.

2 Vote for a different Pro UK party in the list.

If you disagree with my final recommendation that’s OK, but it will be advantageous if you are voting in a constituency where the Lib Dems are likely to win that you vote for a different Pro UK party with the list vote. For instance if you live in the Highlands and Islands where the Lib Dems won two constituencies, you are simply wasting your list vote if you give it to the Lib Dems, because they won’t win any list seats having won two constituencies. Better by far to vote for Labour, the Conservatives or as I suggest All for Unity.

In the South of Scotland in 2016 the Conservatives won 100,753 list votes but won only two list seats because it had already won four constituencies. Those Conservative list votes would have gained more seats if they had gone to a party that was not competing in the constituencies. After Labour won the East Lothian constituency in 2016 and the Lib Dems have previously won Roxburgh and Berwickshire. It is not knowing who will win a constituency that makes a list only party, All for Unity the best way to maximise the Pro UK list vote.

There are different ideas about tactics, just as we all support different parties, but don’t let’s squabble about it. The most important thing is to use our votes cleverly by rejecting the rather dumb idea of using both votes for the same party. The whole point of having two votes is to use them for different parties. Maybe if you’re a Conservative living in Glasgow you might decide to lend your first vote to Labour in the constituency but use your second vote for the Conservatives. But it would I believe be even better if you lent your second vote to All for Unity. Even a few All for Unity MSPs would massively help the cause of Pro UK people working together.

I support All for Unity, not merely because I see the logic of voting for a list only party, but because I want George Galloway, Jamie Blackett and others to be elected to the Scottish Parliament. They come from opposite sides of the political spectrum, voted Leave and Remain, but work together and would be more effective opponents to the SNP than most of the present Pro UK MSPs.

All for Unity is getting minimal coverage from the press and TV, but a grass roots campaign is still capable of being successful. The only alternative strategy is essentially defeatist. It involves doing what we did in 2016. But that failed. Let us at least try something different. We have the votes to defeat the SNP. If we use them cleverly we can topple Nicola Sturgeon.

This post was originally published by the author on her personal blog: https://www.effiedeans.com/2021/03/how-to-maximise-pro-uk-vote-in-scotland.html

Effie Deans is a pro UK blogger who works at the University of Aberdeen. She spent many years living in Russia and the Soviet Union, but came home to Scotland so as to enjoy living in a multi-party democracy! When not occupied with Scottish politics she writes fiction and thinks about theology, philosophy and Russian literature.
Previous Daily Globe at the Weekend – The CANZUK podcast Episode 6
Next Leaders and LARPers