IMF and Treasury Predicted WTO Brexit will be Fine!

The IMF and Treasury produced reports in 2016 that closely analysed the UK and international economy.  The results of these reports should be read by everyone who is opposed to a No Deal Brexit.

The IMF Country Report 16 on the United Kindom has this graph on p31 showing the process of Brexit. 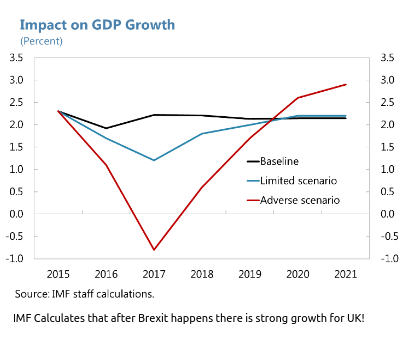 Fortunately the disastrous recession that the IMF predicted for 2017 did not happen.

Notice that in the “Adverse Scenario” – the No Deal Scenario – the IMF calculated good growth after Brexit actually happens.

The HM Treasury Analysis: The immediate economic impact of leaving the EU has a similar outlook to the IMF:

Notice that neither of these documents predicted a disaster after the UK actually leaves the EU.  In fact the IMF predicted good growth.

Of course, we now know that both of these documents were entirely incorrect. They do provide a good test of how indoctrinated you are.  Both documents are crystal clear that their predictions apply to the period between the referendum and actual Brexit.  If you are shrugging your shoulders and believing that the predictions actually applied to after Brexit happens you are beyond doubt indoctrinated because the documents predict that growth is good after Brexit happens.  The “disaster” is at the start of the Article 50 process. Take a look at the graphs above.  Or read Osborne’s introduction:

The 2016 predictions were for the period before Brexit happens. They were explicitly about uncertainty caused by the Referendum, an uncertainty that is cleared up by Brexit actually happening.

If you believe that the Bank of England rescued the economy in 2017 by printing money then firstly you should ask why the Treasury did not factor such a simple intervention into their predictions, secondly you should wonder why we ever have recessions if we can just print our way out and lastly both the IMF and Treasury predict a recovery just before and after a WTO Brexit (No Deal).  They do not predict that Brexit itself will cause an economic apocalypse.  They explicitly predict that as we get to actually leaving the EU we have little to worry about.

The graph above is a refresher of what actually happened after the Referendum – very little! Certainly no recession.

In summary: the IMF and Treasury produced reports in 2016 that clearly predicted a major recession after the referendum. This did not happen.  They clearly predicted that Brexit itself is almost harmless to the UK economy so they cannot be interpreted by saying that we are just waiting for the predictions to happen after Brexit. The predictions for AFTER Brexit are fine.

OK, the predictions described above are what is known as Project Fear Mk1. In Project Fear Mk1 the Treasury and its International pals attempted to terrify the population into voting Remain in the EU Referendum.  I am sure they believed that their bluff would never be called and the UK would vote Remain. Once they had lost the Referendum they changed their predictions entirely within 6 months so that they would not be a laughing stock.

However, even though the IMF and Treasury predictions were badly wrong the broadcast media have scarcely covered this story of the “experts” being wrong about the EU Referendum.  This has encouraged the Treasury to have another go at Project Fear:  Project Fear Mk2.

In 2016 the IMF, Treasury, Price Waterhouse Coopers and all the other pundits were saying that actually leaving the EU would have little effect on the economy (see graphs above).  They were addressing the immediate problem of how to stop us voting to leave in the Referendum by threatening an immediate catastrophe, a catastrophe that did not happen.

Now that we have actually got to the moment when we should be leaving the EU they are relying on two factors to fool you again: firstly the suppression of how Project Fear Mk1 was totally wrong has been incredibly successful with indoctrinated Remainers, secondly Remain Journalists and Economics Editors are such fanatical Remainers that they will not mention that the Treasury has completely blown its credibility.  You may think that “fanatical Remainers” is strong language but the failure to report the truth on such an important issue as the credibility of the Treasury on Brexit forecasting goes beyond mere bias.

Project Fear Mk2 has serious problems because none of the annual figures sound scary enough.  To generate fear the Treasury and others have had to assume that they can predict economic events accurately for 15 years.  On this basis it is possible to make a reduction in growth of, say, 0.3% a year into a large 5% loss.

That no economist can predict GDP for 15 years into the future is not allowed to spoil a good story and confounding factors such as changes in population growth are just glossed over.  This is the imaginary picture that is being used to condemn a No Deal brexit: 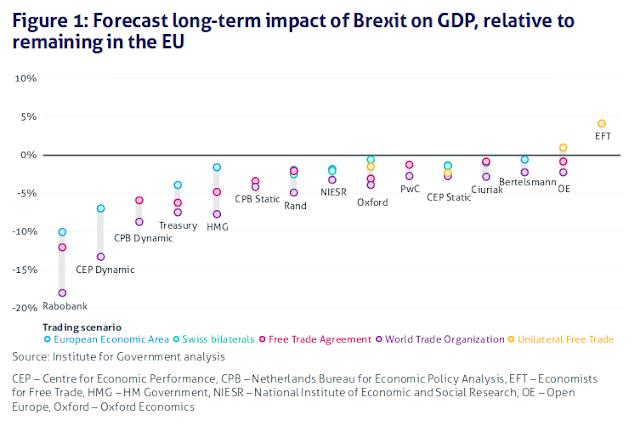 Most of the 5% imagined fall in GDP over 15 years is actually due to the population growing more slowly as the 600,000 immigrants entering the UK every year (1% of UK population) is reduced. This population effect does not make you or me poorer, fewer people earning the same is a smaller total but each person is as rich as before.

Ten of the thirteen independent, non-government economic forecasts predict that all and any versions of Brexit have less than a five percent effect on the economy over 15 years.  Less than 5% over 15 years. The use of the predictions of Rabobank – a rabidly anti-Brexit Dutch bank and the LSE CEP Dynamic model make it look like there is a small chance that No Deal Brexit could be awful.   No-one believes these sources and they are seldom quoted elsewhere. Take them out of the reckoning and the worst that can be said about No Deal is that it might slightly reduce GDP once population effects are subtracted.  Or it might not.  The predicted changes are so small at less than 0.3 per cent a year and extended over such a long period that they are absurd. (See GDP predictions are reliable only in the short term (Economist Dec 15th 2018) .

Project Fear Mk2 does not predict any major recession although the most extreme predictions have zero growth for a year or two so why MPs and the Broadcast Media are screaming that it will be an apocalypse is a mystery.

Perhaps they saw the Bank of England scenarios for a No Deal Brexit and failed to read the text accompanying the graphs that explained that they were not predictions:

So here we are. The BBC and other broadcasters are screaming that a No Deal Brexit must be avoided at all costs on the basis of no reliable economic data at all.  They are hoping that if they repeat the message enough they will make the impressionable believe it.

This post was originally published by the author on his personal blog: http://pol-check.blogspot.com/2019/06/imf-and-treasury-predict-wto-brexit.html

Dr John Sydenham has worked in International Pharmaceuticals and for one of the "big four" International Consultancies. He ran a successful company for 15 years and after selling the company devotes his time to travel, science, black labradors and freedom.
Previous It is time for Boris
Next An Indyref Romance: Harmony and Dissonance – Chapter 11