The Government has just announced a new points based immigration system where 70 points are needed to migrate to the UK (10 points for speaking English, 20 points for having a job offer etc).  10,000 places will be allocated to seasonal workers.

Sky News had this neat summary: 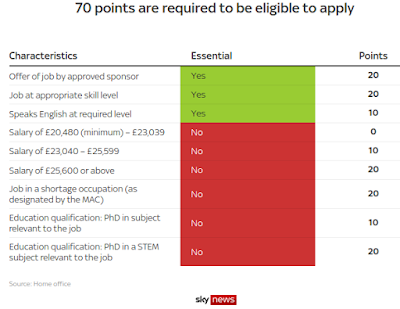 Sky has covered the new system in a matter of fact way but the BBC launched a campaign against the system on behalf of the construction industry, minimum wage employers and the Labour Party.  It should be remembered that much of the population growth that fuels house building is due to migration and that the Labour Party depends on the migrant vote. 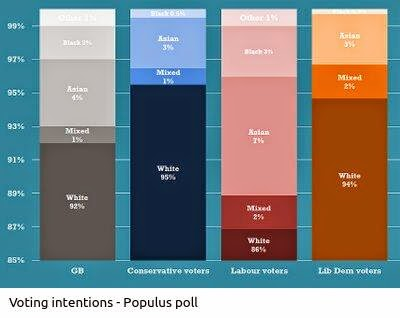 Migrants vote Labour because, like the young, they are unaware of the history of Labour largesse ending in economic disaster.  This imbalance in party support has a huge and disproportionate effect on Labour because the migrant vote is concentrated in urban constituencies whcih are traditional Labour strongholds. Over two or three generations the migrants will become fully part of our society so it is crucial for Labour to keep pouring in more voters and to maintain division. 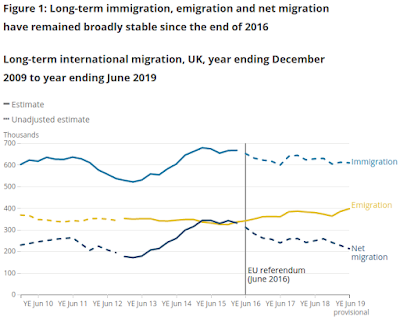 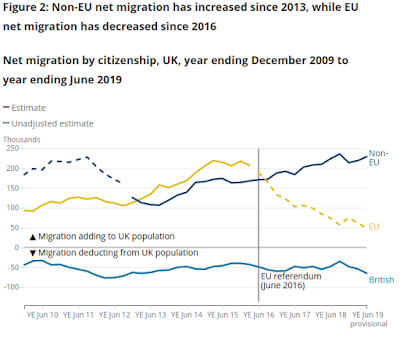 The BBC, contrary to its Charter, represents the interests of large, often Multinational companies and foreign workers against our interests.  From the viewpoint of UK citizens, the people that our government represents, the new points based system is good news.  What matters to you and I are our job opportunities and these are certain to improve if foreign labour is reduced.  It is even possible that wages will rise if true labour shortages occur although the BBC hosts pundit after pundit to tell us that wages do not depend on the supply and demand for labour. The jury is out on wages but there can be no doubt that job opportunities improve when there are labour shortages.  Lower population growth also means lower house prices which again is good news for most people but would be trumpeted by the wealthy journalists at the BBC as a disaster.

What matters to me most of all is that the new immigration policy gives our land the best chance for survival, being the first real attempt at controlling population growth in the UK. 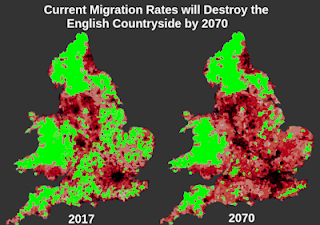 This post was originally published by the author on his personal blog: https://pol-check.blogspot.com/2020/02/immigration-net-migration-in-uk-and.html

Dr John Sydenham has worked in International Pharmaceuticals and for one of the "big four" International Consultancies. He ran a successful company for 15 years and after selling the company devotes his time to travel, science, black labradors and freedom.
Previous Neither European nor a Union
Next Why I’m not a Unionist