Impartial Journalism in a Polarised World

The BBC has recently produced a programme called “Impartial Journalism in a Polarised World”, created by James Harding, which discusses how they are being challenged by alternative sources of news.  Organisations like the BBC portray themselves as heroes battling against a tide of disinformation but how far is this the truth?  The BBC has a special role in providing impartial news because it is financed by License Fees levied on ordinary British people.

Unfortunately the BBC had to serve as a propaganda weapon during WWII and the Cold War.  The tool that it used was not Fake News but News Suppression.  In WWII the principled journalist, George Orwell, resigned from the BBC largely because of this suppression of news. News suppression works by excluding events and views that might encourage opponents and by excluding the context of events.

There is substantial evidence that the BBC is still using News Suppression.  The most famous recent example is prior to the EU Referendum.  The IEA Report: In Focus, the case for privatising the BBC  identified “Bias by Omission” as a major form of bias practised by the BBC. Of 4275 guests invited to speak about the EU between 2004 and 2015 on the flagship Radio 4 Today Program only 132 supported leaving the EU (3.2%) One third of the pro-withdrawal speakership was repeat appearances by Nigel Farage!

This bias by omission still continues.  The Brexit Party, which won 29 of the 73 seats in the EU elections, has been assigned almost no time at all on programs such as Radio 4 Today or the BBC News except if it has made a political mistake.  The BBC also gave almost no time at all to the dismissal of the court case against Boris Johnson for the “Brexit Bus” and it failed entirely to mention that even the prosecution grudgingly admitted that in their opinion the £350m might have been valid had it mentioned that it was a gross figure. 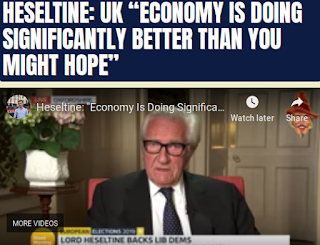 BBC viewers and listeners will be entirely in the dark about the fact that the European Movement was behind the StrongerIn campaign.  Indeed the Brexit battle is a battle between the European Movement with its vocal leadership such as Clarke, Heseltine, Adonis and Dorrell and the British people but no-one would know this from listening to the BBC.  Another person who is never given his full, current credentials is Tony Blair, the £2m pa International Director of JP Morgan. 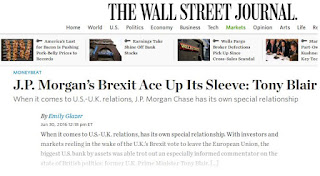 Given that JP Morgan and other US Investment Banks heavily financed StrongerIn, including providing its startup funding, this context about Blair is highly relevant.

The suppression of context is also used in documentary programming, for instance the “Conspiracy Files: Billionaire Global Mastermind?” program on BBC2 omitted the very relevant fact that after the Referendum George Soros financed “Best for Britain“ with £620000, money that supports the European Movement and “Peoples” Vote, and he gave £30000 to #FBPE, the Twitter anti-Brexit Movement. This is the most relevant fact about Soros from the viewpoint of a British audience.  Another example is that the BBC documentary on the European Movement’s Bilderberg Group failed entirely to mention that it was founded by Jozef Retinger to raise funds and support for the European Movement. Indeed, both these documentaries set out to prove that Soros and the Bilderberg Group were entirely harmless.  We could be forgiven for believing that the BBC sees its role as whitewashing the financial backers of the European Movement.

Who is responsible for the BBC going rogue?  The BBC has been slipping for some time but serious damage was done by David Cameron who appointed Rona Fairhead as Chair of the BBC Trust during the leaks about Cameron’s offshore holdings and during the EU Referendum.  Fairhead was a director, overseeing audits, of the subsidiary of HSBC that was largely responsible for corporate offshore accounts in Luxembourg and exposed in the “Lux Leaks” scandal.

James Harding had executive responsibility for the impartiality of the BBC during the EU Referendum and after.  He was endlessly criticised by the Brexit side of the debate for bias and his riposte to these criticisms was:

‘The Leavers’ complaint will, in no small part, be answered by what happens next and how we report it. The fact is that, since the EU referendum, there has been a revaluation of sterling, the Bank of England cut interest rates because it says the outlook for economic growth has weakened markedly and the government’s plans for Brexit are unclear. But consumer confidence has bounced back and manufacturing and services sectors have rebounded accordingly. In the months ahead, our job is to understand what Brexit actually means – without relish or alarm.’ Guardian 24/09/2016.

In other words, Harding believed that Brexit would damage the economy, that was what he considered mattered most, and those who supported Brexit would be shown the error of their ways.  A peculiar defence of impartiality when those who wanted to Leave were most concerned about independence and control.  We can only assume that he felt completely justified for Suppressing News because his Remain brain could not even countenance the idea that the EU Referendum might have been about independence.

It is particularly strange that Harding considers the economy to be the measure of Brexit yet has conspired in the almost total suppression of the parlous state of UK-EU Trading relations.  How many of us have seen this graph on the BBC?

This graph clearly shows that production of UK goods and services is increasingly occurring in the Eurozone. The consequences of this are obvious for the wages and quality of work in the UK and the deficit is now a shocking £60bn a year or more.  It seems that Harding is simply Remain and does not really have an economic holy ground because he allowed BBC Economics journalists to ignore the economics of Brexit except where it supported Remain.

Perhaps we should reflect on the fact that it is the failure of the BBC and other broadcasters to give voice to the concerns of those who want independence that has caused our “Polarised World” in the UK. That it is the shocking lack of professional standards in the broadcast media that is the problem.

The idea that Social Media allows a free for all of Fake News, unlike the holy BBC, is also part of the agenda of “Impartial Journalism in a Polarised World”.  As a polite and highly educated Twitter user who has been repeatedly bounced off the platform for pro-Brexit tweets that were definitely not rude, racist or Fake and nearly always accompanied by source references I would like the BBC to cover how social media is a pernicious influence in the entire democratic process, not because it allows free speech but because it is run by a handful of billionaire’s based in a foreign country. 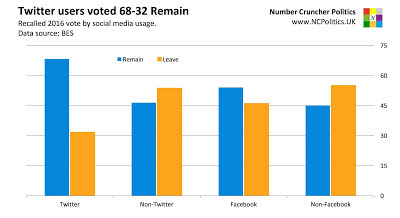 The graph above is conventionally “justified” by the demographics of those who remain on Twitter after those who support Brexit have been bounced off it by automated shadow banning and direct removal.

See also BBC News which details BBC coverage of the items below:

Dr John Sydenham has worked in International Pharmaceuticals and for one of the "big four" International Consultancies. He ran a successful company for 15 years and after selling the company devotes his time to travel, science, black labradors and freedom.
Previous Who are the Fascists?
Next The Pro UK argument has to learn from Brexit