The IndyRef2 debate is an irrelevance, nobody will call one in the wake of Brexit result

The threat of a second Scottish Independence Referendum (IndyRef2), coming about as a result of the Brexit vote in the UK-wide EU Membership Referendum, is fallacy.

There is no way we are either going to see a second Scottish Independence Referendum, or any way the Scottish Electorate would ever actually vote for Independence, at this stage.

Why?  This is simple.

Scotland cannot just decide to remain a member of the EU, even they manage to become independent before the UK has officially left.  It will involve a new application, which sounds simple enough, until the electorate are informed that they will have to accept the Euro as currency AND accept horrific austerity in order to get Scotland’s economic figures inside the regulations for EU entry.

Certainly everyone can bang the drum and suggest a ‘deal’ could be put in place, since this is a unique situation.  There may indeed be such a deal possible, to shorten Scotland’s accession period, but it will still require acceptance of the rules as they stand (ushering in the Euro and austerity).  Anything else would require time, and time is not on the side of those wishing a lengthy ‘Brexit period’.

Nicola also underestimated the EU themselves, who it appears have no plans to permit Scotland to remain a member on her own.

The last Scottish Independence Referendum was only in September 2014, where a NO vote won the day.  The NO (remaining part of the UK) option had looked a nailed on certainty, right up until close to voting day, where things were run close.

As it was, most voted to stay.  There is nothing to suggest the attitude of the Scottish public has changed, regardless of their feelings on EU membership.

Some have suggested that the ‘silent voters’, those who were responsible for saving the day for NO, would be mobilised in bigger numbers this time, unhappy that they were being faced with uncertainty again, so soon.

There are obvious dangers in calling IndyRef2.  Call it now and risk annoying those who saw the last one as hassle.  Call it now, and lose it, would remove the main shouting point for any SNP representative and may even lead to some loss of ground for the party.

Nicola has been canny, with her consistent threats of IndyRef2, without actually saying she’d call for it.

First it was the General Election of 2015, which didn’t go the way she’d have liked. She rattled her sabre, banged her drum, and kicked up a fuss.  The electorate was presented a stance suggesting the SNP were unhappy with Westminster not delivering the promises they felt they were given pre-IndyRef, but in reality they had expected more clout with an incoming Labour government (even a coalition) which did not materialise.

Now, with the Brexit result, Nicola has another chance to rattle her ‘Independence sabre’ once again. She knows, however, this is her last try.  She won’t get another.  The next IndyRef is her last chance to lead an Independent Scotland, so she’ll be careful with her timing.

A loss would spell the end of her leadership, push the Scottish Independence dream further out of her grasp, and reduce the relevance of the SNP in the eyes of the ‘rabid Nationalist’ section of their support.

The SNP didn’t make much-anticipated advances in the latest Holyrood elections, with a newly-invigorated Conservative Party making gains all over, under the guidance of the energetic (and immensely popular) Ruth Davidson.  Taking the ‘threat’ of Independence away and permitting Ruth & co to focus on the track record of SNP policy, might hasten a decline in SNP support.  The SNP would wish to calm things, see where this Tory resurgence heads, before allowing themselves open to further hazards.

The SNP were coy with the figures during the last Independence Referendum.  They overplayed the oil figures, which left them with serious egg on their face once revealed.  They presented an economic case to the electorate which left a gaping hole in their finances.

The economic case is now gone, for the forseeable future.  The UK has experienced an excellent and sustained recovery under the Tory/LibDem coalition government, then the new Tory government itself.  The suggestion that an Independent Scotland could improve on that looks threadbare now as growth and recovery have continued.

For the SNP to make a new economic case, they’d have to ensure they explain away this ‘black hole’, given it would now be in the public domain.  This might not be so simple now.

The best summary of the Scottish economy is provided by Kevin Hague (a well-respected economic blogger, columnist, businessman and funnily enough ‘EU Remain’ supporter) in his blog.  I’d also recommend anyone who thinks Scotland has a current economic case to make for Independence have a read through all of his blog.

just a thought: can we maybe debate the pros & cons of indy *after* we have some idea of what terms the EU might offer Scotland?

The final decision rests with Westminster.  Only they can authorise IndyRef2.

There will be no desire to do so, given the Brexit negotiations are being pushed so hard for, from all corners.  To try to deal with the economic uncertainty surrounding those negotiations, whilst trying to negotiate a few quick trade deals, will leave little time to permit another lengthy referendum campaign.

The Conservatives made huge gains in the latest Holyrood elections, they have an enthusiastic leader who will undoubtedly gain more support.  Why risk losing those seats from an already-divided Westminster?

There is also the fact that IndyRef2 could, if it gets messy, or if the unthinkable happened and the SNP convined voters, lead to further calls for a quick General Election.  No government wants to call an election so early in a term, when they are at their least popular, particularly with Brexit negotiations and a cabinet reshuffle looming.

So why are they shouting about IndyRef2?

The SNP exist because of this ‘desire’ for Independence.  They gather support by banging the patriotic drum, offering a caring/sharing Socialist economic outlook and offering themselves as a ‘Peoples Party’.

In reality they are one of the most divisive political parties in UK politics, second only to the IRA political wing in Northern Ireland, Sinn Fein.

They prey upon the ‘Braveheart’-supporting, wild-eyed, rabid Scot Nats.  These rabid supporters make up most of their online CyberNats, using intimidation and abuse to silence SNP critics.  I’ve had a little experience of CyberNats (anyone who criticises the SNP will have met some delights), but one can only hazard a guess to the horrific abuse someone like Kevin Hague would get.

We’ve seen consistent financial scandals surrounding SNP MP’s, they’ve even had to suspend a couple.  We’ve seen obscure spiteful comments coming from SNP MPs & MSP’s.  This all loses them a little support, though probably not amongst the rabid Nationalist portion. The focus on IndyRef relieves some of the pressure such scandals cause.

The SNP will want to wait, see if they can halt the decline.  They’ll hope the Tory gains were a natural ‘settling’ after the implosion of Scottish Labour, but they’ll not leave themselves wide open to losing further ground with a mis-placed, mis-timed Scottish Independence Referendum.

No, there will be no IndyRef2.  Not in the short term.

The sensible Scottish Nationalists, those who want Independence, but recognise they don’t want to destroy Scotland to achieve it, will win the day.  These people, I’d assume a majority of Independence seekers, recognise that to have any chance of a successful Independent Scotland, they need to spend the next 10-15 years gearing their economy towards Independence.

The economy has to be situated such that Independence will cause no relevant difference to the basic needs of the Scottish people.  It will require infrastructure, investment, jobs growth, industrial growth, improvements in Education, new ‘support’ organisations to assist business growth, etc.

Only once Scotland is ready would it make sense to call a second Independence Referendum.  Personal ambition aside, even Nicola Sturgeon must want stability for her country.

By the way, did I tell you we won the day & the UK has voted to take her freedom from an undemocratic European Union? 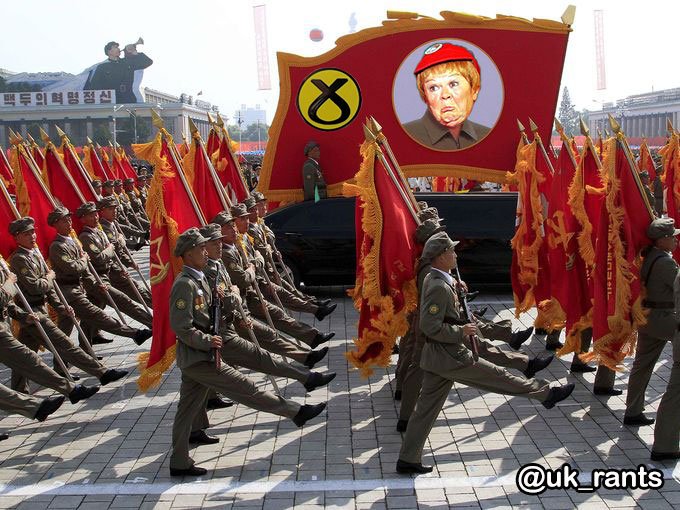 Vote #SNP.
You know you really want your kids to be guided totally by the state.#NamedPerson won’t be abused EVER..

This post was originally published by the author 25 June 2016. http://ukrants.co.uk/indyref2-debate-irrelevance-nobody-will-call-one-wake-brexit-result/

"UK Rants" is a blogger who supports both the Conservative party and leaving the European Union. He writes on current affairs to inform his readers with as much information as he can, to allow them to make most informed decision possible when voting. He blogs in his personal capacity at ukrants.co.uk.
Previous Costa Rica
Next When to invoke Article 50 and why