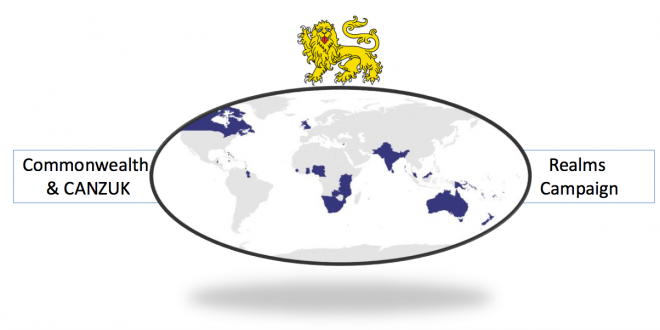 Our Petition is now uploaded and live on change.org‘s website, and are looking for supporters to sign it. We propose the government:

These four points form the key of our campaign goals, and refer to each of the three “Spheres” within the Commonwealth (Commonwealth, Realms & CANZUK).

As mentioned in previous articles here and here, the Commonwealth Advantage is the increase in trade between nations with similar structures and languages. In the case of the Commonwealth, it is estimated to increase trade by up to 50% over a non-Commonwealth nation. Due to Britain’s lack of trade negotiators, we at the CRCC believe it would make the most efficient use of these experienced professionals to conduct trade agreements that would lead to the most benefit at the least cost in time and effort.

The Commonwealth of itself has no opinion on Brexit, and as it is a collection of nation-states in an association of equals – often compared to as a traditional ‘club’. However, there are many opportunities made available by Brexit for our mutual benefit and we at the CRCC wish to see the UK strive to achieve such benefits.

The Special Passport Area was a concept leaked by the government in the Spring of 2017. The details were few, and only stated it referred to the sixteen realms – the Commonwealth states that have H.M. Queen Elizabeth II as their head of state. Precisely what the benefits were to be was not stated, although it was inferred to be a middle-ground between the current rigorous immigration system and complete free movement. We at the CRCC were very interested in the concept and we are calling for the government to reveal more details about this proposal.

CANZUK Free Movement was first proposed by CANZUK International in (CI) the spring of 2015, and the concept has attracted a lot of support.  CI is a fellow campaign and one of the CRCC’s supporters. We support CANZUK Free Movement due to the level of public support, which is above 60% in all four nations, and also due to it being a remarkable opportunity for citizens of all four nations.

The Free Movement Area, which currently includes on Australia and New Zealand, would continue to grow and accession would theoretically be available to any Realm that meets the standard of living requirements, to ensure there is no risk of asymmetric movement which would put the system under considerable strain. It would also not solely be limited to the Realms, but it is unlikely that other Commonwealth nations other than Singapore would wish, or meet the criteria, to join.

The British government’s position on Visas to Commonwealth Citizens shows no difference than to citizens of nations with no links to the UK. Indeed, tourist visas for Commonwealth citizens are more expensive than for citizens of China, an example of how the current system ignores the importance of the Commonwealth. This, and repeated crackdowns on immigration due to public concern in the UK, has created a scenario hostile to Commonwealth citizens attempting to move, work or study in the UK. Ironically, Enoch Powell, the infamous British politician who feared that immigration from developing Commonwealth nations would lead to “Rivers Of Blood” was supportive of Commonwealth students coming to the UK. It is extraordinarily regrettable that repeated governments have shifted government policy to the right of Mr. Powell.

Further details on why the government should change the tourist and business visa system is mentioned here.

We would appreciate if all of our readers sign and forward the petition to others. The goals listed are workable and beneficial. With your help, we will make them achievable.

Isaac is a British undergrad studying Political Science and Business on the US-Canadian border. Having been an expat since 2010, he's a globetrotter who enjoys visiting different cultures. Describes himself as a Classical Liberal / Conservative, Messianic, history fan, with a passion for the Commonwealth & Anglosphere. He also probably spends too much time on political issues.
Previous Ireland shows why Scotland will never leave
Next Hammond’s chance