Once again Northern Ireland in general and the DUP in particular are taking a bit of a bashing because the Republic of Ireland voted to change its constitution the other week. I doubt there would be any criticism of the DUP if Slovenia had chosen to make such a change. I doubt indeed that anyone would have noticed. But very strange logic applies in Ireland.

There is nothing inherently about being Catholic that means a person has to support a united Ireland, Scottish independence or not being British. There are nearly six million Catholics in the UK. The vast majority want to continue living in the UK and happily describe themselves as British. The debate about Northern Ireland should therefore have nothing to do with religion or demographics. It should be the same debate as everywhere else in the UK. Do you want to keep your country intact? Do you value being British?

Because I favour taking religion out of politics I likewise think it is mistaken to view the debate about abortion through the lens of religion. What has changed since Ireland voted in 1983 “to recognise the equal right to life of the mother and the unborn?” There has been a huge scandal involving child abuse in the Catholic Church in Ireland. Consequently many Irish people have ceased to have much faith in the Church and are less willing for the Church to tell them what to do. But to respond to child abuse by voting to kill them instead is a decidedly odd response. 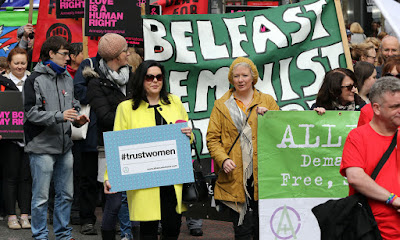 The problem with basing the debate about abortion on religion is that it then depends on faith. Christianity cannot be proved and whatever truth it contains cannot be demonstrated by science or reason. This is not a flaw. It’s a feature. If I could prove a religious claim it would not be possible to have faith in it, because instead I would have knowledge. This means that if someone uses religious reasons in a debate, these reasons will not be compelling to non-believers or those who have a different faith. Therefore as faith declined in Ireland so too the rights of the unborn declined. The reason for this is that those rights were grounded in faith.  But it is always a mistake to build a house upon foundations that may in time become eroded. At that point the house is liable to collapse.

You really have two choices here. Either you can deny that killing people is wrong or you can deny that babies in the womb are people. The first option is unpalatable for obvious reasons. If killing some people is not wrong, where are we going to draw the line? Does anyone in our society have the right to choose who they kill? I would prefer not to live in such a society. So clearly we have to accept that killing people is wrong.

I have a colleague who recently became pregnant. After the necessary scan she came to work and told everyone she was having a baby. She then passed round pictures pointing out the various features of the baby. Everyone gushed about it. She didn’t say she was having a foetus. She didn’t use language that would minimise the humanity of her baby. It was as much a baby there and then as it would be when it was born. But she could with ease have simply decided to kill it. Oddly however it would be grotesquely wrong if I decided to kill her baby in the womb. It would be something very like murder if I somehow deliberately caused her to miscarry. But the baby in each case would be the same. It’s a very strange moral situation when under one circumstance the exactly same sort of being is a human being to whom we have a duty, while in another circumstance it is nothing and can be discarded.

But what about the rights of a woman to do what she wants with her body? Indeed these rights must be taken into account. But which human right gives me the right to kill another human being? Self-defence perhaps gives me that right. But babies in the womb are only rarely a threat to a woman’s safety. The law can easily protect the lives of women and can be worded to avoid those unusual cases where a pregnant woman’s life is threatened by her pregnancy.

But doesn’t a woman have the right to do what she pleases with her own body? Even if she does it is worth reflecting on whether there is someone else’s body inside her when she is pregnant and whether that someone else might reasonably limit her right to do as she pleases. After all I don’t have the right to do exactly what I please with my body when I’m driving. I can’t for instance use my arm to turn the steering wheel of my car so that it crashes into someone else. If I do, I am liable to prosecution. Likewise if I neglect an infant who is dependent on me so that they die I will be prosecuted. I will probably even be prosecuted if I fail to look after a dog. In that case why do I not have an obligation to look after a human being who temporarily is located in my womb?

In the end if babies in the womb are people, we can reasonably expect women to respect the rights of those people just like any other people on the planet. This may involve some inconvenience for a few months. But do we really want to go down the route that I can kill people when they are inconvenient. Old people are frequently inconvenient. The location of a human being, inside a womb or outside a womb, does not change its moral status.

This has the following consequence. It cannot be grounds for killing a human being that he is the result of rape or incest. If I were teaching in a school and discovered that one of the children in the class was conceived as a result of rape or incest would I be morally justified in killing it? Obviously not. But why should I be justified in killing it because it is situated in a womb rather than a classroom?

The pro-abortion argument then is left with having to deny that babies in the womb are people.

Elisabeth, the mother of John the Baptist, is filled with the Holy Spirit at the point when she first feels her baby moving. The baby gains a soul at this point not before.

From this we need not be quite as strict as some opponents of abortion. There is a window of opportunity where it is possible to abort babies without doing anything seriously wrong. Quickening occurs between 15-20 weeks after conception. What matters however is when the baby begins to think and feel and when it is conscious of itself. This does not require that you actually believe in souls.

Rape victims and victims of incest ought to be able to have an early abortion. Other women too who elect to have an abortion as soon as they discover that they are pregnant need not feel that they are doing anything particularly wrong. A cluster of cells that is neither conscious nor self-conscious may or may not become a human being, but it is not a human being yet. A potential thing is not the thing it might become. An acorn is not an oak and therefore while chopping down an oak may be wrong throwing an acorn on the fire is morally unproblematic.

The argument about abortion must be grounded not in theology but in what we think a human being is. It is not primarily about women’s rights, because those rights cannot extend to killing other human beings.  But it is not necessary to argue that actual human beings begin to live from the moment of conception. The potential is not the actual.

In limiting abortion to the first few weeks of pregnancy Ireland may have found a stronger foundation for protecting the rights of the unborn than it had previously. Rather than criticise Northern Ireland for not immediately imitating the Republic, why not instead criticise the UK for not immediately following Ireland’s lead by lowering the current abortion limit from 24 weeks to 12. If the UK were to do this, then people in Northern Ireland might in time decide that they would like to follow suit. That would be up to them.

We ought to be living in a free society which is tolerant of the views of everybody whether religious or not. Religious views ought not to determine at what point abortion is legal or illegal. We do not, thank God, live in a theocracy. But I am free to think that early abortion is morally and theologically unproblematic while also maintaining that late abortion is a form of legalised murder. You do not have the right to choose to murder. Killing people is wrong.

This post was originally published by the author on her personal blog: https://www.effiedeans.com/2018/06/killing-people-is-wrong.html

Effie Deans is a pro UK blogger who works at the University of Aberdeen. She spent many years living in Russia and the Soviet Union, but came home to Scotland so as to enjoy living in a multi-party democracy! When not occupied with Scottish politics she writes fiction and thinks about theology, philosophy and Russian literature.
Previous Quality over Quantity – How Commonwealth Trade is globalisation’s path forward
Next #Brexit and the Legitimacy of Procedure