Macron, the Future of the European Union (EU) and why #Brexit is Irreversible

New French President Emmanuel Macron is welcomed by German Chancellor Angela Merkel in Berlin Monday, May 15, 2017, during his first foreign trip after his inauguration the day before. (AP Photo/Michael Sohn)

The election of Emmanuel Macron is the beginning of a rapid and major change in EU politics.  Macron is unashamedly enthusiastic about the EU as a political union.  The British broadcast media have suppressed almost any mention of this Eurozone political union so here is a summary for those readers who are unaware of what is happening.

The Eurozone is composed of the 19 EU nations that use the Euro and includes France, Germany, Spain, Italy and the Netherlands. Seven further EU countries are waiting to join so that, apart from Denmark, the EU is effectively the Eurozone.   The Eurozone has been in crisis since before 2007 and its leaders have produced a plan for the next eight years to resolve the crisis called the “Five President’s Report”, “Completing Europe’s Economic and Monetary Union”. 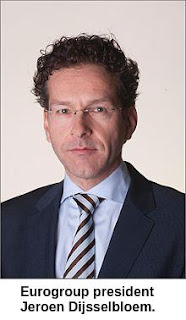 This plan has two stages.  In Stage 1, which will be complete by 30th June 2017, the Eurozone members agree to fully implement the Eurozone constitution, including full adherence to the Stability and Growth Pact which specifies a wide range of measures including central approval of national budgets.  The Eurozone (Eurogroup) already has a finance committee and a President, Jeroen Dijsselbloem. (Unelected as usual in the EU).

In Stage 2 various Institutions will be established to manage the introduction of common standards: “The common standards should focus primarily on labour markets, competitiveness, business environment and public administrations, as well as certain aspects of tax policy (e.g. corporate tax base).”.  This will include shared sovereignty with “strong decision-making at euro area level”.

Stage 1 has already provided the legal framework for union and Stage 2 deals with the convergence mechanisms to fully implement this framework.  These convergence mechanisms entail decision making at the level of the EU (which, with the exit of the UK, is largely the Eurozone).  The completion of Eurozone Union will change the EU from a set of cooperating states to a single nation state with its capital in Brussels.

Even Hollande would have been a problem for Eurozone Union, Le Pen (a neo fascist) would have been a disaster but Macron is the EU’s man.  He “intends to press for the creation of a parliament and budget for the eurozone” Euractiv 15/5/2017.

Immediately after his inauguration Macron met with Angela Merkel. They discussed Macron’s plans for “a separate budget, legislature and finance minister for the currency bloc” and Merkel announced that “from the German point of view, it’s possible to change the treaty if it makes sense”.   This is the usual EU smokescreen because it is doubtful that much Treaty change will be needed given that the existing Treaties are clear that groups of nations are free to pursue enhanced union within the EU (See Note 1).  If Merkel and Macron agree on enhanced union it will happen.

According to the Five President’s Report the full union of the Eurozone will be complete by 2025.

This affects Brexit.  It will be clear by 2022 that any return to the EU will entail becoming a region of another country.  The Eurozone will, de facto, be the EU.  If Brexit were reversed we would have to change our currency, merge our army with the EU army and hand over central government to Brussels.  It would be impossible for the subversives who desire the end of the UK to ignore these facts.  Remainers would need to state publicly that they want to terminate their own nation.  Those who voted Remain because they liked cooperation would be forced to decide whether they want to abandon cooperation and submit to integration and many would reject the idea.

Remain Extremists will, as they did in the Referendum, say “why have nations anyway?” They will say that Nation States are nothing more than reservoirs of racism that elevate their own ethnicity above all others. The truth is very different, Nations are organised groups of people who operate an economy and social system based on a particular area of land.  They have cultures and economies that are usually dynamically adapting to local conditions and to the relationship between the locality and the world at large.   Nations are the diverse socio-economic organisations that are essential for the flowering of humanity.  Without Nations most differences will disappear. Independent Nations are a “good thing”: they saved the world from the ideology of fascism in the 20th century.  Nations are the cradle of diversity.  It is ideologies that are evil, especially empire building, Internationalist ideologies like fascism or communism.  Most of the Nations of the world cooperate with each other. They trade, they allow people to move freely between countries for tourism and business and have devised treaties to lower the chance of conflict.

Of course, when the debate resolves into joining the EU Nation versus remaining a separate UK Nation it will be much harder to maintain the propaganda that Nations are evil.

Note 1:  According to the Treaty on European Union, Article 20 “Enhanced cooperation [between groups of states] shall aim to further the objectives of the Union, protect its interests and reinforce its integration process.”  Article 20 is crucial because it allows the whole Eurozone to form a political union without any Treaty change.

Most of the major countries of the EU have “DETERMINED to lay the foundations of an ever closer union among the peoples of Europe” and are working towards political union.

This post was originally posted by the author on his personal blog: http://pol-check.blogspot.co.uk/2017/05/macron-future-of-european-union-eu-and.html

Dr John Sydenham has worked in International Pharmaceuticals and for one of the "big four" International Consultancies. He ran a successful company for 15 years and after selling the company devotes his time to travel, science, black labradors and freedom.
Previous Changing the conventions of Scottish politics
Next Summer school in Geneva