The most striking event of the past year and, in retrospect, of the decade, is the continuing rise of the Media Industry (Television, Film, News, Advertising, Social Media, Internet Sales, Computer Games etc).  It is now worth over $2 trillion worldwide.  In the UK alone it is worth about £100 bn.  This rise, coupled with immersion in smart phones, has created a new society of detached, networked people.  When this post-modern cloud of humanity touches opposition it can usually simply sweep it aside.  Those who control it can create angry, closed groups to influence the world outside.  These are the last years when those who tend their gardens, visit friends and family regularly and attend physical political meetings and social events will have influence.  Who will rule then?

In the UK the Brexit debate is resolving into three options.  The first is to pass Theresa May’s Withdrawal Agreement, the second is to leave the EU without a deal (or with a rudimentary set of agreements) and the third is to postpone Brexit.  There is a great deal of talk about Second Referendums but realistically such possibilities would take a year or more to come to pass.

If Theresa May is at all competent, and we must doubt this, expect the vote on the Withdrawal Agreement to be delayed until the last possible moment (perhaps 21st January).  It is only when the Irish are faced with the imminent possibility of definite borders after a no-deal Brexit that they will change their backstop from a perpetual Customs Union to a condition with an expiry date or a clear mechanism for removal.  If the Irish agree to this change the Withdrawal Agreement will, reluctantly, be approved by the UK Parliament.

If the Irish stick to their guns, something they are famed for doing, then Parliament will be faced with a battle between leaving with a rudimentary deal on March 29th or delaying Brexit.  The problem with the second option is that there is no other deal available so delaying Brexit is equivalent to refusing to implement it, delaying Brexit for second referendums etc. will be evidence of this refusal.

The greatest beneficiaries of “seamless” trade are the Media Corporations whose Network operates across all borders except the Chinese and acouple of Islamic countries.  If Brexit were delayed they will devote every resource to try to overturn it.  If this comes to pass we should all turn off our televisions, radios and social media to avoid indoctrination but we won’t.

It looks like 2019 is going to be a poor year for the global economy, not terrible and not good.

The lowered industrial production in 2018 will feed through in early 2019 into a small decrease in GDP growth for many countries. Global population growth is about 1% a year so any increase in Industrial Production below 1% per annum is actually a fall in production per head. The whole world has been getting slightly poorer per head since 2012.

The stock markets of the world were overheated in 2017-18 and have been adjusting in the last quarter of 2018.  They are now not far off the long term price earnings ratio of around 15:1. Expect a slight overshoot of stock prices downwards followed by a small recovery later in the year.

The UK economy will be steady during 2019, Brexit or no Brexit.  The role of the EU in the UK economy has been massively overhyped by the Multinational Controlled Media. 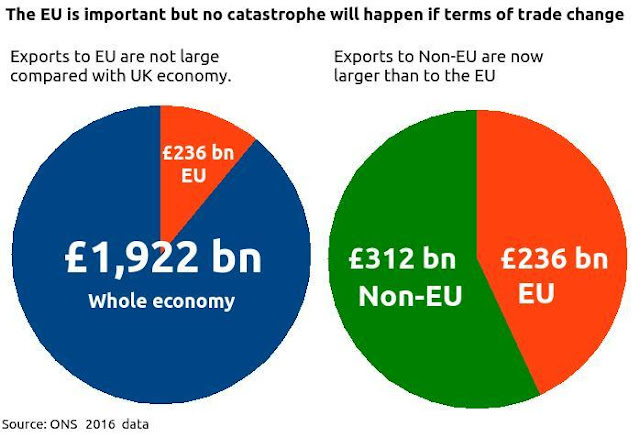 This post was originally published by the author on his personal blog: http://pol-check.blogspot.com/2018/12/new-year-predictions-for-2019.html

Dr John Sydenham has worked in International Pharmaceuticals and for one of the "big four" International Consultancies. He ran a successful company for 15 years and after selling the company devotes his time to travel, science, black labradors and freedom.
Previous Northern Ireland is no one’s backstop
Next The Euro at 20: Still Destroying Prosperity