No Deal Brexit (WTO, No Transition) will be fine

The Treasury forecasts for the effect of the Referendum on the UK economy are now known to have been wrong. There was no huge economic meltdown due to “uncertainty” in 2017, unemployment has stayed low and inflation is steady.  In fact the UK economy has performed better than that of Germany and Italy over the past 3 years. Economics correspondents know this but have have failed to cover it with any prominence.

In late 2018 to early 2019 The Bank of England and Treasury/Government produced reports for a “No Deal”.  The Treasury forecasts were actually quite mild but packaged as the sum of small effects over 12 years that gave a total, imaginary figure of 7.5% fall in GDP.  The figure is imaginary because no economist can reliably predict even 2 years ahead.

It is now almost four years since the Referendum, the UK is still in the EU and its economy is doing as well as the other large economies which means we have 2 years of extra data from which to construct a true baseline.

The treasury figures extended to 2030 and over this 12 year period the difference between the real and imaginary badelines becomes 5%.  This difference in baseline changes the Treasury figures from a 7.5% fall in GDP by 2030 to a 2.5% fall by 2030.  This is only 0.2% per annum!  Such a small economic effect is not really predictable.  Yet we have a majority of MPs in the House of Commons claiming to be heroically saving us from No Deal.

Many of the economist’s reports that cover the effect of No Deal use the false Bank of England predictions for a baseline so any that predict less than 5% fall in GDP may now be predicting a growth in GDP after Brexit relative to remaining.  Of course, we cannot know for sure because, as the shifting baseline over the past 2 years shows: economists cannot predict more than 2 years hence.

“The “disruptive” and the “disorderly” Brexit scenarios are therefore not forecasts for the economy in the event that the UK leaves the EU with no deal and no transition period.” See No Deal Fake News

Indeed, the Bank of England “scenario” for a No Deal Brexit was less severe than the ordinary, annual scenario used for stress testing banks, even before the false baseline became clear.  The Bank has already adjusted its “scenario” for No Deal to be 2% less severe but was careful not to state clearly that this was because the baseline had changed – probably because this would draw attention to baselines in all the Remain economist’s reports.

The best kept secret of the entire Referendum campaign is that the EU has not benefited you and me.

In general the UK has just managed to keep its GDP per head as a constant proportion of US GDP per head. 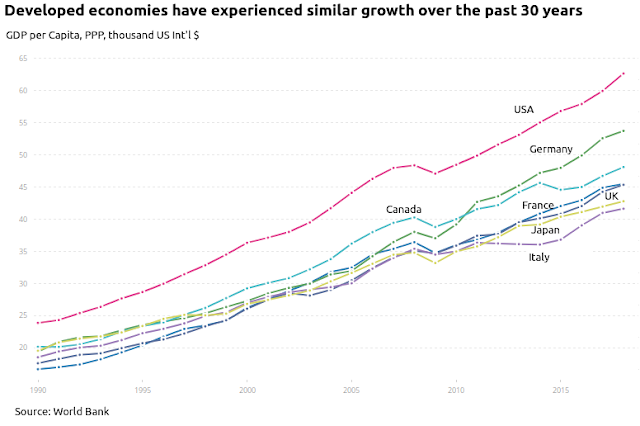 There is no indication that being in the EU has been a huge boost to the UK economy compared with not being in the EU so the starting assumption that tariffs, trade terms etc must, inevitably, damage the UK economy is nonsense.  When the “No Deal” “predictions” are considered in depth, such as in this report by a group of Remainer economists – How the Economics Profession got it wrong on Brexit – it is obvious that economic predictions are being used as political fake news.

Another great “con” of the No Deal predictions is that they mix up GDP growth due to increased population size with GDP growth due to economic activity. It is assumed that the population will not grow as strongly after Brexit (great news, if true) and often also assumed that each new worker that would have arrived is far more productive than those already here.  As an example in the Greater London Authority report,  Preparing for Brexit), commissioned from the economic consultants Cambridge Econometrics  (CE):

In scenario 4 instance GVA is predicted to be 2.7% lower, and population to be 2.2% lower. Combining these two estimates gives a reduction of per capita GVA of 0.5% by 2030.

The actual data for the effect of population growth in the UK is that each added worker adds a worker’s worth of GDP – it does not increase our individual wealth.

This post was originally published by the author on his personal blog: http://pol-check.blogspot.com/2019/10/no-deal-brexit-wto-no-transition.html

Dr John Sydenham has worked in International Pharmaceuticals and for one of the "big four" International Consultancies. He ran a successful company for 15 years and after selling the company devotes his time to travel, science, black labradors and freedom.
Previous What if a Yes vote had been blocked like Brexit?
Next The EU is useless at negotiating Free Trade Agreements