This article will provide clear, click through links to all of its source data.  Click on these links whenever you feel that you must check a source.

First of all, what are the current economists’ predictions for the UK economy for 2019 to 2020? 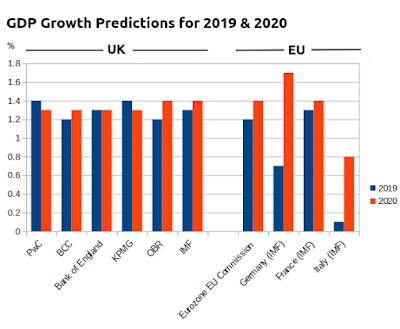 What? No cliff-edge disaster catastrophe armageddon for a No Deal Brexit? Of course not. The economists all got burnt in 2016 with predictions for immediate UK recession after the EU Referendum and most don’t want to do it again.  But if you read the Guardian or Independent or listen to the broadcast News, Remain MPs or Philip Hammond you might be thinking there should be a catastrophe in the offing…  If you think this you are a victim of fake news.

In The Guardian article: Bank of England says no-deal Brexit would be worse than 2008 crisis  we are told that “Bank warns of immediate economic crash, GDP to fall by 8%, unemployment to rise to 7.5%”.  Fortunately the original Bank of England report EU withdrawal scenarios and monetary and financial stability is available.   The Guardian quote comes from Table 3.2.3 on page 52 which summarises the Disorderly No Deal Scenario.  The Guardian Journalists seemed to miss entirely the proviso on page 6 of the Bank of England scenarios:

“The “disruptive” and the “disorderly” Brexit scenarios are therefore not forecasts for the economy in the event that the UK leaves the EU with no deal and no transition period.”  (bold text added for emphasis).

The Bank clearly states that the scenarios were NOT forecasts for what would happen to the economy.

The purpose of the scenarios was to test whether the banking system could survive the absolutely worst possible interpretation of each scenario.  The authors were not concerned whether the scenarios were likely or much concerned whether they were reasonable, they had some extra variables in the No Deal scenario, such as stretching NTBs to the limit and toying with huge net emigration from the UK, which they felt might have an outside chance of happening and if there was any chance of them happening they threw them in to stress test the banks.  Reasonable forecasts were not their task, as they pointed out on page 6.  Although the Bank’s Brexit scenarios sometimes seemed bad the report did point out that they were not actually worse than the normal annual stress test of the banking system: “The severity of the UK economic stress in the 2018 stress test which the major UK banks have passed is significantly greater than the economic scenario for Brexit based on ‘worst case’ assumptions (see Chart D)”.  Why didn’t the Guardian have a headline saying: “forget Brexit, ordinary bank scenarios show Armageddon tomorrow!”? Yes, the Guardian are purveyors of fake news because their article on No Deal brexit was simply a lie.

It was not just the Guardian – take the Independent Newspaper’s report: “A “disorderly” no-deal Brexit in March could plunge the UK economy into a larger recession than the global financial crisis a decade ago, according to the Bank of England”.  Now shake your head and recall that the normal stress test for UK banks “is significantly greater than the economic scenario for Brexit based on ‘worst case’ assumptions (see Chart D)”.  Where was the Independent’s headline saying “normal Bank scenario means death for all of us!”?  The Broadcasters did the same and the BBC still employs economics editors who talk of cliff edges and crashing out as disasters that will apparently “definitely” happen after No Deal.

This brings us to the Treasury and Government Reports on No Deal.  The most important thing to remember about these reports is that they focus on the long term, cumulative effects of Brexit up to the year 2030.  Twelve years in the future.  Simply producing such a report is fake news because all economists are aware that economists cannot predict more than 1-2 years in the future.  See for instance GDP predictions are reliable only in the short term (Economist Dec 15th 2018).  This is a very important point.  It negates the entire exercise and turns it into fake news. In fact most of the Government Brexit reports can be negated on almost every ground, not just that of making predictions for an impossibly long period – see How the economics profession got it wrong on Brexit .

Anyway, suppose we accepted that there was some validity to the government’s amazing predictions for 12 years in the future.  The Government’s EU Exit: long term analysis has its punch line on page 49, fig 4.1.  The most obvious feature of this is that the government simply makes up a figure for non-tariff barriers that accounts for half of its alleged effect of a No Deal Brexit, it also adds in migration effects without noting that lowered population growth lowers GDP but does not make us poorer.

However, suppose we are determined to accept the government figures despite the fact they seem to be invented and mix up population and economic growth.  The government provides this graph:

The red squares have been added here to the reports that were produced before the EU Referendum. These reports with a red square are particularly absurd because they are pre-referendum reports most of which said that the referendum alone would create most of the fall in GDP in 2017-2019.  The OECD figure 11 includes a 1.25% drop in GDP by 2018.  The PWC report has, for obvious reasons been removed from online access but had a 5.5% drop by 2020. Fortunately a copy of the “punch line page” of the PwC report is available online:

If we add back the faulty predictions for 2016-2019 based on uncertainty in the 2015/2016 reports we get much less negative or even positive effects for a No Deal Brexit.  Why did no economics journalists spot this?  Why did the Treasury/Government deliberately fail to mention that most of the GDP fall predicted in almost half its independent reports was predicted to occur before 2019 and did not happen?

A No Deal Brexit would, according to the government, result in a 7.5% cumulative reduction in GDP by 2030.  This would amount to 0.6% pa. The first thing that strikes us is why 2030? In 50 years we could have a 30% headline grabbing reduction.  The reason why it is 12 years is that 7% is a small enough figure to allow the headline writers to forget that the alleged GDP reduction is the total for a 12-15 year period and quote it as if it could happen tomorrow.

Here is the data for the government’s “predictions” as annual effects rather than effects summed together up to 2030: 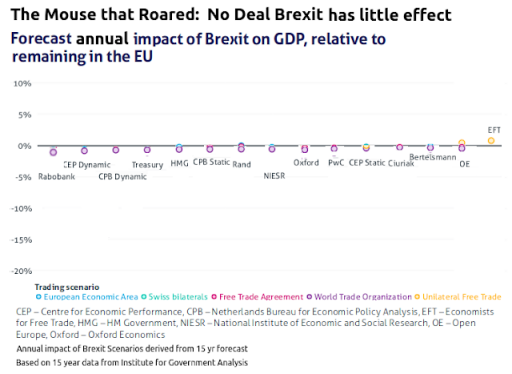 What headlines did this generate?  Very few because the newspapers and broadcasters had already expended their shock and horror over the Bank of England forecasts – the ones that they failed to spot were explicitly not forecasts.  It is also difficult to build up terror on the basis of less than 0.6% a year foregone rise in GDP that will probably not happen because economists cannot predict more than 24 months into the future at best.

There is a Parliamentary Committee that is supposed to investigate fake news. They have been silent on this worst example of fake news in British history.

See The No Deal Predictions for why Deal or No Deal will be little different for the UK economy.

This post was originally published by the author on his personal blog: http://pol-check.blogspot.com/2019/08/no-deal-fake-news.html

Dr John Sydenham has worked in International Pharmaceuticals and for one of the "big four" International Consultancies. He ran a successful company for 15 years and after selling the company devotes his time to travel, science, black labradors and freedom.
Previous “No deal” or Withdrawal Agreement?
Next Only Euronationalism could make Tories vote for Corbyn