Northern Ireland is no one’s backstop

The treatment of Northern Ireland in the context of the negotiations between the EU and the UK has shown the inconsistency of the EU’s position with regard to nationalism.

The EU rightly condemned Crimea’s secession from Ukraine and reunification with Russia. This was not so much because the referendum that led to this secession was held under dubious circumstances. Crimean secession would have been condemned even if the vote had been completely free and fair. The reason is that Crimea is a part of a sovereign nation state called Ukraine and parts of sovereign nation states may not legally secede without permission.

This position was reiterated with regard to Catalonia. It simply did not matter whether a majority in Catalonia wanted independence or whether they didn’t. So long as Spain refuses to allow a legal referendum on independence and refuses to recognise the right of Catalonians to create a sovereign nation state, then Catalonia will remain legally a part of Spain.

There are similar examples all over the world. The right of a sovereign nation state to maintain its territorial integrity is insurmountable so long as it does not oppress or attack the people living in part of its territory. It was only because Serbia attacked the people in Kosovo that international opinion was willing to make an exception and grant the right of Kosovo to become independent.

International opinion has also favoured the right of colonies to become independent, but it is important to recognise what is and what is not a colony. Argentina was a Spanish colony. Catalonia is not a Spanish colony. If you really can’t see the difference, you might benefit from a pair of glasses. If Catalonia were to be described as a colony, then half of Europe would have a colonial relationship to the other half.

The peculiar thing about Northern Ireland then is that the EU is unwilling to treat it in the same way as it treated Catalonia and Crimea. Northern Ireland is not a colony. Some Irish nationalists, thereby making the case for Ulster unionism, still speak of the people of Northern Ireland as settlers having been planted there. But if we treat everyone whose ancestors moved somewhere in the fifteenth century as illegitimate colonists then we are liable to end up thinking that virtually the whole population of the United States of America has no right to live where they do.

Northern Ireland is an integral part of the sovereign nation state called the United Kingdom. The Republic of Ireland has no more legitimate claim to a part of that nation state than Russia has a claim to Crimea. It simply does not matter that Crimea was once a part of Russia. Nor does it matter if the majority of the population of Crimea think of themselves as Russian, speak Russian and would like to secede from Ukraine. Crimean secession would be illegal even if all these things were true. It is for this reason that nearly the whole world continues to protest against Russia’s annexation of the territory of a neighbouring state.

There are various treaties that exist between the UK and Ireland, which allow both the people of Northern Ireland and the people of the Republic to hold votes regarding Northern Ireland’s status, but the UK as a sovereign nation state can choose to renounce or renegotiate any treaty that it pleases. Lots of historical treaties have become obsolete, have been broken, or simply no longer apply.  The UK therefore could decide that such treaties that currently exist between itself and Ireland were obtained by coercion as a result of terrorism and were therefore inconsistent with the British Government’s longstanding policy of not appeasing terrorists.

Could such a border exist between Catalonia and the rest of Spain? Obviously not. Spain would not accept it, because it would encourage Catalan secession. Would any other sovereign nation state in the EU accept such a regulatory border? No. This is the sort of thing that a sovereign nation state goes to war to prevent happening. If you don’t fight for your territorial integrity, what do you fight for?

No-one is going to impose a hard border between Northern Ireland and the Republic. The British are not going to do it, nor are the Irish, nor are the EU. But the Irish Republic has used this non-issue to further its irredentist and quite illegitimate claim to Northern Ireland and it has done so with the backing of the EU. This alone must be grounds for the UK Government reviewing the Belfast Agreement. It is quite intolerable that, backed by terrorist threats, the Irish Government seeks to move towards a position where it can call for a referendum on Irish unification. This is no better than Russia using military force to win a referendum in order to justify its claim to Crimea.

It is time for the UK, just like Spain and Ukraine and indeed the vast majority of states in the world, to assert that our territory is indivisible. Secession and annexation is no more legitimate a foreign policy goal in Ireland than it is Ukraine. The Republic of Ireland has no more claim to the territory of another sovereign nation state than does Haiti have a claim to the Dominican Republic.  The mere fact that you share an island does not allow you to steal another person’s home.

The EU’s hypocrisy on this issue is dangerous for stability in Europe. In attempting to punish Britain by furthering the aims of Irish nationalism it will encourage such nationalism elsewhere in Europe. Why shouldn’t Russia seek to reunify what was once “All the Russias” including parts of what is now the EU such as Poland and the Baltic States. If reunification is a morally worthy goal for Ireland, why not for Austria, Russia or dare I say it, Germany. No doubt Austrian, German and Russian nationalists would be delighted to go back to their 1914 borders. 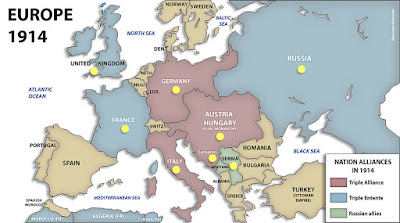 This post was originally published by the author on her personal blog: https://www.effiedeans.com/2018/12/northern-ireland-is-no-ones-backstop.html

Effie Deans is a pro UK blogger who works at the University of Aberdeen. She spent many years living in Russia and the Soviet Union, but came home to Scotland so as to enjoy living in a multi-party democracy! When not occupied with Scottish politics she writes fiction and thinks about theology, philosophy and Russian literature.
Previous The Many Lies of the Remain Campaign
Next New Year Predictions for 2019