Nothing’s too good for the man who beat Alex Salmond

I remember seeing Alex Salmond sometime in 2017. He lives quite near me and it was common enough to see him around, but this time there was something different. He was locked out of his car. He was on his phone. He was trying to pull the door handles. He was talking loudly, and he was flustered. He noticed me looking down at him from the bus stop and he waved. I waved back. I knew him slightly. He tried to make light of the situation, but I could tell he was angry. When his flunkies arrived with the car keys, I wondered about a man who thought he could run a country being unable to run a car. This was a couple of weeks before Colin Clark defeated Salmond in the General Election.

Salmond was always cocky. If you like old films, you might recall Lee Marvin in The Man who shot Liberty Valance. Of course, Lee playing Valance was rather thinner than and more handsome than Alex playing Salmond. But there is the same swagger. Neither Valance nor Salmond believed they could be defeated. It’s what makes them both bullies. Salmond just knew he had won the referendum in 2014. How dare the voters of Scotland not follow his will anyway. But I wonder if he had just begun to have doubts in those weeks leading up to the election in 2017. Had he found rather too many Conservatives on the doorstep? Did the numbers not quite add up? But no, he was probably still thinking that he would beat the Tory in Gordon right up until the moment Colin Clark beat him.

“This time right between the eyes”, I can imagine Salmond thinking as he arrived at the count looked at his opponent with the blue rosette. But it didn’t work that way. The people of Gordon had seen through the SNP. They saw that they had a choice between a decent local man Colin Clark who understood Aberdeenshire and what its people really needed and Salmond an opportunist a man who had done more to divide Gordon and indeed Scotland than any of us could remember.

“Nothing’s too good for the man who shot Liberty Valance” is the line that closes the movie. The film is about a political career built upon the miracle of a decent ordinary citizen standing up to a gunfighter and winning. It’s a version of the tortoise and the hare and the proverb “Pride goeth before destruction, and an haughty spirit before a fall.” It’s a morality tale that has been played out from Ancient Greece to modern Gordon, via the pages of the Shinbone Star and the Turriff Squeak. It’s about printing the legend. Here is the legend of Colin Clark. 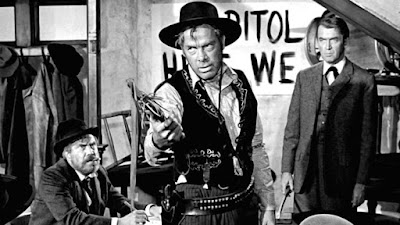 The SNP had promised that the 2014 referendum would be decisive and that everyone would accept the result. They had signed an agreement stating this. But we all found out that we couldn’t believe anything Salmond says. The SNP didn’t take No for an answer and neither did Salmond. He thought he could ignore what the majority wanted. It has never mattered what anyone else wanted to Salmond. The only thing that mattered was what he wanted. This is the whole problem with the independence movement. Their goal of Scottish independence transcends everything and justifies anything.

This is the mistake that all politicians make who think that their goal, whether it be socialism or independence or anything else is an end that justifies whatever means they choose to arrive at it. People who think this way rapidly find it easy to justify bending or breaking one moral rule for the sake of their great cause. But once you begin to do wrong you rapidly find that the cause itself has been infected.

Hardly anyone put up a poster saying they would vote for Colin Clark, but there were lots of SNP posters. But this was the same story in 2014. Hardly anyone dared to put up a No poster. Was there intimidation or did this simply happen by chance? But we get to vote in secret. This is what defeated the SNP during the independence referendum. It’s what defeated Salmond in 2017.  It will defeat many SNP candidates in 2019 too.

I haven’t always agreed with everything the Scottish Conservative Party has stood for. I’m a Brexit supporter. I don’t believe that the SNP should have the right to continually threaten the existence of the United Kingdom. I believe in lowering taxes and gradually reducing the size of the state. I believe in free markets and free trade, which is why I reject the protectionism of the EU’s Common External Tariff. I was sometimes been critical of Ruth Davidson, but I also recognise that she did more to revive Scottish Conservatism than any one else.

Alex Salmond is a bully and a rogue. He has behaved in Scotland like a bandit. Who stopped him? All those people who rejected Scottish independence helped, but it wasn’t enough. Like Freddy Kruger Salmond just kept on going. The movie was over, but his hand shot out of the ground one more time. The nightmare on SNP street just kept on going, sequel after sequel. Salmond was elected MP for Gordon in 2015. Colin Clark tried to stop him, but he failed because too many Gordon voters chose the Lib Dems. But Colin Clark kept trying. No doubt he too had learned a lesson about spiders. I wonder if when Salmond was locked out of his car, he had a premonition that soon he would be locked out of Parliament. But no. Salmond like every other bandit will be cocky to the end.

It was Colin Clark who took on the SNP Goliath and came out victorious. He deserves our gratitude but only asks for our votes, because “Nothing’s too good for the man who beat Alex Salmond”.

This post was originally published by the author on her personal blog: https://www.effiedeans.com/2019/11/nothings-too-good-for-man-who-beat-alex.html

Effie Deans is a pro UK blogger who works at the University of Aberdeen. She spent many years living in Russia and the Soviet Union, but came home to Scotland so as to enjoy living in a multi-party democracy! When not occupied with Scottish politics she writes fiction and thinks about theology, philosophy and Russian literature.
Previous The slaves of the fathers
Next The World According to Dumas