The UK is facing an exciting future as a result of Brexit.  We have a golden opportunity to configure the UK as a business entity that benefits its workers and hence the population of Britain.

Now that we are freed from many rules about government intervention and “level playing fields” between countries we can finally remodel the economy for the twenty first century. The following steps will lead to economic growth.

The government should replace GDP figures with GDP per capita figures as a measure of economic success.  This will stop governments from pumping up migration and declaring that 1% extra GDP growth due to a 1% rise in working population is a “huge achievement” – it isn’t. Just increasing the population may raise overall GDP but does not make individuals any richer.

The crucial rule for re-modelling the UK economy is that business people do business better than civil servants.  The government should, and must, intervene in the growth of medium sized companies but this is best done through share ownership rather than executive control.  When investing in medium sized companies the Government would hold at least 51% of shares at first.  This would allow it to create a “golden share”, enabling the Government to prevent the foreign purchase of the company, if so desired.  The point of government intervention should be to accelerate the growth of successful businesses and retain them under British control so that profits are ploughed back into the UK.  The Government should maintain three Investment Councils that compete with each other to grow those medium sized companies that promise to be the foundation of future prosperity.  Any failing Investment Councils would lose some senior staff and funds as a penalty.About 60% of all employment in the UK is provided by small and medium sized businesses.  You wouldn’t believe this from the UK media and politicians who regard big business as the substance of the economy.  The UK needs to begin lionizing independence.   The shopkeeper who deals with everything from employment legislation to weathering storms such as COVID19 is a far more mature individual than any senior civil servant, media employee or academic.  They also embody the essence of the idea of freedom, they make their own world.  The people who run small and medium sized engineering units, wholesalers, shops, builders etc. are the history of this country and its future.  It is their spirit that keeps the idea of freedom and liberty alive.

The Internet should be brought under Government control.  There should be a National Firewall to make the Internet secure for business, to stop political interference in UK politics and to guard the Internet of Things.  Twitter, which is run by a billionaire who routinely interferes in politics, should be banned and UK replacements for social media encouraged.  Amazon and Ebay should be regulated so that they operate from UK subsidiaries that are constituted as separate companies. They should only offer UK products in normal use and foreign sourced products should require a further level of login and authorisation.  These changes would be phased in over 10 years.  UK replacements for foreign sales emporia such as Amazon should be encouraged (See Investment Councils above).

The employment of Internet based staff in foreign countries should be regulated.  Any company doing this should demonstrate that they are providing the same levels of employment protection, health, training and pensions for those staff as they would have in the UK.  UK Taxes should be levied on the remuneration of foreign staff.  It will soon be evident that the employment of foreign staff via the Internet is just a way of driving a coach and horses through UK employment law and social provision.

Local authorities should have up to 50% of Councillors elected as “Enterprise Councillors”.  Their role would be to oversee the development of the local online and physical marketplace and ensure that local technical facilities and training are available for local companies.  They would have the power to insist that ISPs provide a local area gateway for the Internet with easy access to local online markets.  The Enterprise Councillors would also be responsible for bringing together local manufacturers, services and consumers, would ensure that the Council used local products and services wherever possible and would reward businesses that benefited the local economy with rate rebates.  Local representatives would sit on regional enterprise councils. Local Authorities must be more than organisations that provide social services and road repairs.

Investment should favour high technology manufacturing using techniques such as 3D printing of metals and enhanced automation.  The UK must have its own battery, wind turbine, solar power and hydrogen businesses. Serious consideration should be given to establishing a microchip production facility in the UK.  The UK should use its domestic Internet, protected by the National Firewall, to develop powerful information systems for internal trade, production and finance.

Monopoly consumers such as the NHS should be charged with acquiring a strategic minimum of goods and services from UK producers.

In general the Government itself should acquire goods and services from UK sources where these are competitive.  Requirements such as government business being less than 50% of a company’s turnover before a company can provide supplies should be removed.  If a Government Department is worried about security of supply it should use multiple UK suppliers rather than a single, giant Multinational Corporation based in China.  There should be a tribunal where UK suppliers can challenge UK Government purchasing.

Technical Universities and Colleges etc. should focus on commercial services such as business software, engineering, online entertainment,pharmaceutical production,  consumer electronics and communications and should provide free expertise and free facilities for small businesses.  University staff should provide a small fraction (c.10%) of time to local businesses where these desire support (including the development of business accountancy, business banking and other service products as well as technical support from the formulation of lotions to AI).  Universities should be organisations that deal with reality as well as postmodern narratives.

The UK government needs to create a feeling that the population and land of the UK is a single business.  This is the truth and needs to be said.  The EU funded numerous educational projects to undermine the independence of its member states and it is essential to reverse the damage these have done.  A project is required to divert education and the media, especially the BBC, away from an imaginary Internationalism.

Humanities faculties at universities should be carefully inspected for biased employment practices.  Ideally the staff in these faculties should be from a similar political spectrum to the population at large. The same rule should be applied to the Public Broadcast Media.  The “old school tie” has been replaced by even worse practices such as political censorship and this must be stopped.  New, independent units under management that is centrist should be established in Humanities Departments using existing funds.

Restructuring the UK Economy after Coronavirus

Coronavirus a wake up call

If we rely totally on foreign imports and services there will be no work.

COVID19 is a wake up call for Government Economists.  They should revisit the data on the 1929 slump and learn what actually happened.  Economists widely tell a story about the slump that maintains that protectionist measures were responsible for exaggerating the banking and economic crisis.   The actual data shows that the global crisis of 1929 was caused by excessive international interdependence of banking, trade and manufacturing.  The reduction of this interdependence led to strong growth until it recurred in the 1970s. 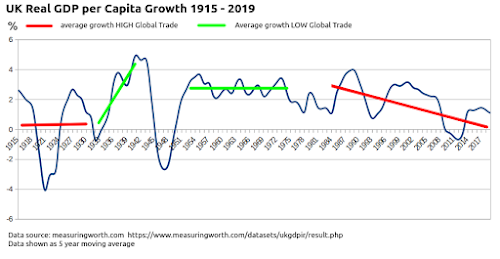 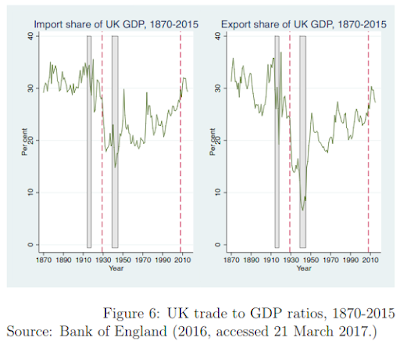 Please look at these graphs carefully and compare them with the GDP growth above. They are mirror images.  Strong growth accompanies drastically reduced international trade.

The slump was due to the instability of global trade and national prosperity recovered after that trade was halved.  Our economies became stable until the next rise in International Trading that began in the 1970s with membership of the Common Market.  In the 1970s we witnessed the collapse of manufacturing employment as a result of the negligently sudden removal of tariffs, in the early 1990s there was a recession, in 2008 financial crisis and now the COVID19 recession.

There is a straightforward lesson from history: intensive International Trade carries risks that are not worth taking.  If the global economy is insufficiently diverse and too interconnected events in countries far away can precipitate global meltdowns that take us with them.

The solution today, as it was after the 1929 slump, is to ensure that domestic industry is healthy and the economy is not controlled by the multinational corporations that mediate International Trade.  A limit of around 45% of GDP should be the target upper limit for Imports+Exports and exports should equal imports.  This is optimal global trading.

This post was originally published by the author on his personal blog: https://pol-check.blogspot.com/2020/07/post-covid-post-brexit-reconstruction.html

Dr John Sydenham has worked in International Pharmaceuticals and for one of the "big four" International Consultancies. He ran a successful company for 15 years and after selling the company devotes his time to travel, science, black labradors and freedom.
Previous The SNP would make all Scots poorer
Next Macron’s geography lesson