It is difficult to write about a fast-moving conflict with limited information and much disinformation. But it is impossible to write about anything else as every other topic looks trivial. I am uninterested in the domestic politics of the UK and cannot bring myself even to notice whatever Nicola Sturgeon might be saying about it or anything else.

The 2019-2022 pandemic is as significant historically as Spanish flu 1918, not because of the numbers that it killed, but because for the first time in history we attempted to stop the spread of a respiratory illness by isolating whole populations from each other. It already looks like an overreaction and a mistake. Longer term history may judge it still less favourably when it can see the damage done to the lives of those who were locked up.

We don’t know yet how well history will remember the 2022 Ukraine Russia War. The First Balkan War 1912-1913 killed over 400,000 but is remembered only by specialists now. But if there is a moment when history judges the Covid Pandemic to have ended it will be this.

When Putin threatened us with nuclear conflict, worrying about an illness with a relatively low Case Fatality Rate looked self-indulgent. When tower blocks are being shelled and defenceless civilians bombed a facemask looks like a rather flimsy defence against the dangers of the modern world.

People in Ukraine are not bothering much about Covid and that extends to their neighbours in places like Poland. There are more important issues to worry about and we can no longer hide in our houses.

While fighting the Cold War we chose to arm the enemies of the Soviet Union. In the short term arming bandits in Afghanistan might have looked like a good idea as they made life difficult for the Red Army, but encouraging Jihad looked less wise as these same people were able to defeat the West in both Afghanistan and Iraq. So too Nixon in China now looks to have awakened a threat that is long term even more dangerous than the Soviet Union.

We have helped to create a China that is a more dangerous foe because it has a first-rate economy on which we depend and because it is far cleverer and subtler than the Soviet Union ever was.

There is little doubt that Putin would not have acted in Ukraine without the permission of the Chinese and that the Chinese have long term goals which they hoped to achieve by means of the Russians. These include the Russian Far East, Taiwan and Chinese hegemony over much of Asia and the Third World.

China has killed far more in Xinjiang than Putin has in Ukraine, but has done it in such a way that the West barely notices and doesn’t much care. We are fickle about which conflicts make us angry. It largely depends on what the media chooses to put on our televisions.

But there are some grounds for optimism. Ukraine has already given Putin a bloody nose. The Ukrainians have performed better than expected and may yet prevail.

Even if they are defeated, the stand they have made will be like the Warsaw Uprising in 1944. It was defeated and led to the destruction of the city, but in the decades following the Poles submitted least of all Eastern Europeans to the Soviets and the example of their heroism in 1944 sustained them until they eventually gained their freedom in 1989.

So too with Ukraine. We don’t yet know if Zelensky’s bravery will prevail. It deserves to. We must hope that it will. But such heroism is not in vain no matter what happens. It is an example that will inspire Ukrainians not yet born. That example matters.

The West too has performed much better than expected. Putin thought there would be limited sanctions, but his fury demonstrates his miscalculation.

We are supplying the Ukrainians with weaponry and providing other services. Those Ukrainians who flee will be looked after.

The West has more resolve than I expected. Long years of decline and folly had made me cynical. But I believe we have made a stand. It is too dangerous to let Putin carry on. He begins to remind me of the Repin painting of Ivan the Terrible and his son.

Putin’s Russian nationalism involves the idea that Ukrainians are relatives but subordinate, like children. Well, he has just killed the child he professes to love. His invasion has meant that Putinism has no heir and Russia is moving towards a new “Time of Troubles” just as it did when Ivan left the throne vacant.

It is too dangerous to leave a man in power who threatens us with nuclear war because we have imposed sanctions and his attack is not going as well as expected. The threats coming from Russia will not be forgotten nor forgiven.

The price for returning to normality, for removing sanctions and travel restrictions must not merely be regime change, but a change in attitude on the part of Russia.

No one has threatened Russia since the end of the Cold War. There was no credible threat from Ukraine or any of Russia’s other neighbours. Yet it has been invading neighbours and poisoning opponents in Salsbury as if it could do as it pleased. There are now going to be long term consequences, until and unless the Russian people decide to rejoin the civilised world.

Just maybe the West will also wake up to the far more subtle but much more dangerous threat coming from China. Putin only has military power plus nuclear weapons. He now has no economy. But China has all of the military power that Russia has and more plus an economy that gives it a strength that Russia lacks.

How the West deals with both Russia and China or better still how we achieve lasting peace between East and West we can hope is the story of the decades ahead told by the historians of the future.

This post was originally published by the author on her personal blog: https://www.effiedeans.com/2022/03/putin-terrible.html

Effie Deans is a pro UK blogger who works at the University of Aberdeen. She spent many years living in Russia and the Soviet Union, but came home to Scotland so as to enjoy living in a multi-party democracy! When not occupied with Scottish politics she writes fiction and thinks about theology, philosophy and Russian literature.
Previous A great moment but challenges remain
Next British Volunteer Hackers Build a Missing Persons Platform for Ukraine In 72 Hours 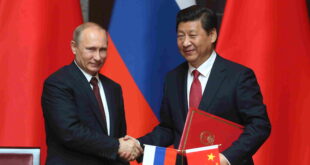 When the Berlin Wall came down, the Soviet Union collapsed and China briefly looked as …