Scottish nationalism is based on historical ignorance

Scottish nationalists frequently talk about the countries that have become independent and that they never regret it. They list various new nation states in Europe and places that were formerly part of empires. But what they never mention is the number of places that were formerly countries and now are not. They usually don’t regret their unity either.

If you look at a map of Europe in 1815 you see both forces at work. Secession movements caused the Austro-Hungarian, Russian and Ottoman Empires to split into countries like Greece, Romania and Slovakia. These splits were usually because of linguistic, religious cultural or geographical differences. But where people live geographically contiguously and where they speak the same or similar languages and have similar religious and cultural practices the tendency is for people to unite.It is for this reason that both Italy and Germany united in the 19th century. I have lost count of the formerly independent countries that used to be in Germany. Italy too was made up of places with quaint names such as the Kingdom of the Two Sicilies. Where was the second Sicily? I can’t seem to find it. 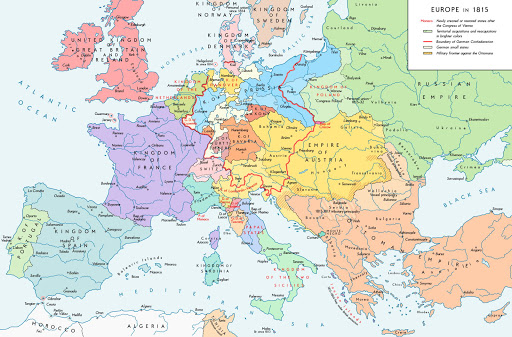 Scottish nationalists have an idea that there is something exceptional about Scotland. But there isn’t. The number of formerly independent countries that have ceased to be independent since 1707 is enormous. The vast majority of them form countries that don’t have serious secession movements and are quite happy being part of a greater whole.

The process by which both Germany and Italy united was by means of war. Saxony became part of Germany essentially because of the Austro-Prussian War (1866) where it fought against Prussia, and the Franco-Prussian War (1870-1871) which united Germany into an Empire. The Saxons were not given much choice.

Is Saxony any less of a country than Scotland? It has an equally long history. The fact that most Scots are unaware of this history does not change it. Most Saxons are unaware of Scottish history.

Saxons seem to be quite happy to be part of modern Germany. They were part of an independent East Germany until 1990, but they were quite happy to reunify with their Western fellow citizens.

When there are elections in Germany the different parts, some of which are formerly independent countries, vote for different political parties. No one complains if Saxony votes for a left-wing party but Germany on the whole elects a right-wing Government. If the whole of Germany voted to leave the EU, no one would say that Saxony was dragged out against its will if Saxony voted to stay. No one would even say that East Germany was dragged out against its will under those circumstances. Having decided to be united Germans, no matter which formerly independent country they come from, have to accept the will of the majority.

What is the difference between Germany and Britain?  What indeed is the difference between Britain and every other nation state in Europe? The difference is simply this. People from Germany, Italy or France think of themselves as primarily German, Italian or French. They do this because they were forced to think this way. Their education systems emphasised the unity of the nation state and the subordinate status of the parts that were formerly independent.

It is for this reason that Scotland kept a slightly different legal system, which anyway is far from being as exceptional as Scottish nationalists claim it to be. After all different laws apply in Michigan and Indiana.

If like the French we had spent centuries annulling regional difference, we would have no problem with secession now. There is only one language in France, one education system and one identity. But this didn’t happen accidentally. It happened by design. The British by contrast were so confident in ourselves and so liberal that we didn’t see the need to assert that there was only Britain and that the parts were mere regions. Unlike anyone else in Europe we celebrated that we were made up of four nations and then wondered why we had a problem with nationalism.

Scotland is no different from any other formerly independent country in Europe. We have no more legitimate grievance than Saxons. We have rather less in fact because we were not conquered but rather took over the English crown. Our sense of being a separate country with a separate identity alone fuels our nationalism and desire for separation. But there are no good grounds for separating people who speak the same language and share the same small island. The only difference between the British people is an accent and a tendency to vote for different political parties. If that is the grounds for divorce then no country, including Scotland, could long endure.

This post was originally published by the author on her personal blog: https://www.effiedeans.com/2020/08/scottish-nationalism-is-based-on.html

Effie Deans is a pro UK blogger who works at the University of Aberdeen. She spent many years living in Russia and the Soviet Union, but came home to Scotland so as to enjoy living in a multi-party democracy! When not occupied with Scottish politics she writes fiction and thinks about theology, philosophy and Russian literature.
Previous Brexit – the True Story
Next Thatcherism – the only way forward