When I stand at my bus stop waiting to go home I watch the lorries pass by. Nearly every single one has a combination of Scottish flags somewhere in the cab. There is usually a phrase about Scotland being bonnie or being forever. Sometimes there are bits of tartanry dotted about, pictures of men in kilts or pipers piping. I don’t believe I have ever seen a lorry in Aberdeen which expresses the fact that it is from Britain and likes Britain. Are these lorry drivers all Scottish nationalists? Possibly they are. However it is statistically unlikely. But then this is our problem really. Vast numbers of Scots may vote to remain in the UK, but their identity is exclusively Scottish. Their allegiance is weak and their support temporary. It is for this reason above all that we have a problem in the UK with Scottish nationalism and why it remains a threat.

It’s worthwhile trying to understand the nature of your opponent. The SNP are consummate liars or else perhaps they deceive themselves. It’s not always easy to judge from outside. For years they argued that the reason they wanted independence was that Scotland voted Labour while the rest of the UK voted Tory. Vote for independence because then you will get what you voted for. Having used that argument to destroy Labour in Scotland, they then argued that we shouldn’t vote for Labour because it isn’t really a left-wing party. Labour were really “Red Tories”. Well any left-winger could hardly wish for a more socialist leader than Jeremy Corbyn. How many SNP supporters are now going to switch back to Labour because now we’ve got the real deal? How much more left-wing do you want Labour to be before it once more is worth your vote? But now it turns out that Scottish nationalists don’t want socialism after all, they just want independence. So their whole argument has turned out to be founded on a lie.

There was some shock the other week when she wrote something about Scottish independence transcending other issues. But of course she is right and she is being honest. As I have long argued, there is only one argument for Scottish independence, but it is a good one. People who feel patriotic about Scotland and who feel that Scotland is their country ought to want Scottish independence. This is exactly the same argument that people have used through the centuries to achieve independence. Norwegian patriots wanted their country to be independent, as more recently did Latvian and Estonian patriots. This appeal to patriotism is very strong and powerful. When it becomes strong enough it does indeed transcend other issues. No-one can predict what will happen to an economy. Who can really weigh up the advantages and disadvantages of political action? No-one can pretend to guess what the UK will be like in twenty years’ time because of Brexit. Nor can anyone predict what Scotland would be like in fifty years’ time if we voted for independence.

Crucially however as I have also frequently argued the nationalist argument is circular. Nicola Sturgeon and others always argue that it would be better for decisions about Scotland to be taken by people in Scotland. But this argument is equally valid if I say either that it would be better for decisions about the UK to be taken in the UK or alternatively it would be better for decisions about Aberdeenshire to be taken in Aberdeenshire. The standard response from Scottish nationalists is that neither the UK nor Aberdeenshire are countries. What this amounts to then is that a country ought to be independent because it is a country. It is only because they always assume that Scotland already is an independent country that they can argue that it ought to become one. What this circularity means however is that for Scottish nationalists the argument is fundamentalist. They may pretend that they want independence in order to obtain something, but this is not true. They want it in and of itself.

The mistake that everyone has been making for the past twenty or thirty years is to fail to realise that we are up against fundamentalists. There is nothing whatsoever I can do to persuade Nicola Sturgeon to give up her goal of Scottish independence. She will want this all of her life. She was, no doubt, brought up this way. She will live this way and she will never change. Such an opponent is powerful. John Wayne in the Searchers called it a “critter that’ll just keep comin’ on.” If you’ve seen that film you’ll realise the power of obsession and how it can be dangerous with a touch of madness in it. Beware the fundamentalist. They are capable of anything.  Look at the news if you need any help with this idea. 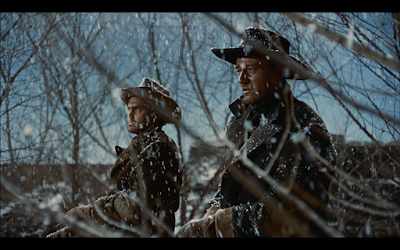 Given that people like this will not change, it is futile to make concessions to them. Nicola Sturgeon wants Theresa May to tell her all about the Brexit negotiations. Why help your opponent? Tell her nothing. The SNP want the softest possible of Brexits. Why give your opponent anything. Rather if they want this, do the opposite. Some people think if only we have a soft Brexit then the SNP will have no reason to ask for independence. But this is to misunderstand the nature of our opponent. They are patient. They will wait and use this concession to achieve their goal.

This is our problem. The vast majority of Scots are like my lorry drivers. They already have one foot in the Scottish nationalist camp. If you have been brought up to think of yourself as exclusively Scottish then it is an easy thing to persuade you to join those who want independence. How else was it possible for Labour to lose most of its support? They already were Scottish patriots, it was a small step indeed to turning them into Scottish nationalists.  A patriot ought not to give a damn about the price of oil or whether independence would make you poorer.

The reason though that Nicola Sturgeon is going down the fundamentalist route is that she realises that after Brexit she has no other argument. It is a sign of  her strength but it is also a sign of her weakness.

It is not necessary of course for any of us who feel British to give up our Scottish identity. We can be both. But we must learn to express both. The key to defeating the SNP long term is to increase the sense of British identity throughout the UK.

Nicola Sturgeon says that she feared that the No campaign would be positive and Pro British telling us about all the wonderful things the UK had done in the past and would do in the future. She is right. You can only fight patriotism with patriotism.

We must keep the utilitarian arguments in the background. Everyone knows already that Scottish independence would make you poorer. But this argument does not help us and sometimes hinders us. We must never be negative about Scotland, but only positive about the UK. We must also start flying our flag, which after all contains the saltire. Only when I start to see Scottish lorry drivers with union jacks in their cabs will I feel that our country is truly safe.

This post was originally published by the author 30 September 2016: http://effiedeans.blogspot.com/2016/09/scottish-nationalism-has-reached.html

Effie Deans is a pro UK blogger who works at the University of Aberdeen. She spent many years living in Russia and the Soviet Union, but came home to Scotland so as to enjoy living in a multi-party democracy! When not occupied with Scottish politics she writes fiction and thinks about theology, philosophy and Russian literature.
Previous Savouring Traditions: Sardinia
Next Betrayal of Britain- Introduction