Whichever fat fingered BBC technician “accidentally” substituted some film of a psychotic rampaging gorilla for the latest film of Nicola Sturgeon making threats deserves some sort of award. Give that man a Nobel Prize for services to humour. There is a long history in Britain of turning people like Sturgeon into a figure of fun. Throughout our history we’ve been coming across little people who like to give us ultimatums. 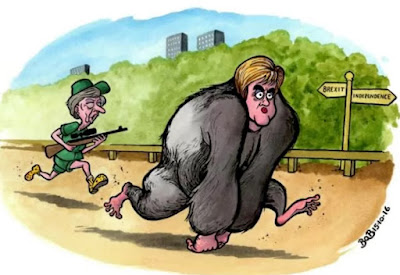 They usually look rather funny even when they try to look stern and serious. They gesticulate as they whip up a crowd of adoring worshipers. Sometimes they bang their shoe on the table as they tell us that they will bury us. Other times they simply underestimate us. Britain will have its neck wrung like a chicken in three weeks said some little man who has now been forgotten by history. “Some chicken … some neck” said a man who hasn’t been forgotten by history.

Since June we have all been waiting for disaster. The least Polish sounding man in history Donald Tusk keeps making threats. Perhaps someone on the BBC could push the wrong button again and show a clip of a rampaging elephant in a kilt. EU politicians keep telling us how they will make an example of Britain by showing that anyone who dares to leave the EU will be punished. It’s like a re-run of the Grexit crisis of 2015. Stern Angela Merkel wasn’t willing to give anything to Greece and although the Greek people were brave enough to say No their Government wasn’t. But then Greece has a long history of being a vassal state and hasn’t done anything of importance since Aristotle. Somebody should remind these people that Britain in not Greece.

If the EU is a prison with guards who are ready to shoot anyone who dares to leave, this is not a reason to stay. This is a reason to start digging tunnels called “Tom”, “Dick” and “Harry” and once more show our European friends that there is a way to escape tyranny.

Nicola Sturgeon desperately needs taking down a peg or three. In my local SNP shop you can buy framed Sturgeon portraits to hang on your wall. The cover of the last SNP manifesto consisted entirely of a picture of her. This is outside the normal conditions of British politics. How many Labour supporters had posters of Harold Wilson? How many Liberals had posters of Joe Grimond? For goodness sake few indeed were the Democratic Unionists who had posters of Ian Paisley. A person with a framed picture of Margaret Thatcher would be considered an obsessive even by Tories. We laugh at such people. We prick their bubbles. No one but a deluded fool commissions a monument to themselves with one of their quotes attached to a rock that will endure forever. It won’t last by the way. It’s no more permanent than the Ed Miliband stone. These people always build monuments to themselves but they end up in the graveyard of statues. “Two vast and trunkless legs of stone”. Nicola’s supporters may be tempted to rename Irvine Sturgeongrad, but these sorts of names don’t last. 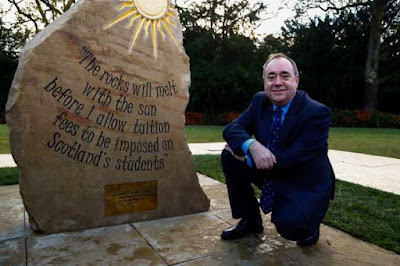 But you must take me seriously cried the little gorilla. This time I really did see the wolf. OK I confess the last few times I was making it up, but this time you I’m really, really serious. I imagine the wolf may struggle with actually swallowing this gorilla, but then again this isn’t actually a problem because there isn’t really a wolf. There never was a wolf, just a little gorilla that keeps crying “wolf”.

There was quite a lot of rather ludicrous fuss on the news about Nicola Sturgeon’s latest threats. But what it amounts to is this. She is going to start consulting about a bill over which the Scottish Parliament cannot debate because it is outside its competence. The Scottish Parliament likes to have debates about things it doesn’t control. Just like Nicola Sturgeon it loves to wave its arms around making gestures, looking stern and talking big. The correct response to this is laughter. It is for this reason above all that Nicola the gorilla is the best peace of political journalism I’ve seen all year.

Figures of fun keep saying funny things. It is this above all that makes them figures of fun. But what is it that makes something funny. It is above all contradiction. The picture of a priest caught glancing back at a pretty woman in a mini-skirt is funny because of the contradiction between what the priest should be thinking and what he is actually thinking. The humour in Nicola Sturgeon’s speech is her portrayal of other people in Britain as xenophobes. The humour is the contradiction between her opinion of herself and her own values and what they are in reality. The essence of Scottish nationalism is xenophobic by definition. For a xenophobe to complain about xenophobia in other people is always in the end humorous. Once more the correct response is to laugh.

Nicola Sturgeon just like every other Scottish nationalist cannot bear to live in the same country as people from England, Wales and Northern Ireland. If this isn’t xenophobia what is? What is it about these people from England, Wales and Northern Ireland that she so dislikes that she cannot bear to share a country with them? It is that they are not Scottish. Again, if that is not xenophobia, what is?

The essence of Scottish nationalism is that people from other parts of the UK do not have a shared identity with me. If they were to accept that other British citizens had a shared identity with Scots, then there would be no more problem for Scots to be outvoted in a UK wide election than for Scots to be outvoted in a Scotland wide election. The reason that Nicola Sturgeon cannot bear being outvoted is because these people outvoting her are not Scots.

Moreover she is saying that she cannot bear to live in a country where these non Scots can outvote her. She would have no problem at all if only Scots could outvote her. Why do people like Nicola Sturgeon so dislike Westminster? The reason is because Westminster is elected by people from England, Wales and Northern Ireland. Well what is the problem with that? The problem is that these people are not Scots. Again if this isn’t xenophobia, what is?

At Appomattox Court House in 1865 there was a famous conversation. Robert E. Lee on discovering that one of the Union officers present Ely S. Parker was descended from the Seneca tribe remarked “”It is good to have one real American here” to which Parker replied “We are all Americans”. General Grant forbade any cheering on the grounds that “The Confederates were now our countrymen, and we did not want to exult over their downfall”. 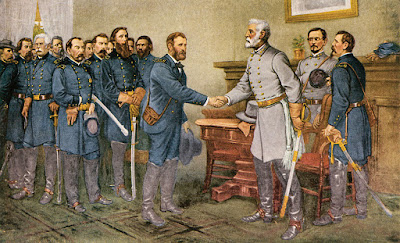 Perhaps it was this moment that lead to peace in the USA such that now it is unimaginable that there should ever more be secession. It is the refusal of people like Nicola Sturgeon to accept that she has a shared identity with her fellow citizens that means for her the war is never over. Imagine if she had another referendum on independence and she lost it again? Would she then accept that she had been defeated finally? How many days would it be before she was demanding another chance? Referendums only have a point if they can decide an issue once and for all. If they cannot do this, they only cause division. The UK has had far too many referendums. I voted to leave the EU, but I would gladly stay if the condition for doing so was that there would never be another referendum in the UK.

But why can’t she bear to live in a nation state with 60 million Brits. The reason is because they are Brits and she is a Scot. At bedrock this is Nicola Sturgeon’s problem with the UK. She is Scottish, while they are British. This is identity politics at its worst. But then all nationalism at root is always about identity politics.

Scottish nationalists like to try to hide the roots of their philosophy. They have all been carefully taught to describe themselves as civic nationalists.  But this is a mere fig leaf. It is very easy indeed to test the limits of civic nationalism.  How would it be if a few hundred thousand people from other parts of the UK decided to move to Scotland? By the standards of civic nationalism they would all immediately be Scots. But what if these people continued to feel British too? What if they opposed Scottish independence because they felt the same identity as people in other parts of the UK? What if these few hundred thousand people put Scottish independence beyond the reach of the SNP forever? Would you really still be so welcoming?

No-one became a Scottish nationalist because of the idea of civic nationalism. Scottish nationalists vote for the SNP because they feel patriotism only about Scotland and not about the UK. If you felt patriotism about Britain you thereby would not feel outvoted any more than someone from Vermont feels outvoted if he votes for one presidential candidate, but this candidate loses. You only feel outvoted if you think that these others who outvote you do not share your identity. If you thought that people in other parts of the UK were your fellow countrymen you would not complain about the EU referendum. It’s only because you think they are not your fellow countrymen that you complain. But what is someone who is not a fellow countryman. He is a foreigner. What is someone who complains about being outvoted by foreigners? He is a xenophobe.

Scottish nationalism is grounded in xenophobia. Fundamentally it is grounded in dislike for our large neighbour. The UK in fact is one of the least xenophobic countries in Europe. We are not threatened by parties of the far right like those that exist in many European countries including France, Austria and Greece. Most Brits welcome people from elsewhere and we are willing to share our identity with them. It is not xenophobic of course to want to limit immigration, otherwise there would be no such things as borders. But like it or not ever Scot is a British citizen. To be unwilling to share your identity with someone who is a fellow citizen is clearly discriminatory. To act towards your fellow citizen as if he were a foreigner on the grounds of where he lives, or the accent that he has is clearly a form of prejudice. To make a speech describing others as xenophobes while leading a movement that is itself inherently xenophobic is comical. It’s really is high time Nicola Sturgeon became a figure of fun.

This post was originally published by the author 14 October 2016: http://effiedeans.blogspot.com/2016/10/its-scottish-nationalism-that-suffers.html

Effie Deans is a pro UK blogger who works at the University of Aberdeen. She spent many years living in Russia and the Soviet Union, but came home to Scotland so as to enjoy living in a multi-party democracy! When not occupied with Scottish politics she writes fiction and thinks about theology, philosophy and Russian literature.
Previous How to #win your first day on the job
Next Britain Stronger In Europe Tacitly Admit They Were Lying The Whole Time