Slavery and British Wealth in the 18th and 19th Centuries

The Industrial Revolution occurred in the UK in the eighteenth and nineteenth centuries. How far was this due to slavery or other intrinsic factors?

There is clear evidence that the Industrial Revolution has its roots in the early to mid eighteenth century. The world’s first, large iron bridge was built at Ironbridge in 1779 so the mining, casting and forging technology to support such a large commercial project must have been available before this.

We know that UK coal production was growing exponentially from the beginning of the eighteenth century:

And that pig iron production doubled in the first half of the eighteenth century and grew strongly after 1775: 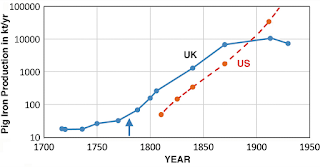 UK Copper production was also climbing steadily at this time: 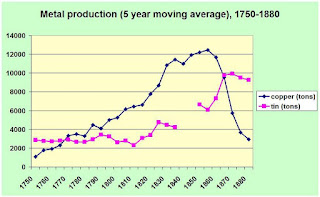 British manufacturing also had a steeper growth than elsewhere from 1750: 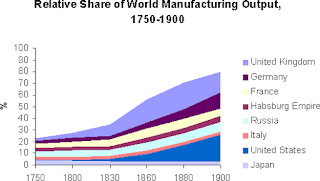 In the first half of the eighteenth century fixed steam engines were being used in Britain for power in pumps etc.  The building of canals gets underway from 1750:

Turnpikes (quality toll roads) begin to be built in quantity after 1730 as shown below:

All of this gives a date of around 1730-1750 for the start of the Industrial Revolution.

There is a postmodern school of thought that the Industrial Revolution in the UK was due to slavery and hence powered by sugar, not coal, metallurgy and ceramics etc.  The maximum possible values for sugar, cotton and tobacco plus all associated trade and the GDP growth due to slavery in the colonies themselves are added together to inform this argument:

However, even with the massaging of data it is difficult to get a figure of more than about 2% of imperial GDP for sugar and cotton until after 1780.  Imperial GDP (as shown in the graph above) includes the growth of the home economies of the USA and other colonies at that time so we cannot be looking at more than about 1% contribution to the GDP of the UK from slave plantations.  The main beneficiaries of cotton, tobacco and sugar production were the colonists in places like Virginia, especially after 1776.  Notice the boom after 1776, the author did not remove the USA from the data after this date.  This answers the much asked question: “if slavery did not benefit the UK economy why did it happen?”.  Slavery benefited the slave and plantation owners in the colonies but had little impact on the UK economy.

UK GDP was unaffected by the abolition of slavery: 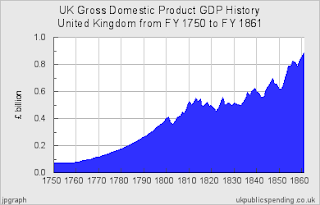 There is no sign of the instant crash of 10% in the 1830s that should have happened upon abolition if we are to believe the inflated figures of Ronnback etc., instead there is a 10% rise.

And don’t forget the French who helped supply the Americans with slaves after 1776: 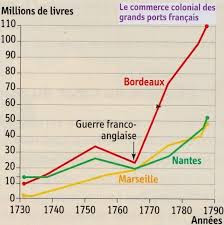 The Industrial Revolution was powered by coal, not sugar. The beneficiaries of slavery were the slave plantation owners and colonies where they lived, not Britain.  On reflection this is blindingly obvious and it could only be the febrile state of modern politics and the media, and the disingenuous academics making careers from this, who would consider slaving, the archetypal economy of the ancient world, to be the power behind the Age of Steam.

What is surprising from this and other analyses of British imperial trading is that the advantage of the British Empire for Britain itself was to project power not to enrich Britain. Britain was thriving on its own booming domestic market.

There is no case for slavery powering the Industrial Revolution.

Eltis, David and Engerman, Stanley L., ‘The importance of slavery and the slave trade to industrializing Britain’, Journal of Economic History, 60, 1, 2000

Rönnbäck, K (2018). On the economic importance of the slave plantation complex to the British economy during the eighteenth century: a value-added approach. Journal of Global History, Volume 13, Issue 3. November 2018 , pp. 309-327

This has figures that include the USA as part of Britain:

“Another way of measuring the magnitude of these activities is therefore to analyse the aggregate economic values involved in the transnational value-chains related to the Triangular Trade and the American plantation complex, including all factor incomes and not just profits. It is this approach that will be used in this article.”

This post was originally published by the author on his personal blog: https://pol-check.blogspot.com/2020/10/slavery-and-british-wealth-in-18th-and.html