When the tech giants rose to power I had an uneasy feeling that this was the start of something dangerous.  What is to stop companies like Google, Twitter and Facebook from simply, automatically, suppressing political opinions that they detest?  What is to stop them from taking money to do this?

China already uses its equivalent of Google – Baidu – to stop any freedom of speech.  Search for Tienanmen Square on Baidu and you will find that the reports of deaths and demos are a myth.  Sadly the same thing is happening here.

The US website Breitbart, which by UK standards is fairly right wing, is an interesting case.  It was savagely cut from visibility in July 2017 and has recovered to an apparently artificially imposed ceiling in March this year after complaints.

Breitbart is the only site I have seen with deeply suspicious visibility figures.  The Guardian seems little affected (theguardian.com is a recent internet site, it was guardian.co.uk): 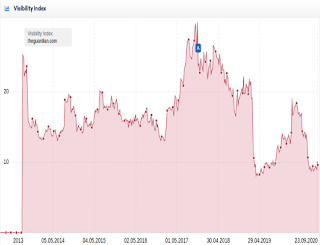 The Daily Mail seems to have taken a heavy tumble:

It is obvious that with information comes power and also obvious that those in control of the information will not be able to keep their hands off the supply.  There is an interesting account in the Daily Caller of how Google employees felt they should be helping the Democrats in any future election. Google uses the practices current in China of employing people to rate internet sites or ban them.

These practices were undoubtedly started by the need to screen terrorist sites but the line is becoming increasingly blurred into outright bias.

Do British regulators and Parliamentarians have the courage to defend democracy?

It is not just Google, there is evidence that Twitter is also a menace.  Facebook appears to be the least biased of the three giants although there is evidence that it relies on “fact” checkers that have an agenda. This is particularly dubious in the case of fact checking fast moving scientific developments such as the origins of COVID19.

See Restructuring the UK Economy after Coronavirus which details how the Internet must be tackled.

This post was originally published by the author on his personal blog: https://pol-check.blogspot.com/2020/09/google-twitter-facebook-are-all-biased.html

Dr John Sydenham has worked in International Pharmaceuticals and for one of the "big four" International Consultancies. He ran a successful company for 15 years and after selling the company devotes his time to travel, science, black labradors and freedom.
Previous Sharing a trench with Starmer
Next The British People must stand up for liberty once again