The school history curriculum in the UK often skips the British Empire.  This leaves children with little knowledge of what actually happened and makes them prey to the fake history that is used by political movements to divide people, those who were born generations after the empires ended, into victims and oppressors.

The most salient feature of the British Empire is that it was initially gained as the spoils of war after continual attacks on England by other European powers during the seventeenth and eighteenth centuries. England was Protestant and in 1570, Pope Pius V sought to depose Elizabeth I with the papal bull “Regnans in Excelsis”, which declared her a heretic and so began two and a half centuries of war between England and Catholic Europe.  The Spanish and French largely lost these wars and in the process lost their footholds across large areas of the globe.

By 1914 the world was still divided up between empires with the British ascendant.  If you lived outside of Europe and North America in 1914 your future and that of your children was determined by which Empire ran or had run your part of the world.  The luckier ones had lived in the British Empire.  The least fortunate had lived in the Russian, Belgian, Portuguese, Chinese, Ottoman and Spanish Empires. 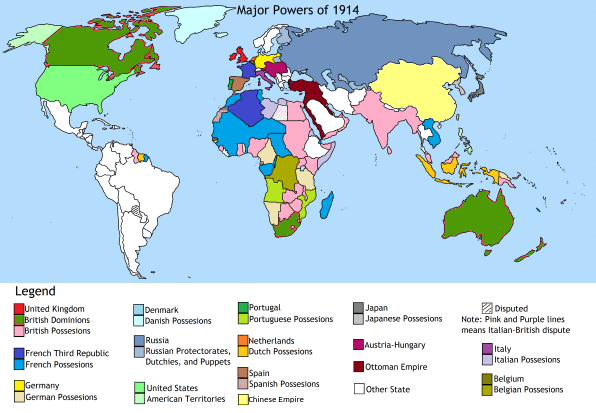 In Britain we have many people who have migrated here from what were once parts of the British Empire. They see the world as having been their own relatively small part of it and the British Empire.  The world was nothing like this. It is important that educators get this message across.

It is also important that educators show that it was the Agricultural and Industrial Revolutions that created the wealth of ninteenth century Britain, not its Empire. There is no pot of gold acquired from Empire that the British are still feeding on. Indeed, the UK lost much of its wealth in each of the two world wars and, by industry and determination, recovered to continue as a leading developed nation.

After the Second World War the Anglo-American Alliance had conquered most of the world.  As part of their settlement they dismantled the European Empires.  The British were severely damaged by the war and so, during the Cold War, were seen by the Soviet Union as the weak link in the Alliance.  The Soviets launched a massive campaign against “Imperialism” to detach the world from affection for the West.  They were undermined in this campaign by the intention of the British to voluntarily liberate its empire but it had considerable “success” by causing the deaths of hundreds of thousands of people as Marxist revolutionary movements attempted to destabilise countries as they became independent.

The campaign against imperialism was particularly successful among the British Upper Class intelligentsia which is why the UK still has factions that use “imperialism” as a wedge to divide British society.  These factions dominate the humanities and arts faculties of British universities, hire each other and suppress the publication of opposing views to continue their dominance. See Populism, Radicalism and Extremism.  Teachers can be seen as the victims of this radicalisation.

When teaching the “British Empire” educators should place it in its historical context and should not use it as a way to indoctrinate children with their own views by selecting events from the past and putting them in a modern context.  The classic example of this evil is to teach about slave transport and ask “were we right to have engaged in this?”.  “We” live now, the last of the Empire ended over two generations ago and slavery was abolished throughout the Empire about two centuries ago.  The only possible motive for such questions would be to polarise the class of innocents into black skinned victims and white skinned oppressors.  Another classic example is to present the Partition of India without discussing the roles of Jinnah and Nehru to make children of Indian heritage feel victimised and hate their own country (the UK).  Post-structuralist and postmodern interpretations of history (Historical Presentism) are deceitful and always politically motivated. Historical Presentism is not a harmless attempt at making history relevant, it is always an evil ambition to transmit political values into children and other innocents.

It is easy to teach the “British Empire”.  Put it in its historical context, ban Historical Presentism and stress that it is in the past, that it is history, it is not an indelible stain on a race.  Teachers must wake up from their latent racism and realise that if their indoctrinated venom against the British were used widely we would utterly hate the Germans, Italians, Chinese, Americans, Russians, Spanish, Belgians and French who have all done “worse” than the British by modern standards, but of course, modern standards are an absurd diversion from history.

This post was originally published by the author on his personal blog: https://pol-check.blogspot.com/2020/02/teaching-british-empire_11.html

Dr John Sydenham has worked in International Pharmaceuticals and for one of the "big four" International Consultancies. He ran a successful company for 15 years and after selling the company devotes his time to travel, science, black labradors and freedom.
Previous The English Appreciation Society of Scotland
Next The SNP must stay out of schools